I received a “Facebook Warning” via email yesterday saying a photo I had uploaded to “Courtney Sullivan's Stable” violated Facebook's “Terms of Use”, so it was removed.

Here is the photo I uploaded: 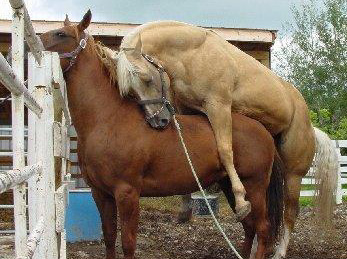 My caption was: Courtney Sullivans aren't known for falling asleep on the job!

According to the Facebook Warning, “Among other things, photos containing nudity, drug use, or other obscene content are not allowed, nor are photos that attack an individual or group.”

Hmm, nudity? Are you suggesting animals walk around wearing clothes? I'd venture to say that a picture of a dog in a sweater is more obscene than a dog with a shaved coat.

Drug use? No, unless the horses were only having sex because they were coked up.

Other obscene content? Not unless you consider animal-on-animal sex “obscene”, in which case Animal Planet becomes a pretty family-unfriendly channel.

Attacking an individual or group? Not unless Facebook really ran with the analogy, and I doubt they have time for that (although I bet customer service can be a pretty boring job in which you'd like to procrastinate on the internet – and hey, you're already at Facebook, what better way!).

As far as the prank though, so far so good: all 15 Courtney Sullivans are still members of the group! Atta girls!

I'm thinking of appointing a couple of them officers of the group, and hope they somehow overlook that notification in their Facebook. Now to think of some promiscuous officer titles…