Your Pet May Be Trying to Kill You

10 scenarios that point to an obvious death trap set by your pet.

As pet owners, we all like to think that our dog or cat loves us as much as we love them. In any relationship, there is the possibility that our feelings aren't being returned the way we want them to. Jealousy, envy, or the occasional bath could be at the root of your problems. Whatever the cause, here are ten possible life-threatening scenarios that you should be aware of.

If any of these situations seem familiar, maybe it's time you had a sit-down with your four-legged "friend" before it's too late. 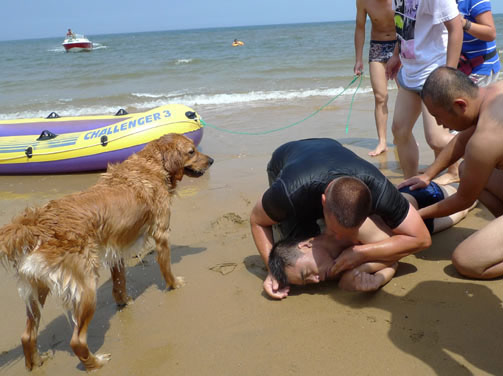 "Hey, listen… I was just trying to pull him in by his neck…"

1. There are only two occupants living in your apartment: you and your Angora cat. You step out of the shower into a steam-filled bathroom. To your horror, you see the word "Soon" written on the bathroom mirror. There are tiny paw prints and white fur covering the sink.

2. Your family is out for the day. You've decided to fix a faulty light fixture. While you're on a metal ladder, holding exposed electrical wires, your Labradoodle comes by and takes a leak on the ladder.

3. While relaxing in a bathtub filled with warm water, your German Shepard has "fetched" your cordless screwdriver and dropped it into the water. As he turns to leave, his tail "accidentally" pushes your portable hair dryer to the edge of the bathtub.

4. You're in bed sleeping on your back. You awake to find that your Maine Coon has covered your face with its entire body, and refuses to move.

5. It's dusk and you're upstairs in the bedroom. Your orange Tabby has been playing with her ball of yarn for hours. You're walking down the hallway towards the staircase, but you don't notice the yarn that is wrapped around the base of the railing and the leg of the end table that sits by the top of the stairs.

6. It's time for the annual block party. You're busy carrying boxes of decorations from your garage to the light pole down the street. As you leave the garage carrying the last box, you're about to step into a large puddle of motor oil that wasn't there before. You also don't notice that your collection of antique glass marbles is sprawled out over the driveway. Those weren't there before either. Your Rottweiler is sitting across the street watching you with his very oily paws.

7. You've decided to get a second cat, and want to get the old cat bed from the hall closet. As you open the closet door, you notice that the bowling ball that you keep on the top shelf is not in its bag. Everything goes black.

8. It's late at night. You look out the window and see that there's a light on in the garage. When you enter the garage, you notice that your car is running and its doors are locked. Though very puzzled, you know that you can fix this by getting the spare car keys from the house. At that moment, the garage door slams shut. You're coughing from the carbon monoxide fumes as you try to open the garage door. The door won't open because there is a large Milk Bone wedged under the door. You hear loud music coming from your house. You're wondering how this could be, since you live alone with your Labrador Retriever.

9. You're walking in the woods with your Siberian Husky. It's a beautiful day and you're enjoying the scenery. Suddenly, your dog starts to howl for no reason. You don't think anything of it and keep walking, figuring that your Husky will catch up with you. Just then, a pack of snarling wolves begin to surround you. Your dog is found later sitting in your car with the radio on.

10. It's late afternoon and you're in the garage working on your '76 Chevy Nova. The car needs new brakes and an oil change. You jack up the car and slide underneath to begin the oil change. Before you can get to the oil pan, you see that the brake line is leaking fluid because something has chewed through it. Maybe you don't need new brakes after all. Maybe all you need is a new brake line and more brake fluid. While still underneath the car, you notice that your Great Dane has decided to lie down next to the car jack and is pushing it with his paw. You tell him to stop doing that, but it's too late. The jack slips and the car comes crashing down.