Why Jerry Sandusky is Definitely Going to Jail

Shame on you, Michael Jackson, for fucking up the boys club!

Unless you're the type of person who doesn't read newspapers or watch television or have access to a computer or talk to other human beings, you've heard that Jerry Sandusky, the assistant coach of the Penn State football team, was arrested for child molestation. This is, more or less, understood to be just about the worst possible crime a person could commit. Even in prisons, amongst rapists and murderers, child molesters are especially despised and often get…well, raped and murdered. And Jerry Sandusky apparently did it. A lot.

To get away with an act this heinous you have to not only be known by at least 80% of the world's populace, but they have to love you to the point that it becomes unhealthy. He has, of course, denied the claims and is going to court for what will be a very publicized trial. He has the right to be judged by a jury of his peers and is, technically, innocent until proven guilty, but it's not looking good for ole' Jerry. When he is likely found guilty, though, it won't be the fault of his legal team, who I'm sure will be working very hard to prove his innocence. There is one man who has made it so that Jerry Sandusky is all but guaranteed to go to jail. That man is Michael Jackson.

"But how could international musical superstar Michael Jackson possibly have any effect on the fate of a creepy old football coach from Pennsylvania?" you ask. Because Michael Jackson set the "public's tolerance for touching little boys" bar impossibly high.

"FINALLY, another man pushing MY head down… ahhhh…. SAVOR IT, JERRY, SAVOR IT!"

I know I'm going to anger a lot of people with this viewpoint. I learned exactly how much people hate hearing about Michael Jackson's sticky hands when it came to prepubescent genitals about two years ago when I wrote an article called "Five Premature Celebrity Obituaries," in which I wrote one sentence alluding to him touching little boy penises and the comments section became a collection of angry rants and death threats that actually became more amusing than the article itself. But this is a stone cold truth and I'm about to drop a knowledge bomb on your ass.

Since the beginning of civilization and hero-worship it has been understood that famous people can get away with things that would bring down the full wrath of the legal system on the rest of us. If you're famous, a speeding ticket can be swept under the rug. So can a dead hooker. Then that rug is weighted down and thrown into the Hudson River. But there have always been lines that can't be crossed. If you use the "N word" you're done. If you take steroids you will be brought before congress and shot. And if you rob a child of his innocence you will be dragged through the streets, stripped of everything you held dear, sent to the deepest, darkest, rapiest prison that can be found, and despised for all time. But Michael Jackson showed that if you were once the biggest star in the world, hey, we'll let it slide. And therein lies Sandusky's problem: He is nowhere near famous enough for America to tolerate his shit. 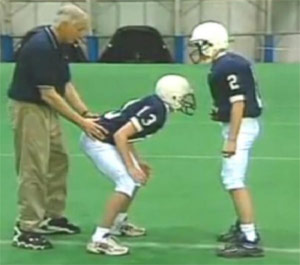 Jerry's favorite defensive move was always the cock-block. Like most Americans who didn't play college football, I neither knew nor cared who Jerry Sandusky was until I heard this story. To get away with an act this heinous you have to not only be known by at least 80% of the world's populace, but they have to love you to the point that it becomes unhealthy. There won't be thousands of loyal fans keeping the faith outside the courthouse while Sandusky's shame is exposed in detail for all to hear. And I guarantee there is no one out there with a Jerry Sandusky tattoo. Even among Penn State students he has no sympathy. In the place where he is most famous, no one came out in support of him. All of their disappointingly misplaced support went to Joe Paterno, who, if you ask me, is lucky he ONLY got fired.

Joe Paterno is a perfect demonstration of "The Michael Jackson Rule of Child Molestation Tolerance." Despite what inebriated Penn State students say, JoePa fucked up. To knowingly let something like this happen is only slightly less reprehensible than actually doing it, so he should be in a lot of trouble. But he's more famous than Sandusky. He's definitely not as famous and loved as MJ, but he is famous and loved enough for some drunken college idiots to start a riot. Since people care at least that much about him, he's being punished slightly less than his assistant coach. If the majority of Americans were angry enough at his being fired to drink a case of Keystone Light and flip over a couple cars, he'd still be on the sidelines. But, alas, Jerry Sandusky doesn't garner that kind of love so he's probably going away for a long time.

There are only a few celebrities out there that I believe are famous and eccentric enough for people to be willing to look the other way when they push the limits of our sense of human decency. In conclusion, I present that list of people I think could possibly get away with molesting a child, because they're THAT popular:

More Like This
Love It or Hate It, PIC Has a New Logo You’re Going to Like
Court Sullivan
Dear God, I’m Not Going to Kiss Your Ass in this Letter
TK Field
I’m Finally Going to Get My Shit Together and Back Up My iPhone
Angelica Lai
Resources

An easy way to beat a lie detector is with a baseball bat.