Trojan Fire & Ice Condoms: WTF is Happening to My Dick?!

I've been seeing the commercials for these new Trojan Fire & Ice Condoms. In the commercial two people walk into the store, their hair blown back from the supposed force of all the orgasms they've had (or possibly stuck in that position because of all the flying bodily fluids that got caught in their hair during this apparently epic fuck session), and ask what kind of condoms they had just bought and used.

First off, that's just irresponsible consumerism. You need to know what you're buying, especially when the consequence of ignorance is AIDS, a baby, and/or an AIDS baby. How many times have you been in a rush, run to the store, grabbed the first box you saw in the condom aisle, then arrived home only to discover you've bought a box of party balloons…and in your horny desperation tried to use them as condoms? No? Just me? Fine, be that way. The point is, balloons make terrible condoms and if I'd just taken a few seconds to read the box, neither Carrie-Anne nor I would have had to go to the hospital for first degree friction burns on our genitals. 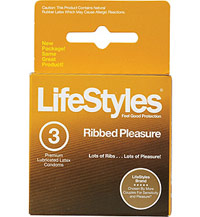 Normally, though, I'm very particular about my condom choice. Having tried many different brands and types of baby-juice catchers, I've narrowed down my selection to the ones that best suit me given the particular situation. If I have the time, money, and forethought to stock up beforehand, I'll usually go for LifeStyles Ribbed. They have a snug-but-not-tight fit and an acceptable amount of lubrication. I also like to put them on inside out so that I get all the extra ribbed sensation. Trust me, guys, give it a try. It's a whole new experience. 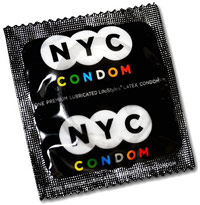 In a pinch, the NYC Condoms work quite well. For those of you who don't live in New York City, many bars here have bowls of free condoms provided by the city just sitting around waiting to be taken and used. Whenever I'm low on cash and I happen upon one of these bowls sitting on a bar like unsavory Halloween candy, I grab handfuls of them, take them home and store them up like a squirrel hoarding nuts for the winter. 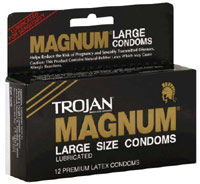 Every once in a while I'll buy a box of Magnum condoms. I don't really need Magnums but if there's a cute girl at the register I'll grab a box, put it down on the counter, wink at her, and, usually, get escorted out by security. You can't blame a guy for trying.

But these Fire & Ice condoms are a completely different beast. They advertise that they create a warming sensation that turns into a tingling sensation which enhances the sexual pleasure. I'm sure it does create a new and exciting sensation for you and your partner… if you're expecting it. But if you're using one of these chemically-enhanced condoms without knowing it, like I was, it can be one of the most horrifying experiences of your life.

What if this girl had some sort of extremely fast-acting STD that condoms are powerless to protect against?Let me set the scene for you. I was back in my hometown visiting my family for a couple of days and I ran into a girl I'd lusted after and masturbated to many times in high school. We decided to meet at a bar later that evening to catch up. In the years since high school I'd lost a lot of weight and learned how to talk to women without sweating like a runaway slave, so she was actually into me. After 5 or 6 tequila shots she was inviting me back to her place. Once again, Jose Cuervo proves himself the ultimate wingman.

We got back to her apartment and started going at it. The rumors in high school were true: she really could suck the sap out of a maple tree. She asked me if I had any condoms. Sadly, I didn't. Since I had planned to spend the week with my mom and my aunts, the thought of any sexual encounter hadn't even entered my mind. (Actually, there was one dream that will haunt me ‘til the day I die.) So she went rummaging through her drawers and found one. I tore it open, slapped it on, and got down to the business at hand.

At first it was all good. Then suddenly things got a little warmer down there. I disregarded it because, well, I was fucking. I was distracted. Then it got a lot warmer. I thought that the condom had broken. I started to remember the other rumors about this girl in high school and my mind flashed back to the Costco sized bottle of penicillin that a guy I knew had to buy after he'd slept with her junior year. I remembered being at the urinal next to him in the bathroom and seeing him fall to the ground curled up in a ball, weeping with unimaginable pain as he tried to take a leak and Chlamydia burned out of his dick like sulfuric acid.

I screamed and fell off the bed. Panic stricken, I looked from her puzzled face to my crotch and saw that I was still fully sheathed. I told her that I got a cramp in my leg and apologized for the abrupt dismount. Hopping back onto the bed we resumed our sexual congress.

Then the tingling began.

Initially it just seemed like a shudder of pleasure, so I went with it. Then it started to get more pronounced. I was losing focus on my thrusting and concentrating on this strange sensation engulfing my junk. The tingling sensation became a prickling sensation and then, mixed with the heat, a stinging sensation. My mind suddenly started racing with thoughts:

Has BenGay had marketed a brand of condom I don't know about? Wait, what if this girl had some sort of extremely fast-acting STD that condoms are powerless to protect against? Fuck, this "Super STD" could be the next Ebola and here I am fucking the carrier monkey!

As all this was going though my mind I didn't realize that we had been sliding on the bed, and I was now accidentally banging her head against the wall. The sounds that I had taken for moans of pleasure were actually her trying to tell me to slow down as she was slowly losing consciousness. I stopped and looked down at her. For the longest moment of my life she didn't move and I thought I'd killed her. Then she stirred. She turned her head, looked up at me with glassy eyes and said, "Wow, that was great. I think I have to go home now." I reminded her that she was home and told her that I should be going. She said that was probably a good idea because she suddenly had the worst headache she'd ever had. 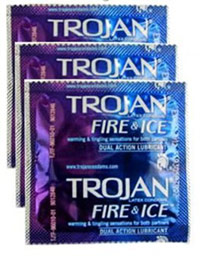 I got dressed so fast I might have set some sort of land speed record. As I was making my way to the door I saw the condom wrapper on the floor. I picked it up and saw that it was a Trojan Fire & Ice. Then it all made sense. I started to laugh. I turned back to the girl to tell her what I thought was so funny just as she leaned over the bed and vomited on her floor. I took that as my cue and went home.

It turns out she had a concussion.

The good news is I got tested the next week and certified STD-free! A few weeks later I picked up a box of Fire & Ice condoms and used them again. This time, knowing what to expect, I enjoyed them a lot. So, besides the panic attack and the potentially life threatening injury, Trojan Fire & Ice Condoms get the Marcus Terry Seal of Approval®.