As obesity becomes more of an epidemic in America, people are trying harder and harder to lose weight and get in shape. There have been hundreds of fad diets over the last few years. None of them work. And some of them are just plain stupid.

The Atkins Diet was popular for a while. The basic premise was that you don't eat carbs. That sounds like a good idea at first. Then you realize that you need carbohydrates to live, asshole. There's a reason that grains are the biggest tier of the food pyramid.

And then you have the cleansing diets. With these you are only supposed to eat one kind of food for a few weeks to cleanse your system and make it easier for you to lose weight. There's an apple cleansing, a cayenne pepper smoothie cleansing, even a multigrain bread cleansing (go fuck yourself, Atkins!). You might lose some weight doing one of these cleanses, but it's not because your system is clean. It's because these plans make you shit… a lot… and in different colors. I bet you didn't know that cayenne pepper turns your poop purple. Well, if it's the only thing you eat for two weeks, you'll be dripping chunky grape Kool-Aid all day every day.

After a few weeks, once the delirium sets in, you won't even notice that empty feeling in your gut.The only popular weight loss program that actually works is Weight Watchers. Since 1963, millions of people have lost weight on this program. It's a tried and true method. But, it's so much work. You have to pay for the food and count calories and go to meetings. The Weight Watchers meetings are like AA for fat people. You go in, stand up, say, "Hi, I'm Mike and I'm a fat ass." Everyone hugs, cries, eats a carrot, and goes home feeling empowered. Sure it works, but who has the time and money for all that effort?

In this busy, fast-paced world most of us don't have the time to go to the gym. We don't have the money to join a weight loss program or buy specialty foods. It's just so hard to live healthily. But there is a diet plan out there that is guaranteed to work and is the very definition of easy and cheap. It's the Poverty Diet!

With the Poverty Diet you can lose weight in one simple step.

The rest takes care of itself!

A penny for your thoughts, which will no doubt revolve around food initially.As any homeless person or recent college graduate with a degree in liberal arts can tell you, money is very hard to come by. Well, that's the beauty of the Poverty Diet. When you don't have any money you can't afford to buy fatty junk food, or any food at all for that matter!

Sure, you get very hungry, and those hunger pains can be distracting in your everyday life. But after a few weeks, once the delirium sets in, you won't even notice that empty feeling in your gut. Every time your stomach growls you might imagine it's a panther or some other jungle cat stalking in the trees and you'll run off to try to track it down, completely forgetting that you haven't eaten today. Of course, you won't find any jungle cats prowling in the shadows because if you did find one, kill it with your bare hands in a fit of starvation-induced mania, and devour its tender flesh, it would defeat the whole "not eating" diet plan.

Don't worry. You won't be bothered by the hunger for long. In time your body gets used to malnourishment and the hallucinations begin to fade. Once your stomach shrinks and you require less food to feel full and your body needs less food to function, you'll barely even have the desire to eat. When you wake up in the morning and brush your teeth you'll be satisfied just by that minty taste in your mouth and food will be the last thing on your mind. Before you know it 4:30pm rolls around and it's time for brunch!

Of course, the best way to lose weight is to mix diet and exercise. But who has the energy for all that running and weightlifting? What are you, a gymnast? No, you're a former sociology major with no marketable skills. Well, with the Poverty Diet you have a built-in workout. Did you know that it takes 3 muscles to smile and 27 muscles to frown? Once you lose all your worldly possessions you'll be doing a full face workout 16 hours a day and frowning your way to a chiseled jaw line. 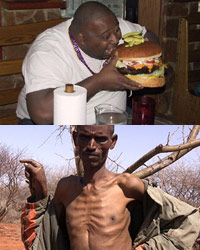 "I used to eat the new version of me for breakfast!" -Big ToneOne of the Poverty Diet's most outspoken success stories is Anthony Terell. A 350-pound computer consultant from Phoenix, AZ, Anthony, or "Big Tone" as his friends called him, spent most of his time in a call center answering calls for consumer tech support. But when his job was outsourced to India he decided it might be a good time to make some changes and try to lead a healthier life. He decided to go on the Poverty Diet when his house was seized by the bank. After only 8 months of sticking strictly to the Poverty Diet plan while living in his car, Anthony lost over 250 pounds!

This can be your story too. And, with the way the economy is going, it probably will be! It's not called "The Involuntary Diet" for nothing. And with so many people converting to the Poverty Diet plan, word is spreading across the globe. So we're asking for you, our loyal dieters, to send us your before and after pictures. The top 100 people that show the greatest change from following the Poverty Diet will receive a loaf of bread. That's enough food to last you almost a month! We look forward to your submissions.

Related
You Gotta Dance like Nobody’s Watching from the Narrow Slits of the Closet Door
Troy Doetch
The Public Pool Is Closed Due to COVID-19 (And All the Other Nasty Shit We Found in Here)
Joe Wellman
You Can Do Anything You Want in Life, As Long as You Get Past the Crushing Weight of Reality
Jennifer Shim
Resources