"I want to get some goddamn sausage on the fucking pizza!"

If only it were that simple.

Studies have shown that deciding on the toppings is the most stressful part of the "pizza experience." Why someone felt it was necessary to conduct such a study is beyond me, but it has been recorded that friendships, relationships, and even marriages have been taxed to the point of breaking just from trying to order a pizza. The problem isn't that everyone wants something different—pizza tastes almost the same with most toppings so, in general, people are willing to compromise—it's that one person ruins it for everyone… the fucking vegetarian. The vegetarian won't let you get meat on the pizza.

There are 6 billion people in the world and 8 billion chickens. If they ever got organized, we as a species would be fucked.This is just one example of how the vegetarian menace is dividing this great country of ours. They aren't necessarily bad people, they just have stupid, stupid beliefs. But a lot of folks have idiotic ideals. The problem is that vegetarians try to push their beliefs on everyone else. They don't understand that you don't get between a man and his meat. Even the great peacemaker Dr. Martin Luther King, Jr. once said, "Bitch, if you try to touch my steak again I'll cut you."

A vegetarian would I wouldn't have a problem with the veg-heads if it weren't for their pompous attitudes toward us carnivores. It's the judgmental looks and the snide comments they give when they see us devouring a full rack of ribs. They say things like, "That's disgusting. Do you know what they do the cows in those processing factories?" No, I don't know, and I don't care. Whatever they're doing is finger-licking good and I hope they keep it up.

Some say being vegetarian is a healthier lifestyle. Sure vegetarians may often be thinner and weigh less than meat eaters, but that's because of the osteoporosis brought on by their severe iron deficiencies. Their bones are as light and brittle as a pigeon's. If they were to sprout dirty feathers and tails they'd be able to fly like their urban avian brothers. And they'd be just as easy to swat out of the air with a tennis racquet.

Others say it's just cruel to kill animals. I say we've got to get them before they get us. There are six billion people in the world and there are over eight billion chickens. If they ever got organized, we as a species would be fucked. It would be a feathered holocaust. Everywhere you look there'd be corpses pecked to death with egg shells strewn about them.

But I admit that our war on animals has not always been for survival. It has often been for fashion. And of course vegetarians have a problem with this. Listen, hippie, fur isn't murder. A "people suit" made from the supple skin of nubile young coeds is murder (mental note: and a good idea for a new project). Fur is warm and stylish and was once a very lucrative business for many a grizzled mountain trapper. 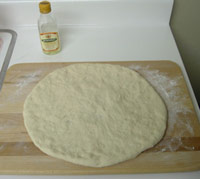 A vegan would have you believe this pizza is ready to eat!Vegetarians just have an overly humanitarian viewpoint. While I disagree with their lifestyle, I can respect their beliefs. But there's no excuse for being vegan. Vegans are the worst. Forget about not getting meat on the pizza, you can't have the cheese because it came from an animal. You can't have the tomato sauce because animal poop was used as fertilizer. You can't have the crust because a sheep once farted in the field where the grain was grown. But you can have this blob of tasteless gray matter called tofu. It goes great with beer and nachos at your Super Bowl party.

If you don't want to eat meat, fine. But why shun all animal related products? Vegans don't eat eggs even though they're not really meat. They say that you shouldn't eat this delicious breakfast staple because "eggs are chicken embryos and you wouldn't eat a human fetus, would you?" Of course not. I also wouldn't cut off a guy's leg, deep fry it to golden perfection and chow down on it while rubbing the grease all over my chest like a Masai warrior. But I have nibbled on a few breasts in my time. ZING!!

They don't drink milk because it comes from a cow. Do you know what will happen to your precious cow if it isn't milked? Its udder explodes. And I know what you're thinking. You think the milk will explode out and rain down like a beautiful white summer shower, followed by a majestic milk rainbow that you and the cow will frolic under for all the days hereafter. Well, wake up, hippie! It isn't cool, fresh milk that comes out when the udder pops. It's a rancid, bloody, curdled puss. And when an udder blows, it blows big. So hopefully you're the one standing there in that moment when it pops like a giant pimple, you vegan asshole.

So I guess the point of this whole rant was just to say let's try to get along, people. Don't let our dietary differences drive a wedge between us. We don't have to be on opposing sides brandishing turkey legs and celery stalks at each other. All you have to do is let us get some goddamn sausage on the mother fucking pizza.

Related
Mosquitoes Review Me
Ian Bardenstein
This Pride Month, TD Bank Is PROUD to Say: You Owe Us Money
Lily Blumkin
The Parking Garage Is Compromised, So How About We Trade Federal Secrets at La Romantica?
Nathan Cowley
Resources