Four short Thanksgiving comedy pieces from PIC staff writers Sarah Romeo (“My Greatest Thanksgiving was Back in ‘97”), Court Sullivan (“On Pilgrims and Turkeys”), David Nelson (“An American Thanksgiving in Canada”), and Allen Waters (“The Spirit of Giving by Taking”). Feast and enjoy!

My Greatest Thanksgiving was Back in ‘97
By Sarah Romeo

I was a hot-blooded 9-year-old with a heart of gold and a frail 70-pound body, a mere shadow of the corpulent sea lion I would one day become. My small frame did not dissuade me from gorging upon the exuberant feast that lay before me, and I ate enough food to put Chris Farley in a turkey-induced diabetic coma.

Yet, it was a Boston Cream Pie, trembling on the countertop, that lead to my true demise. In secret, I pulled this pie into a corner and shoveled slices into my mouth with bare, grubby fists the way a starving Ethiopian child might voraciously swallow a maggot-encrusted swatch of animal flesh, and then lick his fingers clean of the sweet, stale blood platelets. It was delicious.

Afterward I basked on my aunt's corduroy couch and chortled in delight at the flavors stewing inside me, but this joy quickly turned sour as the half-digested food started a party in my belly—and not the good kind. I disregarded my paining stomach, and played with my cousin's new chemistry set, fantasizing of how I might possibly convert it into a meth lab. Despite my ignorance, the pain grew worse, until suddenly, my Thanksgiving dinner, pie and all, surged up my throat and into my mouth.

Cheeks full of bile and turkey goo, I knew not what I should do next. I could blow chunks all over my aunt's living room carpet, but everyone knows, puking on the floor is for quitters. Calmly, I stood up from the crowded sofa and knocked on the bathroom door. “Just a minute,” I heard my mother call from inside. Sorry Peg, I thought to myself, Vomit knows no time limits.

So with that, I flung open the door. My mom sat on the toilet in horror as the aboriginal food monster that had developed in my tummy leapt forth from my throat and splattered the mirror and everything around it. Cranberries and yams, mashed potatoes and that damned cream pie decorated the bathroom vanity, and I smiled to myself.

Because we all know, it's not a holiday unless it ends with someone projectile vomiting into the sink. That's what makes Thanksgiving great for me: we are an honest people, it is an historical event, and I am an hungry, hungry girl. Have an happy holiday, everyone.

On Pilgrims and Turkeys
By Court Sullivan

Sweet potato casserole with marshmallow topping aside, Thanksgiving only means two things to me: Pilgrims and turkeys. I will now share most of the information I have on each (Wikipedia not included).

“Hauling turkeys since 1620.” Pilgrims: The Pilgrims came over from England in search of lots of turkey. They couldn't get enough of it apparently. Unfortunately, the British restricted them to just a leg and a thigh per person per week. In America, however, the Pilgrims found more turkey than they could handle, which pleased them greatly. But they were always afraid of having their favorite food taken away from them again, and this is why modern day Pilgrims can be seen driving giant green and yellow Mayflower tractor trailer rigs on the highway: no Pilgrim ever travels with fewer than 75 turkeys on his person. Rumor is, 25% of each Pilgrim's turkey army is trained to fight the Red Coats; the rest will jump in an oven at a moment's notice.

Turkeys: I've never really grasped the concept of a turkey. Is every turkey in America owned by a food processing corporation? Because they only wild turkey I know of comes in a bottle and soothes the soul. Where do wild turkeys live and what do they eat? Wouldn't it be weird if their diet consisted only of stuffing and mashed potatoes? Why does every turkey I see look like a really ugly bald dude who just shaved his entire beard off? Attention turkeys: If you would just wear a Pilgrim hat to cover up your baldness (like all those fun pictures we use of you in elementary school), I think people would stop chopping your heads off at such an alarming rate. And maybe a little aftershave for that ugly neck—a little hygiene goes a long way with humans these days. Fun fact: in the United States, turkeys have become so abundant that they have evolved to be born with natural coatings of gravy and cranberry sauce as a form of population control.

An American Thanksgiving in Canada
By David Nelson

I'm Canadian, which means I'll have to be retroactively thankful for anything good that came up this year. Actually, maybe our Thanksgiving traditions don't require gratitude. For all you know, we group ourselves according to blood type, wear novelty hats and do something called “The Manitoba Gerbil-Dance.” 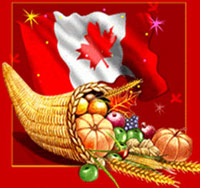 But, like a James Bond villain in the next-to-last act, I've actually outsmarted you because my family is celebrating American thanksgiving! Ha, never saw that coming, did you? That's like a non-Mexican celebrating Cinco de Mayo, or a yes-Mexican owning a tuxedo. It's unlikely, but statistically possible.

Why are we celebrating American Thanksgiving? Simply put, it's good public relations for the family. We want to show our support after America elected Black Vulcan over Mumm-Ra. I pump enough money into the American economy just by traveling to Buffalo in order to buy breakfast cereal. Cookie Crisp, for example. I fucking love Cookie Crisp, but you can't get it in Canada. We drafted Anti-Cookie-Crook legislation in the early 90's. I'm thankful I get to enjoy those sweet morsels that turn my milk all chocolately.

Also: something about Indians. That's part of Thanksgiving too, I understand.

The Spirit of Giving (By Taking)
By Allen Waters

In the spirit of giving, my friends and I have decided to attempt an altruistic feat of biblical proportions. This Thanksgiving, we will do our best to give:

This isn't the time of year to be selfish, so get out there and spread the wealth! I'd also like to invite Mr. DeGraaf to spread the holiday joys of Chlamydia and expert investment advice, as well as, if he's feeling up to it, shoot some guy with a BB gun and ruin his marriage.

Because, as the great Chuck Palahniuk once wrote: “It is only when we've lost everything, contracted an STD and alienated friends and family, that we are free to do anything.”