So You're About to See Someone Get Stabbed

Three ways to avoid your next public transportation nightmare.

Recently I bought some fries and was waiting for a train to finally take me home after one particularly uneventful day (and by "uneventful" I mean only two people almost hit me with their gratuitously expensive cars), and while dozing off to obscure rap music I heard something a little unusual: a homeless man arguing with a group of twentysomethings who were obviously on drunk with power. After a while these young party-goers started walking to the other side of terminal, but the homeless man, clearly still irked by the encounter, started mumbling, "I'll fucking murder you." Eventually he began following them, holding a knife that seemed to appear out of thin air.

Really, it was either witness a murder, or almost get abducted and turned into a sex slave. Luckily nobody got hurt, except for a few egos.

Needless to say, I handled this situation like an idiot, BUT YOU DON'T HAVE TO! In the unlikely but plausible event that you're about to witness a possible murder go down like Chinatown, here are three important things to remember.

This may seem like a very simple thing to do, but guess what? It isn't. With rappers like Lil Wayne, Wiz Khalifa, Iggy Azalea, Jay-Z, Kanye West, and even 2013 Miley Cyrus (to some very very VERY far extent) being all popular and entertaining the masses simply by existing, how could you not listen to rap music? However, if you're about to see somebody get killed, this may not be the best option. Sure, that hot new Drake track might be "dope," but there's also a chance that it's making you more violent. A study conducted on 522 teenage black girls found that girls who watched "gangsta videos" for 14 hours or more per week were more prone to violent, destructive behaviors such as hitting teachers, using drugs, or getting arrested. And in an attempt to not sound like a racist ass-bag, I will not be putting a joke here. 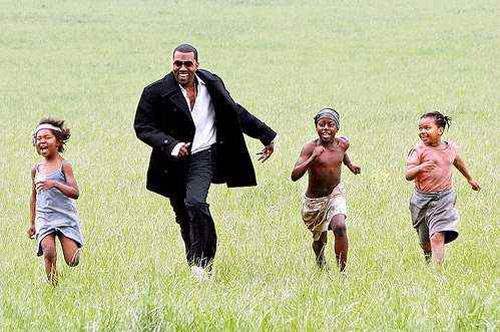 Here's a happy picture of Kanye west running through a field instead.

So if you're already about to see somebody get murdered right in front of you, arming your eardrums with music that makes you even more violent and mischievous is only going to put you at an even higher risk than the unfortunate one at hand. It's one thing when a guy pulls out a knife in a fight, it's another thing when a person not even involved in the whole altercation shows up ready to destroy anything and everything in front of them—that's just plain not attractive.

With everything going on in the world today, I admit that at times it is hard to stay awake. It's just like, why go to sleep when you could watch countless hours of (insert literally anything here) videos? When you sleep you don't do anything other than act like you've slipped into a coma for eight hours straight. Eight hours, I might add, that you could spend doing your taxes or figuring out why you haven't talked to your dad in six years…the last one might only apply to me but that's beside the point.

Although this way of thinking is wrong, it's clearly on the rise with more than a third of a third of adults in the U.S. not getting enough sleep. After surveying 75,000 people, the CDC found that 35% reported getting fewer than seven hours of sleep on an average night; of these people, those ages 18 to 24 and over 65 were the most likely to unintentionally fall asleep during the day (about 44% of these groups reported nodding off). And to put it nicely, when you fall asleep somewhere you never planned on, you turn yourself into the plot of almost every Nightmare on Elm Street movie. 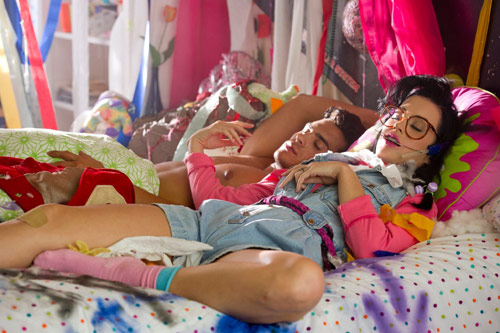 Specifically the one where Katy Perry pretends to be unattractive.

Now let's say that you have just fallen asleep in, oh I don't know, a subway terminal. You don't know what could possibly go down besides waking up and being perfectly fine, but hey, you're sadly mistaken. That's because ANYTHING COULD HAPPEN! A giant lizard could rise from the Earth and start eating people; a gang of aliens could teleport to your location and start eating people; the cast of a Tyler Perry show could appear after having a fun HR-required outing and start eating people; a homeless man could stab you. And you wouldn't even know it because instead of catching a few Z's at night when you were supposed to, you decided to nod off in the train station where shit gets cray.

3. Stay away from groups of young twentysomethings.

Being born in 1995 has granted me many luxuries: I didn't really have to deal with the Y2K buzz because I didn't know what was going on; I have a good grasp on technology and how to use it; and generally speaking, compared to the young people of previous generations, I have greater access to knowledge and can be less idiotic because of it. Then again, this doesn't seem to be the case. Just consider the fact that it seems like people in their 20's haven't really been trying to put on their big kid pants. It also doesn't help that people in my generation have also had the unfortunate luck of growing up with #YOLO, spurred by former Degrassi star turned rapper Aubrey "Drake" Graham "Crackers." Admittedly, it is really fun to just say YOLO and throw all cares to the wind, so I can see why it's so popular. But when you take into account that young people (already about as reckless as monkeys with human faces) have found it popular to attach "YOLO" to their idiotic acts, making about 408,000 "texting while driving" tweets with #YOLO attached to them knowing that a young aspiring rapper did the same thing and died an hour later, I think we should all be a little more concerned. 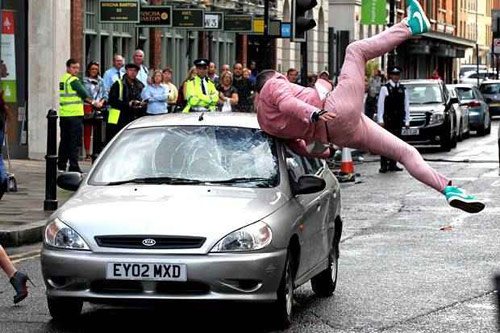 This guy's tweet read: "about to prove to everyone that I'm superman."

Now although I don't like to judge books by their covers, when I first saw these youngins who were pretty much drunk and disorderly on the train, I should've known that nothing good could have really come out of them sitting next to a guy who clearly wasn't exactly "killing it" at living. So instead of sticking around, I kind of just moved away from it all. I felt like I made a good decision by trying not to watch what was almost guaranteed to go down, but once I saw that all the action was moving the same way I was, I really had no choice but to sit down, watch, and post this tweet: 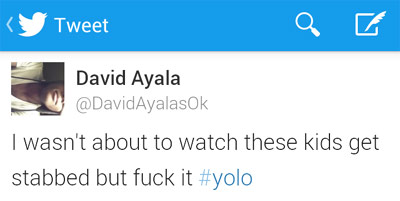 Danger is all around us nowadays, so it was inevitable that I would encounter a volatile situation at some point after living in a giant city for a while. Really, it was either witness a murder, or almost get abducted and turned into a sex slave, the latter of which, surprisingly, hasn't happened yet (what with me being all vulnerable and shit). The only thing I would suggest to anyone living in a high crime area is to make like a child/oppressed woman in 20th century and be seen but not heard…or, just stop putting yourself into horrible situations. Hmmmm, yeah! That last one seems like the best thing to do.