Facing the embarrassment of being British in America.

I stepped off the plane, grinning ear to ear, and a volcanic backdraft struck me head-on. I reeled back and had to steady myself against the passenger behind me, apologizing profusely in true British style. I don't do well in the heat—I don't know whether I have an abnormally high blood temperature or whatever, but it always feels to me about ten degrees warmer than the thermometer insists. This was worth gritting my teeth and putting up with, though—after sixteen years of waiting, I was finally setting foot on US soil. I had the next two weeks to discover my own little slice of the American Dream, and I was going to make the most of every minute.

My star-spangled reverie was rudely shattered at that moment by a thunderous belch from behind. My father began his descent from the plane, following me down the narrow steps and waving away his garlic-infused fumes with a magazine. A couple of passengers down the line, I saw an elegantly-dressed lady turn around to look upon my family with great affront. She shook her head, and in an accent I had only ever heard on television shows set in the Deep South, murmured, "Disgraceful." Behind me, Dad scratched his cheek (let's just pretend I'm talking about his face here) and gave the magazine a final waft. "Chicken was a bit festive, eh?"

I managed to convince my folks that we should sample a real American staple—and so that evening, I found myself ensconced in a booth at Red Lobster. I wanted to die.

Generally speaking, portrayal of the Great British public in American media has improved lately. With the exception of shows like The Simpsons and Family Guy—whose hands are tied by the simple fact that stereotypes are funny—we're no longer represented as tea-loving, crumpet-munching sissies with awful teeth. Like Virginia Slims, we've come a long way. So when I see one of my countrymen—let alone my own family—letting the side down, it makes me want to club them over the head with the nearest solid object.

Fortunately for dad, the nice lady behind me wouldn't let go of her umbrella, so his head went unclubbed as the group shuffled toward the terminal. But as we walked, I examined the herd of Europeans surrounding us: over there, a bloke wearing a West Ham shirt and a vacant expression, wrist-deep in his own nostril; up ahead, what I think might have been a teenager (it was difficult to be sure; he was the size of two teenagers stapled together, and his skin had all the clarity and luster of gravel) thickly bemoaning the state of American obesity between chunks of chocolate. Not exactly the envoys I would've chosen to accompany me in my first foray into the sweet land of liberty.

Don't get me wrong—these things do not make a bad person. Everyone picks their nose from time to time, and for all I knew, the kid with the face like stucco had been speaking ironically. But still, there's a time and a place. When you're hanging out in a country that's just started to change its mind after ten, twenty, thirty years of seeing you as charmless and vaguely pathetic, it seems counter-productive to demonstrate just how right they were.

I put this irritation out of my head and told myself it was just jet lag. Give it a day or so for our body clocks to synchronize with local time, to grow accustomed to the sweltering heat, and maybe then they'd demonstrate a little more decorum. It was a beautiful dream to have.

Two nights later, I got a real treat. I managed to convince my folks, my brothers, and my sister that we should sample a real American staple—and so that evening, I found myself ensconced in a booth at Red Lobster. It felt great to visit a place that I'd seen so much of, on television. It's weird, isn't it? Japanese tourists tour ancient monuments and sites of historical importance, taking 4,000 photos a minute. Apparently British tourists tour nationwide restaurant chains and places they've seen on TV. There's probably a lesson in there somewhere. 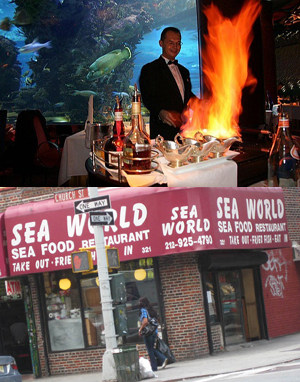 To be fair, there were better options, and there were worse options.I certainly learned a lesson when we got to the restaurant: my father is not safe for American consumption. From the moment the plate of baked snow crab was placed in front of him, it took him approximately three and a half seconds to pierce its shell with a pair of steak knives, lift it off the plate and parade it along the table like some warped marionette from the darkest depths of my nightmares.

Other diners were quick to notice his antics. I stole a glance around the room, hoping to spot at least one grinning face or appreciative gesture. No such luck. A sibilant whisper filled the restaurant as word spread. I only caught snippets of the various conversations—I was busy hissing at Dad to put the damned crab down—but I distinctly heard the words "crass," "inappropriate," and rather bizarrely, "tortoise." The head waiter materialized at Dad's elbow just as he started to add vocals to the crab's dance routine, and we were politely encouraged to exit the premises.

It's not just the inhabitants of far-off lands in front of whom we seem hell-bent on humiliating ourselves, either. When I was thirteen I found myself attending a wedding for two people who can only be described as upper class. I was less than impressed; caviar had turned out to be disgusting, three-piece suits were supremely uncomfortable, and none of the guests had heard of FIFA or Halo. I was all set to demand that my parents take me home when a group of snobbish young men across the room did something very stupid.

One of them grabbed a carving knife from the catering station, spread his hand flat on the table, and began playing a well-known game. You know, that one where you stab a sharp blade into the spaces between your fingers, as rapidly as you can. I've never really understood the appeal of this particular game—nor the rules—though based on what happened next, I gather that you're supposed to maintain possession of all your digits in order to win.

The gentleman in question lost his little game, anyway, and there came a blood-curdling screech as he severed his index finger, just above the top joint. For a moment, the only response to his anguish was tutting, eye rolling, and shakings of the head—but then a waiter stepped wearily forward, bearing aloft a clean cloth and a bucket of ice. We left soon after that, but for some time the memory remained with me.

Not of the severed finger—compared to modern cinema, that was fairly tame stuff. What haunted me was the abject idiocy that had caused the accident. I felt ashamed that the young man who could now only count as far as nine and a half would be grouped in with the rest of us British citizens, taking us all down in global estimation. I hoped the media didn't get hold of the story.

Maybe I'm just overreacting. Maybe I, and everyone else who shakes their head in disapproval when someone makes a fool of themselves, should get off our high horses and just let them get on with it. Maybe you're reading this thinking, damn, this guy has quite a stick up his ass.

Maybe you're right. But I think I have a pretty valid excuse.

Need I remind you that my father manages pole-dancing crabs at Red Lobster?