I am your asshole waiter. I admit it, I accept it, and you probably should too. It's not because you are a complete waste yourself; no, it is because you were just kind of a douche, but so were the ten friends of yours that you decided to come with, and when you and your friends from your awesome frat Cracker Dollar Rohypnol turn what was once a mediocre evening at an equally mediocre job into an experience similar to that of being the fetus with the coat hanger through its kidney, I may get a bit ornery. But in my defense, you brought it on yourself.

This is not your first foray into my establishment. Yes, mine. I've been here longer than you have, by about two years. The owner hates you, but he loves your money. I hate you, because the last four times you were here you complained about not having ketchup. In your inebriated state, you couldn't see the giant red bottle two and a half inches from your hand, its tip resting in the line of sight between you and the hideous girl you came with. Pick her up from the burn ward? With the fairly decent attention I paid to your needs last time, and incessant bitching I wouldn't take from the mothers of my illegitimate children, you still left me enough to keep my car at the meter for another forty minutes. I prepare myself for round two.

You, the gold medalist and captain of this Special Olympics team, decide that you want your burger medium rare, not medium.We'll start with your drinks. Walking in after pregaming with your only comfort (read: Natty Light) sets the expectations at around Marianas Trench level. Oh, eleven different cocktails that somehow all include the cheapest vodka we have? Sweet, I'm sure my bartender will be excited about that one. It'll take a few minutes, because you came in on Friday during the dinner rush. I doubt you're in a hurry. There'll still be freshman that don't know their tolerance whether you leave at eight or nine to return to your house that reminds most people of the Battle of Stalingrad. I ask for identification, because I really don't feel like getting fired from another bar, and half of you stare at me awkwardly. Left your wallet at home again? How were you going to pay? This one is on the guy with the awesome pink polo, I understand. I mentally note that this will all be on one check, and praise Beelzebub for this one little favor. I get the drinks for the four of you who are actually over 21, who also happen to be the only ones who bothered to shave this morning. That two o'clock shadow ain't fooling me, Scooter. One of you orders a diet water, and as the other ones laugh, I contemplate the vow I took to not urinate in the ice machine anymore. Refreshing Mr. Pibb for everyone.

Food time. Seems simple, if not for the fact that one of you is allergic to nuts, gluten, and dairy. No, I don't know what foods are safe for you to eat. Just try one, and I'll keep an epinephrine needle on standby in the hope I have the opportunity to jam it through your jugular. It'll be another 25 minutes, and I'm just going to bring things out as they show up. It's not like you all planned to say grace together, and unless you want cold food, you're going to have to deal. 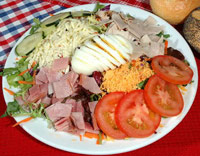 The only thing we DIDN'T put on this salad is the kitchen sink. This salad is so vegetarian un-friendly it ATTACKS PETA members. So, food starts coming out. Of course, the vegetarian "accidentally" orders the chef salad, the only salad with a cubic fuckton of deli meats. It only stated the contents on the menu, in clear blue letters. And you, the gold medalist and captain of this Special Olympics rugby team, decide that you want your burger medium rare, not medium. That'll be another eight minutes, since the cooks already have food on the grill. Your groan falls on deaf ears, and I take a small bit of joy at the misery your barren stomach gives you.

Time for the fourth round. You are drinking them faster than I expected, and as you try to slide it over to one of your underage companions, I call you out. You try to stammer some defense, and I laugh. You think it's me letting you get away with it, and then I move the drink back in front of you. Little Freddy's hopes of drinking underage at a bar have been sufficiently deuced on for now.

Finally, cash out time. I drop the single check on the table, and once again, your stuttering tells me there is a problem. Your friends pull out their wallets, and ask me to split the check. Eleven different ways. "You said you left your wallets at home, and he was getting the entire bill." Your failed attempt at a defense is inadequate. "We only split checks for parties of four or less. It says it on the menu, next to the ingredients in the chef salad." "Well, I can put it on several cards, but they will all have the same amount charged on them." The freshmen are getting stuck with part of your bar tab, and I'm okay with that. I didn't program our computer system, and I really don't care if it is a problem for you. We began our time together with a smile on my face, however forced, and goddamnit, I'm going to end your time here with one too.