The Next Generation of Curse Words

Are all those "fucks" going to be replaced with racist insults?

Our society is in desperate need of new curse words. Gone are the days when "fuck" was socially shocking, and my personal favorite curse phrase "god damn it" just doesn't seem to get the same rise out of people it once did. My generation has even started to use these words as sentence, as if they were the new "uh" or "um." 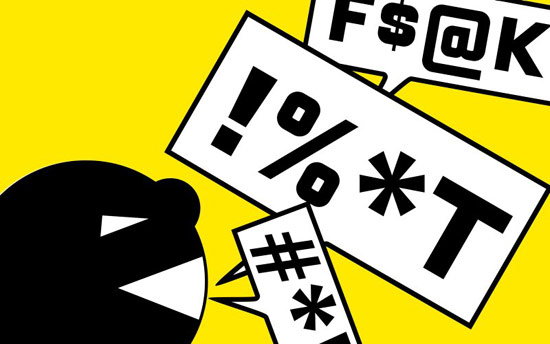 It goes beyond our culture using cuss words as filler in between thoughts. Recently I've begun to notice these words becoming fashion statements. Last year in a crowded airport, I saw a man in his late twenties wearing a t-shirt that said "FUCK HIPSTERS" in bold lettering across his chest. Not that I did not agree with his sentiments, but considering he publicly alienated the entire service industry with a single shirt, I thought it was a bold stance.

At our current cursing rate, I think the only bad words we'll have left as a society are racist ones. Also, "fuck" is a pretty easy word to read for children under ten. What am I supposed to tell the son I do not have when he inevitably asks me, "Daddy what does fuck mean"? I guess I'll be forced to respond, "Well Johnny, when a mommy and daddy love each other very much and they have found that their dreams are too ridiculous to pursue, they start to look for other ways to fulfill their lives. This is when the decision to have you comes into the picture…"

The cuss words we use are becoming too casual, which leads me to believe that in the future people will not consider them to be foul language. Eventually, Brian Williams will be leading off with, "Good evening, welcome to NBC Nightly News. I'm Brian Williams. Tonight, more fucked up shit coming out of the Middle East…"

The question I have is, how will future generations fill this cursing void we've created?

I have a theory that cussing will soon be exercised with culturally insensitive words. It's safe to say that the "fuck hipsters" guy at the airport would have gotten a different reaction from society if his t-shirt said "fag hipsters" instead of "fuck hipsters," and rightly so. We already have a new "f word" considering how uncomfortable people might be after reading that word in this piece.

Let me close with the following: I understand what a tricky subject this can be; that it only compounds the situation that I am a white, protestant, heterosexual male—basically the stereotypical demographic that uses hateful language; and that my cause is not helped with the historically racist accent I've been blessed with.

However, I am not condoning the use of culturally insensitive words as hate speech, or to put down certain sections of our society. At our current cursing rate, I think the only bad words we'll have left as a society are racist ones. Ultimately they will be used for cursing rather than belittling. For example, say I stub my toe. The traditional cursing would be something like "Oww, shit!" But I need more than to voice my pain and frustration by literally saying "feces." I need a word to let people know how bad it hurt. In the future, I will say something like "Oww, mother tap dancing Chinamen!!"

It's unclear how this will eventually manifest itself. But I'm obviously not the one who's going to start this cursing revolution. Maybe it will be Tiger Woods, who shanks a 3 iron into a lake and exclaims, "Tranny midget balls of retarded Satan!" The more "fuck," "damn," and "shit" are used in casual conversation, the less power they hold, and the more our culture will be forced to up its cursing game.