Slowing down fast food for the next generation.

"I'll give you my cheeseburger, when you pry it from my cold [due to poor circulation] dead [likely from a heart attack] hands!"

Difficult to imagine, but there was a time when artery-clogging, fat-storing foods were readily available for purchase. On any corner or thoroughfare, simply pull up, remain in your vehicle and order a complete meal with an insulin spike or excitotoxin-laced drink to wash it down. Sadly however, the days of fast food have come to an end, creating an unregulated, underground market, where criminals routinely carry out wars against a susceptible public. 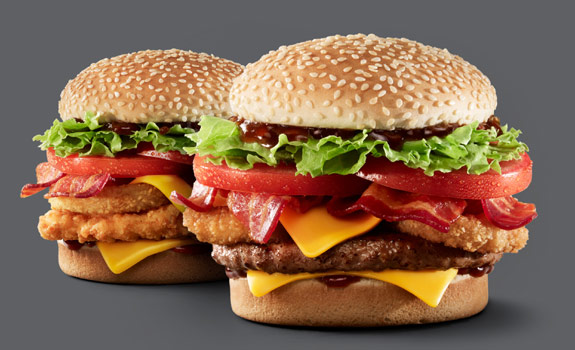 The debate was simple enough: more Americans were dying from obesity than guns, firing off a round of American ingenuity and problem solving. When faced with a dilemma, politicians agreed the simplest solution was to criminalize it. Early adopters felt a sense of vindication and hope for a healthy nation.

A grassroots movement slowly took shape, referred to by many as Big Mac ("Bewildered Independent Grownups Moderating American Cockamamie").Michael Bloomberg, a former mayor of New York City, set the foundation by proposing a ban on super-sized sodas. His dream was realized decades later, when Congress enacted a complete ban on all high-calorie foods and drinks. The bill was signed into law by the president, becoming the 28th Amendment to the Constitution.

Citizens, as usual, were completely divided on the issue. One side argued for prohibition, whereas the opposition quarreled: had the founding fathers not wanted us to have complete, unregulated access to fattening foods, they would have clearly said so in the Constitution. Despite moderates attempting to bring rational thought and levity to the discussion, the war raged on.

Implementing the ban was slow and methodical. Initially only foods containing bacon, battered or triple-fried, were removed. Shortly thereafter, burritos, sandwiches and a host of egg-containing products found themselves in the crosshairs. "I warned everyone, but no one listened," responded a man, face blurred, belly protruding through his still-too-small XXL t-shirt "Wait til they open up the FEMA camps."

When asked for an opinion, the US Surgeon general only supplied a warning: "Alcohol, tobacco and similar products are controlled, sold by licensed outlets with rules regarding their sale. I recommended similar standards for potentially dangerous products, asking for an ID, recording the purchase and advising regulatory bodies. If someone is buying deadly products in excess, we can proceed accordingly." He was ridiculed in hearings and largely ignored.

Not helping matters, the national mood was one of extreme divisiveness and vitriol. Attempting to push through any type of rational, reasonable law was out of the question. Ordinary citizens began throwing their weight around, consuming inordinate amounts of fatty foods as a means of protest.

Self-inflicted wounds were one thing, but when foods containing a stray fry were accidentally ingested, the situation was clearly out of hand. Law enforcement officials were dumbfounded. "First it was drive-thrus, now it's fry-bys," Captain Crunch of the Smithfield Police Department reflected in quiet contemplation.

A joint task force assigned to the problem, TFCK ("Task Force Conserving K-Calories"), came to a series of mind-bending, simple, rational conclusions. Implementing them proved impossible. For starters, the only 64-ounces of anything one should consume is water, and that's over an entire day, not in one sitting. Second, allowing lobbies to write laws for members of Congress intimidate and grade those who oppose it, tearing at the very fabric of democracy. Lastly, deflecting smears and vilification, TFCK dissolved, hoping subsequent administrations would find sufficient political capital to address the issue.

America continued on a path of self-destruction. Politicians were powerless, and moreover, gridlocked over a solution. A grassroots movement slowly took shape, referred to by many as Big Mac ("Bewildered Independent Grownups Moderating American Cockamamie"). They continued the recommendations of TFCK, adding more thoughtful provisions.

Students should be taught nutrition and a working knowledge of how food affects health. Restaurants are required to have calorie displays and reasonable serving sizes. Mental health facilities must be reopened and funded, offering treatment for eating disorders. Subsidies for corn, wheat and soy should be redirected to healthier options. As for the underground market, burger buybacks by local police, as well as placing officers within the community to create a dialogue with activists and concerned citizens curtailed illicit transaction, allowing purchases to be conducted openly once again.

"Eating an occasional value meal is fine, but super-sizing it simply puts you and others in danger," a Big Mac spokesman elaborated. "No one needs a hundred fries unless they're planning a mass assault [against their stomach]."

As in any negotiation, no one went away completely happy, however, both sides concluded they could live with the changes. Live they did, able to enjoy all food in moderation and accordance with health and safety standards.

Related
Incel Burger Has Heard Your Complaints and We’re Sorry
Ryan Ciecwisz
I Am the Wooden Board at That Gourmet Burger Restaurant, Here to Remind You That You Only Make $10 an Hour
Erin McLaughlin
Playful Cheeseburger Sliders, Motherly Advice, and a Sincere Apology
Noah Cohen-Greenberg
Resources