If There's an Airport God, He'll Seat the Hot Girl Next to You on the Plane

It's hard to tell whether she's 16 or 30, but it doesn't matter, the fantasy has commenced.

You hear the most beautiful tone in the world: the text tone. It reads: "Hey man what's up? What are you doing Thursday??" Although this text appears to be completely harmless at first glance, it is not. It is a disguised weapon of mass destruction and it is headed straight for your nerves: your friend is going to ask you to take him to or from the airport.

First, review your friendship to see if he has done any favors for you recently. If you are debt-free, lie your fucking face off and plan an excuse. Constructing a bulletproof response is harder than titling a pointless email at work. It seems easy to say, "Oh Thursday? I have work until six and then I'm going to dinner with my aunt and uncle." But there is a good chance that this jackass lands at some time that happens to fit perfectly with your schedule. Also, this asshole might know you don't have an aunt or uncle within 1000 miles. 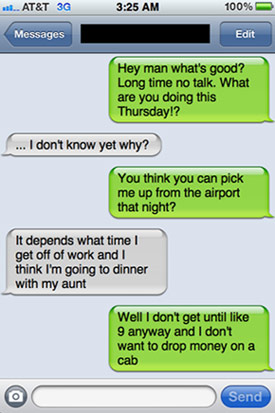 Still, you wonder if it's possible he's texting you for a different reason and has no intention of using you for an airport ride. Maybe he has something amazing planned for Thursday? Maybe he has Playoff tickets? Maybe he has a lucrative business opportunity and wants you to be his partner? If you are a glass-half-full guy, hedge your bet and craft a response that presents a previous engagement, but one that is breakable.

After you get through security you have about an hour to prove to the whole airport that you don't give a fuck about anything and that you are the sickest person there. Depending on the effectiveness of your excuse, you will receive one of two types of follow-up texts, "No worries man let's kick it when I get in," or, "Bro I really need you to get me I can't spend $30 on a cab and nobody else will pick me up." If you stand strong, he will offer to buy you In N' Out. But you can buy your own In N' Out. It's a five-dollar meal. You can literally drive to the In N' Out that's ten minutes from your place and eat it in your own car.

Bottom line: If you want someone to take you to the airport, send a text that says, "Can you take me to the airport Friday morning at ten?"

*Disclaimer: I would like to state that I am also guilty of asking my friends to take me to and from the airport in this exact fashion. Everyone is. It is inevitable. Also, there is one person reading this who thinks this post is solely based on my recent interactions with him. It is not. This is an analysis of a lifetime of airport requests.

Okay, now that we've addressed how to avoid unnecessary trips to the airport, let's get to your actual traveling experience at the airport.

I think I'm cooler than everyone I see in the airport. And so do you…hopefully. The second you step into the airport, you feel superior to everyone there. This is completely unjustified except for the fact that it always seems like you're going somewhere sicker than everyone else. You're usually on the tail end of a 3-day bender, or you're just a few hours away from starting one. It's also possible you're headed home for the holidays to detox and eat incredible food. When you think about it, everyone else in the airport is probably traveling to boring places for things that suck. For example, the guy in line in front of you is going to Pittsburgh. The lady behind you is going to Fort Lauderdale. Meanwhile, you're going to roll your face off in Vegas, New York, LA, or San Francisco for Outside Lands or something. 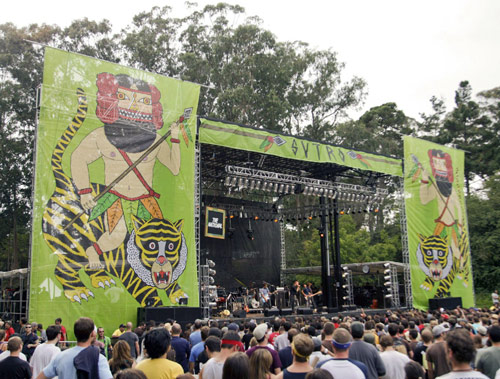 You text random people in the airport because you must be on your phone at all times or you might be found out. Found out for what? You don't really know.You get in line for security and briefly scan the crowd to see what kind of creatures you're going to be surrounded by for the next twenty minutes. It's incredible how the hotness level of the opposite sex increases exponentially in airports and on vacations. Ten feet ahead in line, you spot an incredible ass bending over to take off her shoes. From this angle she could be 16 or she could be 30. She turns around and you still have trouble deciphering her age. She's not even that hot, but you immediately begin fantasizing over the fact that this one girl, who is either 16 or 30, could be on your plane. And if all the planets were to align, she might actually be sitting right next to you. And she would be single. And she would be the coolest girl ever. And she might jerk you off under the tray table.

(By the way does anyone actually pull any ass on vacations? I never have. I'm usually with my family and don't really want to talk to other people when I'm with them.)

Here is a picture of the girl you might encounter at the airport. 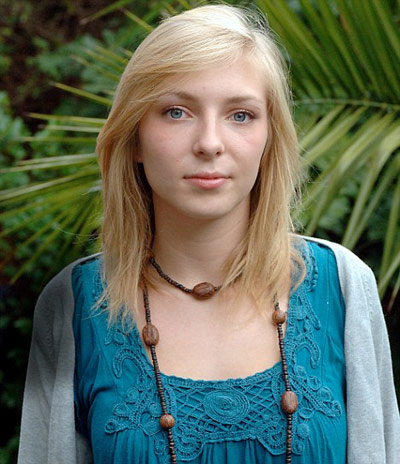 Not super hot, but obviously airport hot. She's also ambiguously-aged. Found it on Google after searching "18 year old girls" (which also delayed the writing of this post by about 12 minutes).

The Walk to the Gate

After you get through security you have about an hour to prove to the whole airport that you don't give a fuck about anything and that you are the sickest person there. If you go directly to your gate you're a loser. Go get some food. You go to CPK. You get the BBQ chicken pizza. But you don't like the BBQ chicken pizza that much because BBQ chicken pizza just doesn't quite taste right, does it. Everyone is always on BBQ chicken's dick and it's not even that good. You feel obligated to get it anyway. Regretfully, you shove the whole thing down your throat while making sure there is nobody around that you might recognize.

You approach your gate cautiously, making sure to sit in a chair that is not directly next to someone. You look around and see some disgusting humans. The guy to your right weighs 300 pounds and has a pulsating vein in his white legs. You look straight ahead and see some blonde hair flowing down the back of a seat at your same gate. Is this the same ambiguously-aged girl from security? Or is this a new candidate for your in-flight handjob? She gets up to order Starbucks and you briefly lock eyes. You immediately look down at your phone and act like you were reading something important. But really, you're listening to "Suga Suga" while texting your mom that the flight is on time. Everyone loves that song. Go ahead and play it if you want.

You've got about fifteen minutes before she returns. You text random people in the airport because you must be on your phone at all times or you might be found out. Found out for what? You don't really know, but you don't want your façade to be breached. People are starting to line up to board. Line up too early and you're a dumbass; line up too late and your seat gets jacked. Also, you don't want to be standing solo in line when your girl returns with her frappuccino.

You sit down at your window and wait. Is she coming? You half-look at the people boarding and half-look like you're too emotionally or physically drained to care. She walks in and says a gentle "hello" to the stewardess. She stands by your aisle, passes by, and that's it. You will never see her again. She wasn't that hot anyway.

The fat guy with the vein ends up sitting next to you. You throw on an essential mix and desperately try to fall asleep without cutting off the circulation in your arms.

Your plane lands, you get your bag, and then your friend picks you up. You close the door to his car and then head straight to In N' Out because you promised him you'd buy him a burger for picking you up. (See what I did there?)

Related
6 Tips as You Prepare to Die on Your Next American Train Ride
Matt Rotman
Quiz: Have You Met the Girl of Your Dreams on Tinder, or HPV’s Patient Zero?
Kit Lively
Planet Earth: No Vacancy
Steve Lewis
Resources