Guitar Shop Man Doesn't Want You to Buy a Guitar

Exposed at last: the loathsome conspiracy that is Guitar Shop Man.

When was the last time you went to buy a new car and came back convinced that not only do you not deserve one, but that you can't actually drive? Never, I'm guessing. Because dealerships don't tend to hire wannabe Schumachers to take you for a dozen circuits of the carpark to demonstrate the how well the suspension and braking systems works at 120mph. 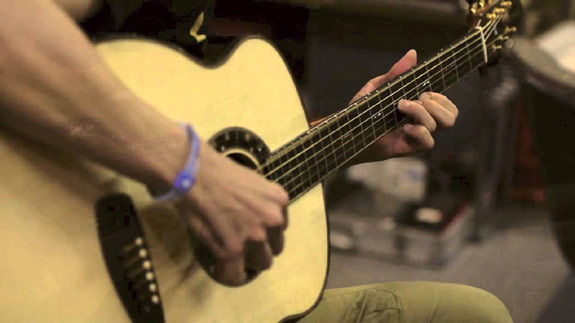 And it's as well they don't, because if they did a good number of us ego-fuelled menfolk would ditch the car and rely instead on ridiculously expensive racing bikes and tight lycra outfits to get from A to B. Which of course we don't. Much.

Okay, so here's another question. When was the last time you went to buy a new guitar and came back not only without said instrument, but also without the will to pick up another confounded plectrum for the rest of your wretched little life? A few more takers there I think.

I’m listening to him and trying to come to terms with the inordinate gap between what he can do and I can do.Thanks to the phenomenon that is Guitar Shop Man, a race of uber-guitarists planted in music shops around the country with the sole remit of thwarting the ambition of people like me who want to buy a shiny new professional-grade guitar—without being a shiny new professional.

So here I am, with that very ambition in mind, staring at rows of gleaming acoustics and wondering what to do next. Guitar Shop Man approaches from the rear and asks if there's anything in particular I'm after. Not really, up for suggestions. This is his chance. He selects his favorite, tunes it in an instant and, on the pretext that I require proof it is indeed a guitar, begins playing it.

He comments on its tonal quality, but I'm not listening to the guitar—let's face it, they're all fairly similar—I'm listening to him (a compendium of Grade 12 studies around the Lydian Mode I suspect) and trying to come to terms with the inordinate gap between what he can do and I can do, while calculating to the nearest thousand hours how much more practice I'd have to cram into the average week to bridge it. And he's half my age.

This is it. Ground zero. I fumble for a moment before letting forth a weak and characterless E chord. I reach casually for an off-the-cuff minor pentatonic run but the nails on my left hand have suddenly grown two inches and I fail.

But now I can't play the guitar at all, and the idea of upgrading seems as inappropriate as three nights at Madison Square Garden. Downgrading to a Kazoo might be a better idea. My fingers creep randomly and soundlessly around the fretboard, and I plan my escape.

So how did Guitar Shop Man come to inhabit guitar shops? Think about it: there's only so much money to be had in professional musicianship these days. So it's in the interest of the pros to keep the numbers down. And what better way to do that than to stop aspiring amateurs like me from buying the instrument that might just propel them into the big time. It's birth control for musos.

But some new guitars must get sold. Some guitarists must get better. Or how has the professional guitarist avoided extinction? And where does Guitar Shop Man come from in the first place? Surely some embryonic virtuosos slip through? I feel it's worth a second attempt.

And so a week later I find myself in another guitar shop, a capo in my back pocket and the look of serious musicianship on my face. I brace myself for the inevitable Guitar Shop Man intervention, telling myself that this time it will be different. I will be strong. I will have confidence in my own ability. And when the sun goes down I will be the proud owner of a new guitar.

"Hi, is there anything in particular you're looking for?"

It's a girl. Not a woman. A girl. To my age-tinted eyes she looks no more than 17. Is this Guitar Shop Girl I wonder? I don't know because I've never seen one before. Is it as dangerous as Guitar Shop Man? Do I need to be afraid? She reaches down her favorite—a Yamaha. So far this is all feeling very familiar. She tunes it. Yes… Then she plays. A week and characterless E chord.

Half an hour later and I'm center stage on the guitar shop stool, Guitar Shop Girl keeping me supplied with a steady stream of new guitars as I rip through a tour de force exposition of delta and piedmont blues techniques. I'm not interested in buying a new guitar. That's not important any more. What's important is that I'm playing the guitar in a guitar shop. And nobody seems to mind. What's more, there are signs that I have intimidated at least one other customer.

I am Guitar Shop Man.

Related
I’m Your Acoustic Guitar’s Mother and I’m Disgusted with You
Michelle Drozdick
Bigheaded People Want the Medical Recognition They Deserve
Laura Zera
I Opened This Neighborhood Florist Shop Because I’m Thirsty for Power and You, My Employees, Better Be, Too
Nikki Campo
Resources