Congratulations! After considering the 32 various teams in the NFL from which you could have chosen, you selected the Oakland Raiders. As a long-time Raiders fan, I've created this guide to help accelerate your assimilation into the Raider Nation.

What to look for: Take a peek up to Oakland's luxury box. See the lifeless corpse that is oddly reminiscent of the offspring of a sewer rat and the Crypt Keeper? That's our beloved owner, Al Davis.

Al Davis, aka The Crypt KeeperSince 1966, Davis has been our organization's glorious leader and as such, he handcrafted the Raiders into a storied franchise with a rich history.* No other owner in the league cares more about winning or has a bigger impact on the team's on-field performance than Davis. Suck it, Jerry Jones!

Provided you are ever blessed enough to speak to Davis in person, simply agree with anything and everything he says. This one piece of advice might just make you Oakland's next head coach. However, if you are foolish enough to contradict the mastermind, enjoy your permanent banishment across the bay to San Fairyland, where you can merrily root for the 49ers.

*When researching Davis and our organization's history, go ahead and omit the previous seven years or so. Hell, start at 1985 and work your way backwards. 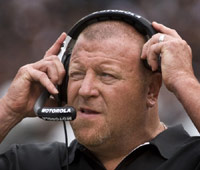 Tom CableWhat to look for: Look over at the Raiders' sideline. See Curly from The Three Stooges? That's our fiery coach, Tom Cable.

After a tumultuous start to the 2008 season, the organization needed a man who could lead us back to the top of the NFL. Davis fired the insubordinate Lane Kiffen and in his place he promoted Cable, our offensive line coach. Cable helped lead the Raiders out of the AFC West cellar to a resounding record of 5-11 and then followed up the next year with another 5-11 campaign. Huzzah!

What has made Cable such an instant success? He is a man who knows how to evaluate a team's strengths and weaknesses. Right away he noticed one glaring weakness of Oakland's past teams: lack of discipline. Cable corrected this Achilles' heel by running a tight ship and keeping the disorderly in line.* There is no better way to prevent players' mental mistakes than by beating it out of them. He's proactive, not reactive!

Darrius Heyward-BeyWhat to look for: See the players on the field with skill sets better suited for a track meet than a football game? Say hello to our draft picks from the past decade.

It's no secret around the league that Oakland drafts speed. We do so for the simple reason that speed can't be coached. A player's quickness is innate and thus ranks above learned qualities like intelligence, fundamentals, and any other useful ability. Plus, with quickness to our benefit, the Raiders have the capability to heave 60-yard bombs all game long! It worked with Dokie Williams in the 80's, and it will work with Darrius Heyward-Bey now.

Also, it's not imperative to address the offensive line during the offseason. You could pull any 300-pound guy off the street and turn him into a Hall of Famer; the position is that easy to play. Disregard how porous the line may seem or how many sacks are given up during the season, linemen don't play an important role in championship caliber teams. Seriously, when's the last time you saw a lineman score a touchdown? Furthermore, have you seen their dreadful 40 times? 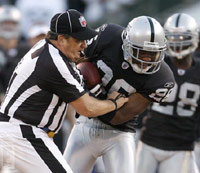 What to look for: There are seven men on the field dressed like zebras. Their job is to stop us from winning by any means necessary.

As a newbie to Raider football, you haven't learned quite yet how much the NFL favors every other team in the league. Rest assured though, there is a league-wide conspiracy against the Raiders. Any doubts can be dispersed with a brief revisit of January 19, 2002. This is the single most important date you'll need to remember. In the future, you may find yourself in heated debates with fans of the other 31 teams. Please make heavy use of this one specific date when discussing an intellectual topic such as “the refs screw my team way more than yours.”

As Satan goes by many names, so does the unholy game that took place on January 19th. The majority of the NFL community knows it as “the Tuck rule game,” whereas New England Patriots fans call it the “Snow Bowl.” However, the Raider Nation affectionately refers to this particular game as the “Snow Job.” All you need to understand regarding the game is that the referees spontaneously created a new rule in order to prevent Oakland from advancing to the Super Bowl. Also, the NFL commissioner was behind the scam; he always is.

What to look for: You!

It's common for most new Raider recruits to deny that they are indeed masochists. It's alright, really! In time you'll learn to accept this shocking revelation about yourself. Look at the facts. You have volunteered to cheer for a team that spends more time beating itself than it does other teams. You picked a team whose colors are silver and black. Know who likes silver and black? Masochists adorned in leather getting beaten with shiny metal rods. The prospect of being humiliated and taunted by all of your friends sounds tempting doesn't it? Search your feelings young Skywalker and embrace your dark side. You now belong to the Black Hole.

Related
The Most Definitive Guide to Dogs (That I Know Of)
G. Raymond Leavold
Capture Your Zoom Therapist’s Interest in Just Ten Easy Steps
McKayley Gourley
Creative Ways to Get Out of Conversations With Men Who Just Learned Who Nietzsche Is
Emily Duke
An Idiot’s Guide to Grieving After an Acquaintance Dies
Evan Purcell
Resources