Before the gladiators started sticking it to each other, before men in tight shorts started running and jumping around for the benefit of lusting female fans, there were the Greek gods themselves. These were the original players, inspiration for the first game developers to keep the gods amused so they'd leave us the hell alone. Let the Games begin!

The supreme ruler of heaven and earth from Mt. Olympus. Overthrew his father Cronus for the spot. Often cheated on his wife Hera, and was once forced to turn a lover into a cow to disguise her. (He might have turned a cow into a Jessica Simpson lookalike, as in "moooove over, Extreme Makeover," but we'll never know since Homer doesn't tell us.)

Lord of the seas. Brother to Zeus, he cruised for chicks in an amphibious chariot pulled by mermaid-like horses with gold manes. This macho display of horsepower led to his scoring with the stunning Medusa in Athena's temple. Too bad for Medusa, though, because when Athena found out, she turned her luscious tresses into snakes. From then on, anyone who looked at Medusa got turned to stone. (Was Athena jealous, or what??)

Goddess of wisdom, peace and war. Scholars may debate whether she had the hots for Poseidon, but they generally agree she was one powerful and crafty bitch. She even went up against Poseidon once, and got the Parthenon built in her honor by the Athenians. Then, when she was challenged to a weaving competition by Arachne, she not only beat Arachne, but turned her into a spider to keep her weaving forever. (Now you know why Poseidon didn't buy her any drinks.) 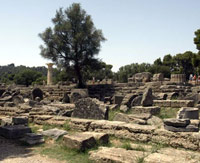 The Greeks were never very good at leveling the playing field.God of the underworld, this brother of Zeus tormented hordes of sinners and fallen demi-gods. For instance, for trying to trick the gods, Tantalus was placed before some fruit trees beside a lake, which disappeared or stretched away whenever he tried to eat or drink. (Hence, the word "tantalize.") Sisyphus once snitched on the randy Zeus, and was doomed to push a boulder uphill, well, forever. Then, with Zeus' permission, Hades kidnapped the beautiful Persephone for himself… that is, until her mother Demeter found out and brought winter on the world. That's when Hades relented and let Persephone visit her a few months of the year. That's also when crops were allowed to grow, and why we have what we now call "the seasons." (Try telling that to Sports Illustrated, though!)

Goddess of the harvest. (In case you were wondering.)

Goddess of love. One hot mama, Aphrodite nonetheless married an ugly, lame man because it made her seem all the more beautiful. Still, she was no saint. (None of the gods were, by a long shot.) In a beauty pageant judged by a prince of Troy, Aphrodite won by bribing the judge with a beautiful woman of his own. She went on to have an affair with Ares, the god of war, that produced two offspring—Phobos and Deimos. (Meaning "Fear" and "Terror.")

God of music and poetry, Apollo was the original rock star of Ancient Greece. Young and handsome, he had groupies, a pre-Fender lyre given to him by Hermes, and numerous affairs with both women and men alike. (Naturally enough, one of his conquests was Dionysus, the god of wine.) His ill-fated tryst with Cassandra, though, resulted in the fall of Troy when Apollo shot an arrow into the foot of a famous warrior named Achilles (to spite Cassandra after their nasty breakup).

The messenger god Hermes is the one to whom everyone drank, with hopes of receiving good luck in return. But one of his children was truly spooky. Pan was half man and half goat (wonder how that happened?), and would follow people into the woods and play an insane but soft tune on a flute from somewhere behind them. This usually resulted in what became known as "panic."

Legend has it that this god stole fire from Zeus and gave it to the humans he'd been empowered to create. This angered Zeus (the control freak), so Zeus chained Prometheus to a rock and let an eternally ravenous eagle feast on his liver forever. (Do you see a pattern here?) Zeus was not done there, either. Oh, no. He also gave a human named Pandora a box that looked like a present, and told her never to open it. When she did, evil and misery flew out, but not hope, which had no wings. (Zeus, you're one sick, vindictive son-of-a-)

At last, the god of love. Son of Aphrodite, Eros went around shooting arrows at people to get them hot and bothered. One time he shot Apollo, who fell in love with a river goddess named Daphne. But he shot Daphne with an arrow made of lead, which turned her off to him. So Daphne turned herself into a laurel tree, and that's why Apollo began the custom of crowning the Olympic Games winners with laurel leaves. (Sorry, Daphne, you'll grow more.)

This was a minor deity who was cursed by Hera, the wife of Zeus, after Echo delayed her with endless talking while she was trying to catch Zeus in the hay with some other forest nymphs. After that, Echo couldn't talk except in echoes, and so was rejected by Narcissus, the man she fell in love with. After Echo ran off, other nymphs then cursed Narcissus so that he would only love himself, and so when he tried to kiss his own reflection in a pool, he fell in and drowned. (Nonetheless, he's Bill Clinton's favorite, after Aphrodite.)

Related
When We Get Married, I Want to Take Your Last Name, Along with Your First Name, Middle Name, Social Security Number, and Dental Impressions
Jim Tatalias
Welcome to Bone & Kibble, the First Restaurant with Dog Waiters
Josh Vellequette
The First Rule of Book Club is We Do Not Talk About the Book
Megan Rogers
Resources