One more trap joke and I fear space mutiny is on the horizon for this hunting trip.

Listen, we need to have a talk. We all agree you're doing a super job as admiral, but we'd appreciate it if you could stop yelling "It's a trap!" at least for the rest of the hunting trip.

I know you might think yelling that has become your "thing," and really, we all thought it was hilarious the first ten or so times you did it, but it's become real bothersome, and we're asking you to stop. I don't want to take anything away from you, but I've heard some of the guys throwing around the phrase "space mutiny," and while that sounds awesome, I wanted to give you a heads up. 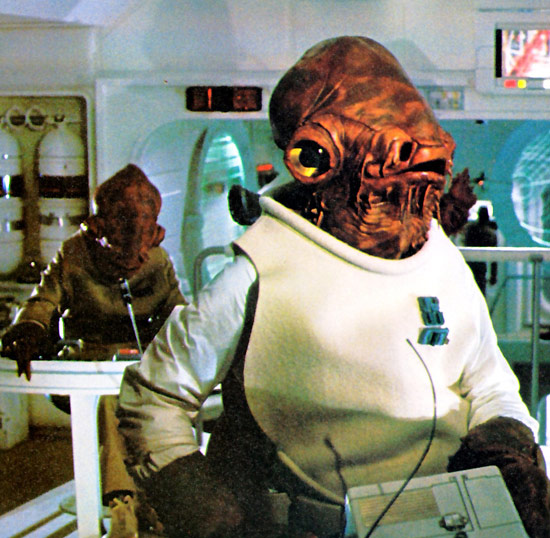 Yes, I understand that those are literally traps we're setting, and that it works as a joke, but we haven't caught anything in three planets, and some of the guys are getting antsy. While it was funny to see that Asyyyriak scurry away the first time you yelled your signature quip, that was the last of the swamp rat jerky you just ate, and we're all getting pretty desperate.

Look, no one appreciates a good joke more than me. You know when we blew up the Death Star and you made that "The Death Star? More like the Nothing Left Star!" joke? I was the first one to crack up. But right now it's about survival, so I'm gonna need you to focus less on snares and cymbals, and more on snares to trap and kill some dinner. By the way, we all thought it was hysterical of you to bring your own drum set to use after jokes, but again, super counter-productive to the hunting.

I know what you're going to say, and let me stop you by saying that no, this is not a trap. There are no hidden clauses, agendas, or ambushes to this, just a request. In fact, some of the guys are wondering if you even know what a trap is, and that maybe that's the core of the issue here. Simply put, it's "a position or situation from which it is difficult or impossible to escape," and while I understand the irony of our current food situation seeming to fit that exact description, I still don't think that justifies the yelling.

Yeah so, no more yelling, no more drums, uh, down with The Empire I guess, and let's just have a fun hunt.

Related
A Young Movie’s Prayer: “Please Let Me Come to a Theater Near You”
Dakota James
In the Metaverse, You Can Do Anything! Except Stop Being Depressed
Simon Henriques
Hold on Boys, I Can’t Break This Ancient Curse without My Tank Top!
Sara Costello
Resources