The 7 Most Important Cosplays

The internet is absolutely flooded with "best of" cosplay lists. Hundreds of them. Millions of them. More of them than I think there have ever actually been cosplayers at all. And all of them break down into exactly two categories:

1. Beautiful Women Wearing Very Little Clothing and Making you Uncomfortable About the Feelings You're Having About a "Sexy" Version of Up

Which is just an excuse to throw together tons of pictures of scantily clad women. Which is fine. They went through the effort to make the costume, and lazy sites like Buzzfeed need an easy, clickable bundle of photos to throw out there so they can go back to remembering how goddamn awesome pogs where, or whatever.

2. Look At this Person Who is More Talented Than You Will Ever Be Wearing a Photorealistic Rendition of a Costume That They Poured More Time, Energy and Bodily Fluids Into Than Went Into the Actual Moon Landing

You've seen the type. The kind of person who builds an Iron Man suit so realistic that the military actually detains him for questioning about how he managed to cram an actual, honest to god arc reactor inside of the chest cavity.

This article isn't really about either of those categories. And it's also about both of them.

Basically, I save hundreds of cosplay pictures. It's a thing I do. Not even in the top fifty weirdest. And some of those I consider super special. So basically, I'm just throwing together a list of cosplayers that are important to me, and hoping you like coming along for the ride. Isn't that goddamn touching?

If you're not immediately in love with this, then I think it's safe to say that we have nothing to offer each other as friends, and you should just stop reading this right now. Otherwise, let's talk about this buff dude for a minute.

I personally like to think that instead of the likely solution (that this was just a really buff guy/model who was asked to "put on this fish head for a second" and just posed for some pictures), that instead this was at one point a normal man, who just randomly came up with the idea of a buff Magikarp. Maybe he saw some fan-art, who knows? One way or another, he decided to spend hours and hours, weeks and weeks, months and months, doing so many push-ups. He dedicated his life to training his body into sculpted physical perfection, all for the purposes of dressing up like a sexy version of a make-believe fish-monster.

Hmm? What's that? You thought I was kidding in the intro about there being a sexy Up? …what, are you like, new to the internet, or something? There's a "sexy" version of everything. There's a sexy version of your childhood dog getting run over by your dad, and then later he tells you it was some guy in a Mustang, because he's secretly jealous of people who get to drive those. So of course there's a sexy version of Up.

Honestly though, what the fuck, internet? It's one thing for there to be some disturbing fan art of Up (and there is. Tons of it. More than you would expect from a film where almost all the characters are dogs and old men), but this is a whole other level. Not only did these girls apparently go through all of the time and effort to make these costumes, but then they decided "Hey, you know what would be a great idea?" how about wearing these in public. That's a thing that sane people would do right?" And not only did they have that thought, but then they followed through with it. 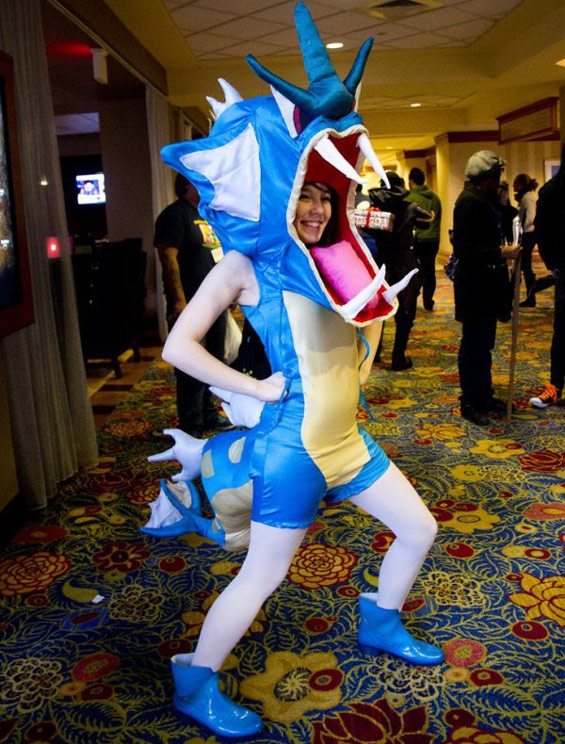 Ha ha ha! Look at that! Oh man, isn't that just the best! 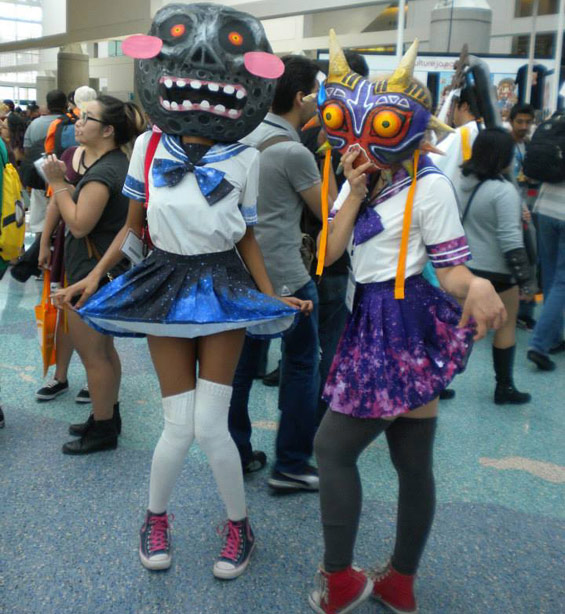 Right, so, at this point I pretty much could have named this article "Sexy Cosplay That Really Shouldn't Be Sexy." But I didn't. So…that killer moon is looking pretty cute, right?

If you for some reason aren't immediately familiar with the plot of Majora's Mask, we'll go over the finer points. The titular mask there is up to all kinds of evil, and is using it's awful magical powers to pull the scariest freaking moon ever created (seriously, whoever did the concept sketches for that should be institutionalized) out of the sky, so it can crash into the world and kill everyone. You control a small child who must travel through an infinitely looping series of the same three days and try and save a world gone mad from its own imminent destruction. The game is rated "E" for "Everyone."

So, you essentially have the two antagonists from one of the weirder Zelda games ever made (and before you try and argue that, this is the game that gave us Tingle. Tingle!), and these two girls said, "Yeah…but wouldn't they be better with long tan legs and tight mini-skirts?" And then they actually made that idea a reality! Even if you're weird, and don't think this is just wonderfully awesome, you have to respect that sort of dedication.

This is the kind of idea you get when playing a video game, while mixing substances that probably shouldn't be mixed, and then not only remembering that idea the next day, but actually going through hours and hours of difficult labor to bring that idea to fruition. That's real dedication right there. Like what have you done, lately? There is exactly one more Sexy-Sentient-Moon/World Devourer on planet Earth right now because of their efforts, and meanwhile all you're doing is reading a bullshit article about cosplay written by some jackoff.

I like Attack On Titan (the anime at least. I've never read the manga). I think it's a really neat idea, and despite a lot of slow, really whiny parts/characters, it's a great show and it plays into a lot of stuff that I apparently dig a whole bunch. But at the same time, it's one of those shows that, whenever a friend tells me that they don't like, I know exactly what they mean, and can't bring myself to press the issue.

For anyone who's never seen it, first off, it's about a group of school children who team together to try and save the local rec center via the evocative power of dance, and secondly, the main character is named Eren Jaeger. This is him: 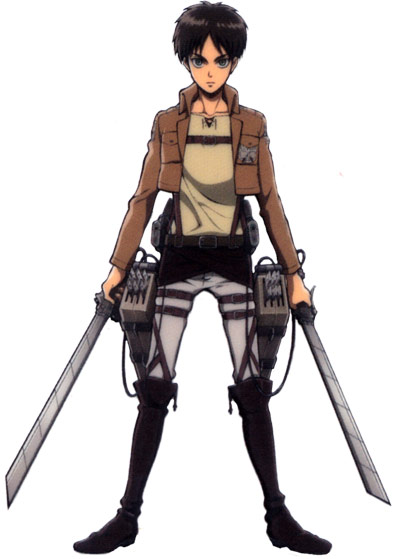 And this is a girl who decided to cosplay as Eren Jaegerbomb: 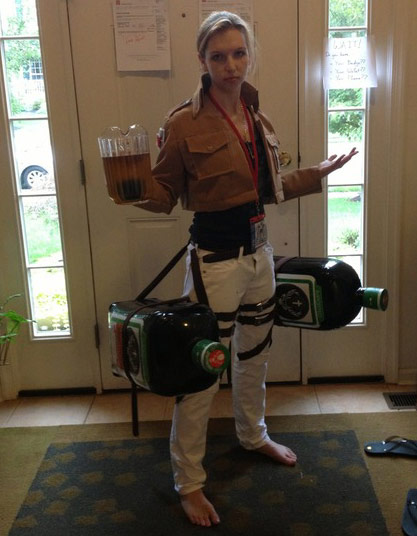 I have nothing else to say on that matter, other then, if you are the girl in the picture there, then you might be the cleverest person ever. And I love you. 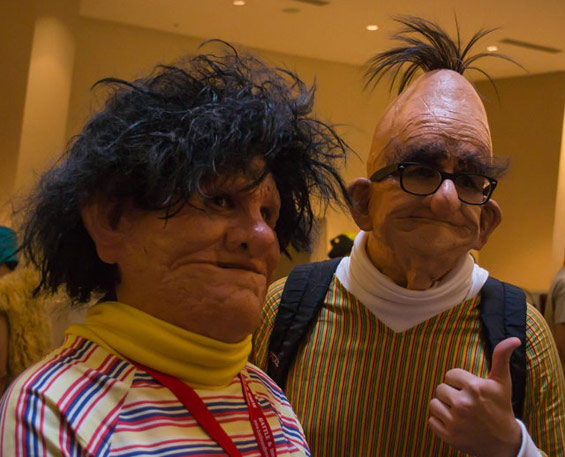 I have a special place in my heart for costumes/cosplays that are needlessly existentially terrifying. Case in point, check out these two dudes who decided to dress up in human scrotal skin and pretend it was a Burt and Ernie cosplay.

Now that you're done screaming in abject terror, let's talk about the sort of thoughts that where required to go into making these costumes. What, you don't want to? You mean you don't want to examine the ideas behind these costumes, lest you lose your mind to the void of madness? Yea, I guess that's fair. Next costume!

It's pretty common to cosplay larger then human characters, because Optimus Prime is freaking awesome, and having a frail human frame shouldn't stop you from living out that fantasy. But it's a pretty common tactic to scale it down so that it's manageable.

Example, here's someone dressed as Bumblebee from Transformers: 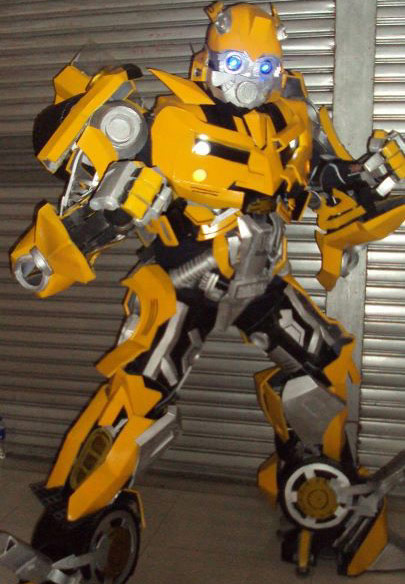 Super cool and super realistic, other than the fact that a twenty foot tall smash-bot with an inexplicable and yet ever-present speech impediment has been reduced to one Shia LaBeef in height.

Cosplayer Alexis Smith, however, thinks that the idea of scaling-down costume size to fit the bodily constraints of us tiny humans, is both adorable, and laughable. So, when she decided one day to dress up as a Hunter from the Halo series of video games, she didn't let the fact that Hunters are twelve feet tall slow her down.

Nope. She just up and freaking built a twelve foot tall Hunter costume: 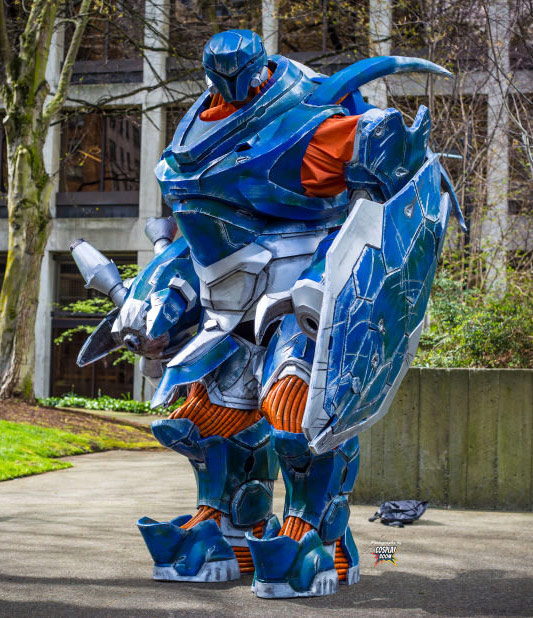 That is cooler than anything either me, or you, the masses reading this, will ever do. And here she is looking exactly as goddamned stoked as you would expect someone wearing that thing to look: 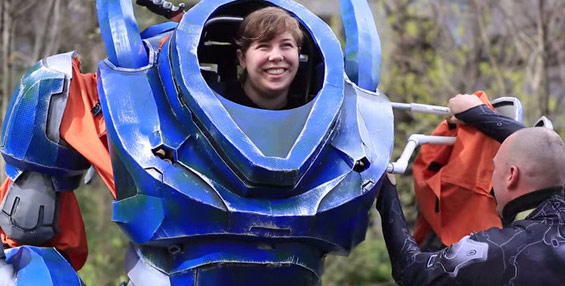 Sure, it takes a couple of people to actually help her put it on, but so what? When you've built something that earth-stompingly cool, you've earned the right to have a couple of man-servants help you put on your colossal murder-armor in the morning.

Related
An Important Update to Your MoviePass Relationship
Brett Bietz
New York City’s Most Unpowerful Couples
Danielle Rackley
The Most Definitive Guide to Dogs (That I Know Of)
G. Raymond Leavold
Resources