If you like Hugh Laurie in "House," you're going to HATE "Trailer."

Some of your professors may claim they don't watch TV except for The History Channel and PBS. To them I say "pssshhh!" My TV has been on continuously since 1993 and, if there are reruns on the major networks, it's tuned to Comedy Central or Adult Swim. So a new TV season makes this my favorite time of year.

There are a lot of entertaining new shows this season, but there are also shows that make us ask important questions, like "Why?" and "What are they thinking?" and "Are these network executives planning to seek professional help for their drug problems?"

Here are just a few new shows (and not ALL of them on Fox) that fall into this category:

Featuring the Naval Criminal Investigative Service Cray supercomputer and its forensic cyber-investigation team, this show's only real point is to further confuse fans of CSI and NCIS. 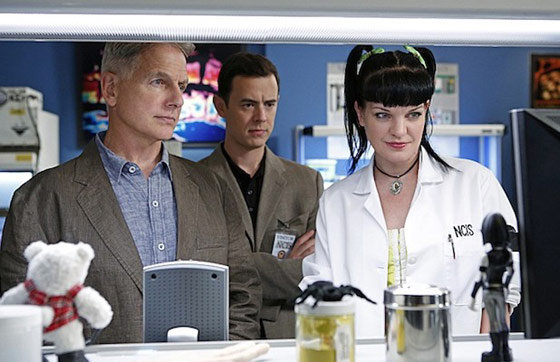 "That is a BEAUTIFUL Reddit thread. What was it we were investigating again?"

In this spinoff of House, Quinton Trailer M.D. is a diagnostic specialist at a charity teaching hospital in Macon, Ga., which serves a neighborhood with many mobile home parks. In the first episode, Dr. Trailer treats a case of severe electrical shock resulting from a man taking a shower with an industrial weed eater, believing it to be his wife. He then diagnoses himself with acute gastrointestinal arrest caused by the tuna salad in the Fox Network commissary. Stay tuned for its companion spinoff, Efficiency Apartment, which debuts later in the season.

I don't even want to know.

This primetime game show features contestants with IQs lower than those of the appliances they are identifying, you guessed it, for large cash prizes.

5. Club Fighting to the Death with the Stars

An American Gladiator spin gives this show a fresh, new twist. Each celebrity contestant is given a 40-pound granite club with jagged metal spikes sticking out at all angles. Expert coaches provide contestants with pointers on clubbing strategies such as, "It's pretty important to get the first shot in." In backstage footage of celebrity hijinks, you can hear Jesse Tyler Ferguson say, "Haha, it's so BIG! If I stirred my Shirley Temple with that thing, somebody could get SERIOUSLY injured! Haha. What the…? Hey look! It's Ann Coulter!"

Call-in radio advice host Dr. Laura is now laying down the law as "Judge Laura." The cases are real; the litigants are real; and Judge Laura, well, whatever. Hear her judgment on middle school students caught spray painting graffiti in the boys' room: "Hey, I understand it's stressful for school kids these days and sometimes you need to do something spontaneous to break up the monotony. But unfortunately, you did break the school rules, so I have no choice but to sentence you to everlasting torment in hell. Bailiff, take them away."

The next defendant is a medical doctor who heroically performed an emergency tracheotomy on a choking child in a convenience store using a sanitary drinking straw to save the young girl's life.

Judge Laura: "I only have one question for you, sir?"

Judge Laura: "Was that your straw?"

Judge Laura: "Well, this is pretty much an open and shut case, isn't it? Vermin like you make me want to vomit. You freely admit you KNEW that straw wasn't your property, yet you callously chose to disregard every basic human principle of property ownership and forcibly take that straw for your own purposes and now you're trying to justify your heinous action with some kind of situational ethics thing. I sentence you to an eternity of everlasting torment in hell. Bailiff, take him away. By the way, do you think these robes make me look fat?"

Cashing in on the success of the Trek prequel movies, this show takes you back to the good old days of Star Trek. Here's a preview of the first episode:

Spock receives an unusual reading from a class M planet. A landing party beams down including Spock, Bones, three to four highly-expendable, red-shirted security officers, and the pot-bellied defender of the galaxy, Captain James T. Kirk.

Kirk immediately directs Spock to scan the area for donuts and prostitutes and motions to the security officers to investigate. There's a horrified scream and the others come running.

Kirk: "Oh my God. Not Ensign Henderson. He was so young. Oh, the agony of command. I'm resigning my commission. I'll get a few acres of farmland in Nebraska…"

Bones: "Get a grip, Jim. This man has been turned into a solid Gorgonzola cheese."

Kirk: "Have you got any Ritz crackers on you, Bones?"

Alien: "I am Zoltroid, lord of the Unitarian Druids. This is our world, Vagisil XII. We have temporary need of your brains to operate our thermostats. We will return them soon. Would you like some raspberry crumb cake?"

Kirk (gesturing arrogantly and fiercely): "I am Captain James T. Kirk of the United Federation of Planets. Are they fresh raspberries? I use Duncan Hines myself and…"

Spock: "Our prime directive prevents us from accepting dessert recipes from other life forms."

I predict this show could be the biggest hit since Survivor: Nudist Colony.