Before Disney starts brainwashing the rest of the world.

Star Wars is no different than Harry Potter or Lord of the Rings or any other wizardy-fairy-goblin-dwarf-hobbit-fuck movie. You ever notice that children seem to like Star Wars over Star Trek? I know, I know, it's all about imagination, but you shouldn't have to be relegated to the lesser mind capacity of a child to be able to use it. You needn't be overcome with nostalgia, reminiscing over misguided childhood perceptions in order to appreciate something beyond humanity, right?

You know why kids like Stars Wars and wizardy-fairy-goblin dwarf-hobbit-fuck shit? Because it's much easier to suspend reality when you don't understand it. It's not that people envy the imagination of a child; they just envy a child's inclination to use it. Adults only tend to suppress their imagination, but it doesn't mean they have less imaginative capability than children…and that's why they prefer Star Trek over a combination of Ghost Hunters and Days of our Lives in space.

2. Anything on Star Trek vs. the Death Star

I say anything because the Death Star is a contradiction of logic, or for you Star Wars fans, not a good idea. Building a moon-sized space ship with some kind of planet-destroying death laser would require quadrillions of tons of metal and other materials, which you would only find on planets. So you mean to tell me they built a huge ship for the purpose of destroying the places where they get the same materials to build more ships? That's like Snoop Dog burning down every marijuana field he could find.

Consider Skywalker in Star Wars…pretty easy for a simple fuck to understand. In Star Trek, you don't see Captain SpaceTraveller or Lt. Commander ComputerStuff.Um, you know they could have just killed everyone on the rich planet of Alderaan without blowing it up, right? Doesn't an empire need real estate? Wouldn't just taking over the planet, enslaving its inhabitants, utilizing all of its resources, building its economy, and providing a new strategic location for their forces be a much better tactical operation for an empire? Apparently not. Darth just wants to angrily pound the big red button because he's a deadbeat dad and still reeling about his suicidal baby's mama, who was a selfish whore for leaving her kids parentless because she no longer had "the will to live." No wonder their kids committed incest.

By definition, a republic or empire would require an infrastructure of multiple nations. Likewise, at the interstellar level it would have to be comprised of multiple planets…so you can't just go around blowing them the fuck up. How much more simple-minded of an idea can there be besides "TO KILL PLANET NEED BIG SCARY PLANET SHIP." Furthermore, how fucked up is the security system that it allows a shitty trash can robot to hack into it in a matter of seconds?

So what is the Star Trek comparison? There's no need for one because the Shit Star is a stupid fucking idea. 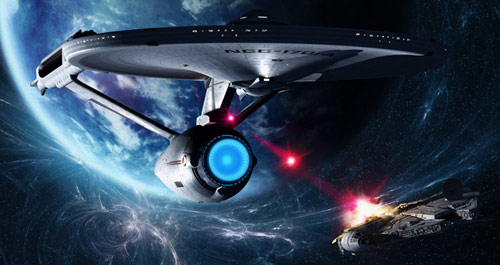 3. Star Trek is for Nerds; Star Wars is for Dorks

Consider how the name of the main character is Skywalker…sounds pretty easy for a simple fuck to understand. In Star Trek, you don't see Captain SpaceTraveller or Lt. Commander ComputerStuff, do you? And the dark side? Ahh, good versus evil. DARK BAD, LIGHT GOOD. What a compelling notion. No social commentary. No ethical dilemmas. No critical or contemplative thought necessary, just cowboys and Indians. Now if you're in to that sort of thing, fine, but you have no right to call yourself a nerd, you fucking dork.

You really expect us to believe that in a time where interstellar travel is possible, they would have such shitty robots? Look at C-3PO, stumbling around like a stupid idiot, uncoordinated, stiff, weak, frightened, and emotional. He's pretty much a cowardly British bitch. A befuddled, insecure, electronic Hugh Grant who has all the human qualities you'd want to avoid putting in a robot. And don't forget his shit-can sidekick, R2-D2. According to the Star Wars chronology, it was actually made out of garbage scraps. Based on its paint job and how it is shaped like a garbage can, R2-D2 literally cannot be any white-trashier. If you are going to make a movie about a civilization far more technologically advanced than we are (but somehow a long time ago), at least try to include robots that do not suck balls. Although C-3PO is a pussy, at least he can talk.

Data however, is the strongest, most intelligent, and emotionless crew member aboard the Enterprise; in other words, the perfect robot. His positronic brain is unmatched. His hand-eye coordination puts an Asian teenager to shame, and because he doesn't have to carry the burden of having emotions (like a robot is supposed to), he truly doesn't give a fuck.

Related
Cartoon Character or Financial Tech Startup?
Elizabeth Simone
All the Reasons Why My Screenplay, “Detective Tarantula: Web of Conspiracy,” Is Not Terrible
Ryan Ciecwisz
3 Practical Ways to Shut Down a Political Argument During Thanksgiving Dinner
Zachary Dziadul
Resources