Put your best foot forward and don't hold your breath.

Lately, it seems like all the couples I know are breaking up. It could be a combination of all of the summertime bodies on display and their penchants for cottage cheese, or maybe it stems from something deeper like fundamental disagreements about what to TiVo, but whatever the cause, they're all acting pretty pathetic right now. The pervasive sentiment shared with me by all of these love cast-offs is their chagrin about re-entering the dating world, which is understandable since most of them were in long-term relationships that started in the heyday of dial-up Internet. When I've suggested creating a profile on an online dating site in lieu of the traditionally incredulous bar scene, it's been met with faces contorted like I'd suggested we go to a Lana Del Rey concert.

I felt compelled to help these souls on their journeys back to coupledom, being the magnanimous person I am. It's perfect because, as one half of the dumbest couple around, I have nothing to lose if my dating stint is disastrous. To ascertain whether online dating is deserving of its smarmy reputation, I created a profile, expecting the supplicants to come rolling in like clubbing hipsters. From my own descent into the depths of online dating, I've compiled a list of four imperatives to guide anyone who thinks him or herself intrepid enough to give it a shot. 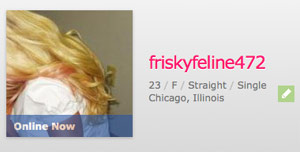 You may be surprised to find out that one out of every person who is desperate has an online dating profile, which amounts to everyone who regularly watches The Client List, give or take a lot. With those kinds of numbers, the odds aren't stacked in your favor to begin with, so you need to give yourself a leg up (maybe literally) where you can.

Without an appealing profile picture, folks are likely to write you off and keep looking until they see one that makes their swimsuit area tingle. Potential suitors will look at photos and imagine what it would be like to wake up next to that person, and you don't want them to be forced to incorporate a narrative of having been black-out drunk the night before to have woken up to your ass face. It's an inscrutable fact that everyone wants to date someone who gives him or her crotch butterflies, so put some effort into your appearance. Ladies, pluck your chin hairs. Men, shave your sack. To intrigue the upper echelon of daters, highlight whatever you perceive to be your best physical attribute, whether that's your Gary Busey smile or your perky labia, and try to minimize your less comely features; a minefield of chest acne should be something your match learns about when they're already naked and committed to the deed, trust me.

A shared zeal for Cory Haim movies and exotic cheeses can only sustain your love for so long. At the same time, you should still be recognizable in your chosen profile picture. There's nothing worse than thinking you're going to Outback Steakhouse to meet a solid nine and realizing that's actually how many shots you'd need to guzzle to go to their outback tonight. Take my profile picture for example: I am self-conscious about my left eyebrow, so I chose an angle that obscures it while still allowing a browsing dater to know what they're getting.

2. Be upfront about what is important to you in a mate.

If you're at a juncture in your life where online dating is your most viable option for finding a mate, you definitely have the leisure of being scrupulous in your search. Sometimes you may find yourself thinking it's easier to settle for whatever you come across rather than holding out for the elusive paramour who meets your (let's face it) unrealistic criterion of not being in a committed relationship and sans misspelt tattoos. Slogging through the cesspool of fecal contenders can leave you feeling shitty and ready to capitulate, but it's imperative that you know your value and continue wading until you find someone worth your while.

If you start dating the first person to compliment your completely adequate looks, you'll look around one day to find you've spent six months with a Fraggle Rock-haired hippie, having never held a conversation whilst the two of you weren't stoned, in a dingy basement that smells like cat entrails and has empty petri-dish pudding cups and fast food wrappers strewn about. Of course, that's an entirely fabricated illustration I conceived to steer you away from the path of least resistance… entirely fabricated.

Use your profile as a tool to circumvent the discovery of your significant other's race or annoying mouth sounds after you've already signed the lease to your love nest. If there's something that you absolutely abhor in a person you plan to entertain the idea of thinking about sex with, be blunt. Online dating is all about being honest, so don't equivocate or you may deprive yourself of naked Skyping-turned-relationship with your soul mate. 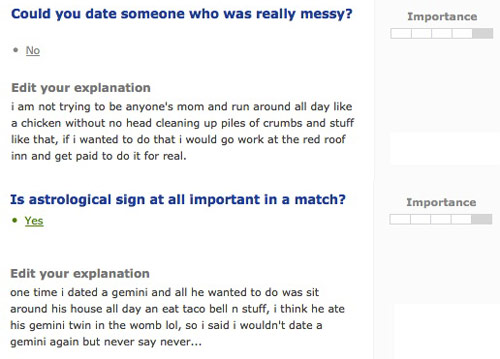 3. Go beneath the surface: show your intellectual side.

Everyone knows that you can't whet your relationship thirst if the person you're involved with is only shot-glass deep, and feeling intellectually parched can dehydrate even the most promising of relationships. A shared zeal for Cory Haim movies and exotic cheeses can only sustain your love for so long, and after you've discussed the nuances of License to Drive and exhausted your supply of extra-aged appenzeller, you're going to be left wanting.

Don't wait for your mate to reveal him or herself as, essentially, a balloon with teeth; gauge their profundity before you've gained ten comfort pounds and extricated yourself from a dating bracket where people with triple digit IQs reside. No one is expecting you to be the next Stephen Hawking—after all, a robot voice can be fuck-all distracting when you're in the throes of passion—but you should use your profile to communicate your ability to cogitate on meaningful topics and requirement that a partner isn't going to pick the low-hanging fruit of the conversation tree. 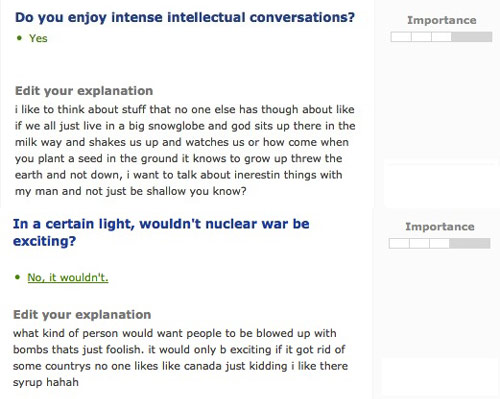 4. Show interest in your potential dates when communicating.

Congratulations! Apparently, your assiduous crafting of a meta-version of yourself was competent if you've garnered interest. Don't think you can stop sucking in your figurative stomach just yet, though. You've worked hard on your profile to show the online dating world that you're something special, and you don't want to undo that by writing messages that read like Tyrese Gibson's Twitter feed.

Communicating with potential dates via the message feature is all about reciprocity, just the same as a vis-à-vis conversation, with the questions you ask being equally as demonstrative of your ethos as the answers you give. How you portray yourself at this stage of the dating game can determine whether you're going to duet at karaoke on Saturday night or sit at home and sing showtunes to your plants, so it's tantamount to your success that you come off as charming, witty, and unimpaired.

When you ask a question of your wooer, try to excavate the depths of their personage with thought-provoking and revealing inquiries. 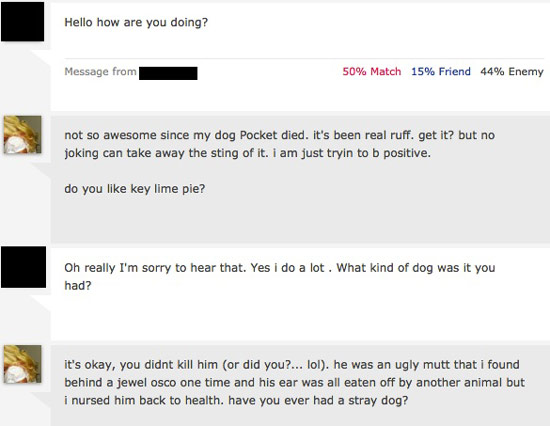 Similarly, when an appellant match supplicates, whether it be for esoteric soupçons or simple reassurance that you weren't victim of a bath-salt cannibal, know that being vulnerable and divulging privy information can form a solid foundation for your future as a couple.

After going through all of this pain-staking trouble, you may still find yourself sleeping single in your twin-size bed. With the surplus of singles employing online dating tactics, it's feasible that your profile might elude the right people, be overlooked, or still, not have enough pizazz (see also: cleavage) to reel in a catch. I, as displayed, spent careful hours tweaking my profile. I took so many self-timed photos of myself that I have a new appreciation for what it means to be Miley Cyrus, I thumbed through a thesaurus searching for just the right words to express my unique personality, and left no question that I'm a genuine and a congruous amalgamation of all traits desirable in a conquest.

Still, after my profile had been up for a day, I only received 36 messages from intrigued men, and by day 3 that number had only risen to 84 entreaties for courtship. I had to admit to myself that my expectation of having fellas clamor for my affection was unrealistic and naïve; Internet dating isn't as effortless or as fruitful as television commercials would have us believe. If you think you're going to have a deluge of daters flooding your inbox, you'll be disheartened at the trickling in of the tepid few.

Moreover, I've learned that the caliber of person you can expect to be contacted by is underwhelming. Of the now nearing 100 guys who have tossed their penises in the ring for my attention, not one of them has a career considered lucrative or commendable. There's been a physician, a nuclear physicist, an investment banker, a rescue swimmer for the Marines, a lawyer, all of the low-brow "professionals" you swear off after you graduate from college, but no one you'd want to admit to dating.

If you're single right now, consider this article me flaunting my relationship in your sullen face. Internet dating boasts neither quality nor quantity of potential lovers for even the most alluring of singles as I've experienced. Having never been single for extended periods, I had no conception of how defeating life as a proactive single person can be, but now I understand why all of my friends have resigned to lives of Chinese takeout for one. John Mayer must have been thinking about his OkCupid profile when he wrote that euphonious truth-tune, "Heartbreak Warfare," because the dating game really is bloody and brutal. All you can do is put yourself out there and hope that if you do meet a rare glittering gem online, they're not some fuckhole whose made a profile for a satirical dating article.