4 Businesses That Would Make Millions if Combined

How to make a fortune overnight, then get sued and lose it all.

Every business is based upon a business model, which is tailored toward a certain demographic of consumers. By that logic, we can deduce that a company that combines two formerly distinct business models will appeal to twice as many people as before, making millions and millions of dollars.

This ironclad logic has already been used in countless instances, with varying degrees of success:

Although the "2fer" business model has been implemented many times in the past, I believe that it has come nowhere near achieving its true potential. Consider the following ideas… 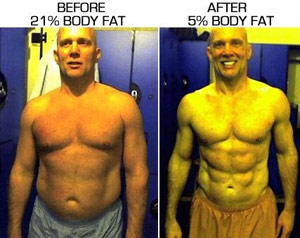 Let's be honest, the only reason anyone goes to the gym anymore is purely for aesthetics; the health aspect of exercise has completely flown out the proverbial window in the last decade. Guys go to the gym to get ripped, girls go to look good at the beach; that's it. Our generation has grown up in a culture increasingly devoid of substance, one that values looks and materialism over everything else. I wanted to include some examples of "everything else," but my hands are covered in self-tanner and I don't want to get it on my MacBook Pro.

The lack of an authoritative source of fitness information simply adds fuel to the fire. Rather than being informative, health and fitness magazines have become supplement peddlers, devoting six-page spreads to the latest FULL THROTTLE DOUBLE STRENGTH EXPLODE supplement that promises to make your biceps 23 inches and your dick look like an elephant's foot. Guys shovel this down their throats in the vain hope that they will eventually look like the Governator, and girls scarf diet pills after not eating for a week in order to look like Victoria Beckham.

Guys wanna be jacked and tan, girls wanna be lean and tan. But everyone wants to look like they're in shape and tan (sorry gingers). In the Information Age, instant gratification is the name of the game, so combining two time-intensive activities like exercise and tanning would be a real moneymaker. Imagine a place where like-minded people could load up on semi-legal supplements and work out until their organs turn to oatmeal, while tanning until their skin looks like a lampshade in Leatherface's house… together! 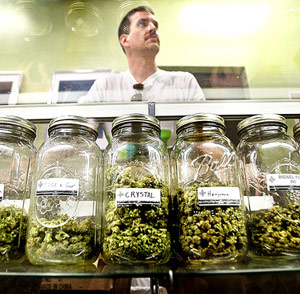 This one is self-explanatory. For those of you who (are lucky enough to) live in one of the 16 states (and the District of Colombia) in the US that have passed legislation to legalize the use of marijuana for medicinal purposes, you are familiar with the term "cannabis club." For the rest of you, allow me to explain the long and arduous process that has taken marijuana from dime bags in the ghetto to retail stores across the country:

As we learned from Reefer Madness, marijuana is known to decrease motivation, making its users want to just "chill." A popular activity to partake in while chilling is watching movies. And eating your body weight in candy.

P.S. Do you have any idea how much money you would make off snacks alone in a movie theater that sold weed? 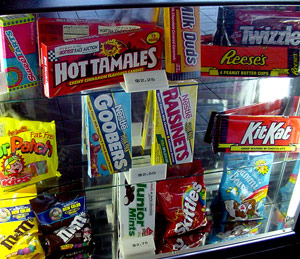 I'll have one of everything, please. 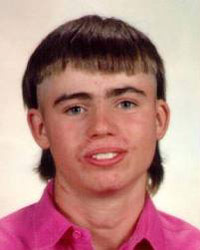 I cut my own hair and wrote the book "Microwave Cooking for One."

For most men, getting a haircut falls somewhere between shoving an ice pick up his urethra and watching Gigli on the list of "fun ways to spend a Saturday." Why is this? The surly receptionist behind the desk? Because the ambiance in most hair salons can be likened to the waiting room in a Laotian brothel? Or simply the fact that you're forced to trust your appearance for the next month to a "stylist" who looks like an ex-con recently paroled from a women's prison?

Whatever the reason, the fact remains that most men have a certain aversion to hair salons and haircuts in general. Much of their frustration stems from the fact that they're being forced to pay for something that they would do themselves if not for the risk of ending up looking like a teenage meth head from Arkansas.

If businesses could find a way to take advantage of this dissatisfied niche market, the financial rewards would be huge. One way to accomplish this would be to combine hair salons and strip clubs, allowing men to turn the unavoidable burden of getting a haircut into an enjoyable outing with their friends. With strippers and alcohol.

Becoming a hair stylist requires two things: two hands and an IQ above 70. Since (some) strippers meet those qualifications, one could quickly amass a qualified workforce by recruiting dancers from local gentlemen's clubs and groups of women crying outside high school guidance counselors' offices. To ensure that only the highest possible quality strippers are hired, they would be put through a rigorous vetting process to determine a) whether they are attractive or not and b) how many usable hands they have.

One of the worst parts of getting a haircut is being forced to read a 4-month old issue of Conservative Teen, or another literary abortion while waiting. No more! At this hair salon, clients could order a drink at the bar from the bartender (who is a stripper) and get a lap dance while waiting.

Instead of overwhelming clients with hundreds of haircut options, this establishment would simplify the choices and offer only one type of haircut: the BOWL CUT. This is necessary for several reasons: 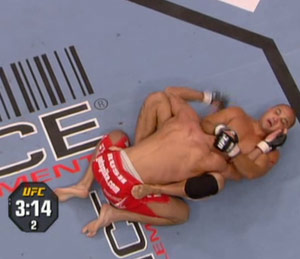 It's not gay if you have 2mm of Lycra separating your penis from another man's face.

The idea of a bare-knuckle, no-holds-barred fight between two men at their physical peak is about as awesome as it gets. Because of liability concerns, however, no such fight will ever grace our televisions. Instead, we're forced to sit through the Ultimate Fighting Championship (UFC): an adulterated, sub-par substitute.

Despite this fact, UFC is one of the most popular sports in the world, with viewership rising to nearly ten million for some fights. In the ring, fighters try to live up to the "ultimate" name of their sport, but consistently fall short due to the strict set of puritanical rules that include:

How can we expect these helplessly repressed athletes to become "ultimate" if they can't poke each other's eyes out? If they can't punch their opponents in the spine? If they can't bring switchblades into the ring in the event of a draw or split decision?

The reality: they can't.

The solution: establish a More Ultimate Fighting Championship (MUFC) in a privately run prison, where prisoners on death row fight to the death.

The United States has the highest rate of per-capita incarceration in the world, with 0.7% of the adults in the US population in 2009 (about 2.2 million people) behind bars. That number doesn't include those on probation or parole, which brings the number up to about 3.1% (7.2 million) of adults. The most violent and heinous of these offenders are condemned to death, deemed too dangerous to be released back into society. Because the process of enacting the death penalty is expensive and time-consuming, however, many of these offenders spend years on death row awaiting their execution.

In a country where political correctness often trumps rationality, the only way an event of this nature would be allowed to take place would be if it were housed somewhere where the rule of law isn't enforced. Inside prisons, there is practically a "rule of law vacuum." This is particularly true in private prisons, which are essentially concrete anything-goes zones for "do it yourself" tattooing and shower-related crime. 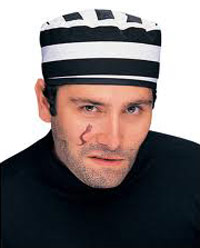 "I fight to postpone my death sentence. And to avoid shower rape."

In the MUFC, prisoners on death row would be arranged into a tournament-style bracket, pitted against each other one-by-one until a winner is crowned. Since there are currently 3,170 prisoners on death row, we could watch 1,585 fights before running out of contestants. Once this happens, we could simply lower the requirements for a death sentence.

One of the most significant aspects of the MUFC would be its positive effects on society.

First, the revenue accrued from MUFC fights could be used to benefit society. In 2010, the UFC made at least $465 million from Pay-Per-View alone (they haven't released the official figures). If you were to include revenue from ticket sales, advertising, and merchandizing, that figure would rise substantially. For the sake of argument, let's assume that they generated $500 million in 2010 (a conservative estimate). Since we can also assume that all of the aforementioned revenue streams would grow as rules decreased and badassness increased, the MUFC figure would be substantially larger.

This revenue could be used to fund national health care, improve public education, increase renewable energy spending, or bolster any other cause worthy of investment. In a stunning display of irony, the most violent and immoral sport in history could solve some of the nation's biggest problems.

Or it could be used to buy 500 million lottery tickets, with a chance of multiplying the earnings several times over!

Second, in addition to the financial benefits, the MUFC would have a tangible effect on crime rates. Whether or not you believe that the death penalty deters crime, the possibility of being forced to fight the biggest, scariest, tattoo-covered murderer in the Western Hemisphere would certainly have a strong psychological effect. Violent crime would drop overnight. 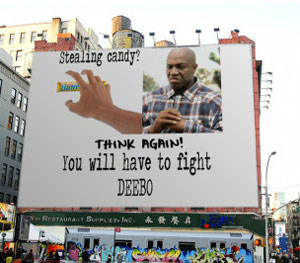 Find a prison recently shut down due to overcrowding or budget constraints and transform the yard into a cage fighting arena.

Transfer all death row inmates in the US to this prison. Try to avoid a Fugitive-like escape attempt en route.

Participants: convicted prisoners on death row. You cannot just "sign up" for MUFC; fighters must be violent criminals, because we only want to watch people fight who have had practice.

Rules: same as in all Steven Seagal movies (no rules).

Performance-enhancing drug use would not be punished, it would be encouraged. How do you think home run records are set? In order to push fighters to the limits of human capability, steroid use would be supported.

When the Geneva Convention tried to prevent President Bush from torturing unconvicted prisoners, he acted as any true patriot would: he moved the torture centers offshore. It is in this same spirit that the MUFC would be established: by eliminating impotent rules and raising the stakes, we would finally be able to watch a fight worthy of the obscene UFC Pay-Per-View prices.

I often wish an intruder would break into my home at night because maybe HE will take my Spider-Man pajamas seriously.