The Truth about Mel Gibson

"I deserve to be blown first, before the fucking Jacuzzi!"

So I just want to get some stuff off my chest about this whole Mel Gibson drama that has been going on. I've heard the tapes. I've read the backstories about him and his ex-girlfriend Oksana Grigorieva. Hell, I've even made countless jokes about the both of them on Facebook and Twitter. For the record though, let me say that domestic violence, of any kind, is NOT funny in the least. You know what is funny though? Batshit crazy people! Since Mel Gibson has proven to me beyond a shadow of a doubt that he is 100% batshit crazy, I felt I should address the most recent highly publicized insanity surrounding him. 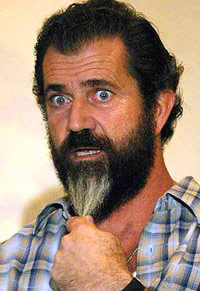 Oh shit, you were recording me?!Personally, I've always thought Mel Gibson was a pretty decent actor, what with all his emotionally disturbed, dramatic roles and all, then it occurred to me recently that he wasn't acting when he played most of those roles. In fact I'm not clear anymore on whether he can act at all or if he was just always cast to be the crazy, lunatic, ranting, violent man that he is. To illustrate my point, let's take a brief look at some of the blockbuster movies he's well-known for, in which he gave some of his best “performances.”

Ransom: Overly violent man on a vendetta rampage about his kid. (Apparently just Mel being Mel.)

Conspiracy Theory: Crazy paranoid man thinking people are out to get him. (Apparently just Mel being Mel.)

Payback: Overly violent man out of control on a vendetta rampage. (Apparently just Mel being Mel.)

The Patriot: Overly violent man on a vendetta rampage about his kid. (Apparently just Mel being Mel.)

What Women Want: Misogynist asshole plotting to bring a woman to her knees. (Apparently just Mel being Mel.) 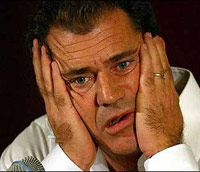 I can't believe they finally figured out that I can't act.Yeah sure, he has other movies, but the aforementioned ones are really most of his big, “Oh Mel, you're such a great actor” movies. But clearly he wasn't acting at all, just filmed being himself. Kind of takes the wind out of his acting career really, don't you think?  So congratulations Mel, not only did being a totally abusive douchebag, on the phone while being recorded, make the entire world realize what an ass you really are, it also made us all realize that you completely suck as an actor. I don't care how much you've played with Whoopi Goldberg's kids (besides, I never trust a person without eyebrows), you are still a racist, bigoted, sexist asshole and now the whole world knows it for sure. 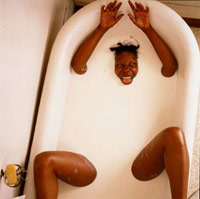 Is this what you do Whoopi, when Mel is “playing” with your kids?I can honestly say that I don't care what has occurred in their relationship, or what Oksana has or hasn't done to, or for, Mel, one thing is crystal clear: Mel Gibson is WAY out of control and completely fucking nuts! There is simply no other reason or excuse for acting that way, regardless of what transpired between the two of them. He can't even attribute it to an isolated momentary lapse of judgment since not only are these multiple phone calls, but he also has a history of things being “blurted out in a moment of insanity.” I'm sure you all remember his racist/anti-Semitic remarks a few years back?

Whatever the motivations for all the crazy talk were, though, there was really one aspect of the second and fourth tape that really hit home with me personally which I would like to address. Specifically the two lines about the Jacuzzi: 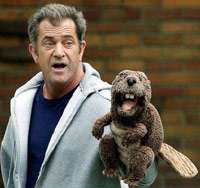 Mel, you should know by now that what you do with your beaver isn't always private.Clearly I have been neglecting my Jacuzzi more than I previously realized. I have never once fucked my Jacuzzi, nor blown it for that matter. I'm starting to wonder though if this is part of the standard upkeep and maintenance expected of me, which I've obviously neglected. Look, I'm not saying there isn't heat involved in the relationship that I have with my Jacuzzi, I simply can't stomach the idea of fucking it or blowing it. To be honest, my hesitation to bring our relationship to a sexual level is in part due to the fact that I think my Jacuzzi is a bit of a fucking whore! From what I've seen, it will get all heated and blow the very second it gets turned on, like a fucking bitch in heat, regardless of who is waiting to climb inside! I happen to know for a fact that it has had several people inside of it already and sometimes even more than one at a time. Furthermore, it always seems to be open, wet and ready to go, at any time of the day! Frankly, it's all I can do to just keep that thing disease-free, let alone making sure it is fully serviced on a regular basis. Besides, when it comes right down to it, physically, my Jacuzzi is really kind of a tub! Maybe that makes me superficial, selfish, and negligent in our relationship, but I'd rather be that any day, than have to fuck or blow that dirty BITCH, CUNT, WHORE, GOLD DIGGER! ALL TRUE! (crazed panting)

More Like This
Five Little-Known Facts About Davy Crockett
Ryan Ciecwisz
List: What Your Favorite Comedian Says About You, A Straight White Man
Elana Spivack
5 Reasons Why Orson Welles’ Passion Project About a Tap Dancing Canary Who Dates a Human Man Failed to Get Made
Ryan Ciecwisz
Comedy Courses

I’m so proud of my son for starting his lemonade stand. How many kids put in the work to launder stolen lunch money?