Childhood is tough. Parents boss you around, the bully in your class bosses you around, the girl who is tired of playing HOUSE but instead opts to play OFFICE and gets to be your boss bosses you around…. She also charges you with imaginary sexual harassment, which isn’t fair, because there’s nothing imaginary about the fact that she’s developed first. But that’s your problem to begin with. When you get to the bottom of it, every childhood problem boils down to not being big enough. Luckily that all changes…for some people.

Size is a major factor into one’s presence…at girl’s birthday parties. The tall boys are the ones chasing the girls around (later in life they’ll be the ones ordering a round of tall-boys for the ladies), the average guys may be a little less involved in the backyard full of festivities, and the short guys are the ones peering longingly over the fence…on step stools. It’s enough to make you yearn for a doctor…but that’s an entirely different game…and only the TALL boys are allowed to play.

Size has innumerable advantages besides reaching mom’s hidden candy stash and dad’s gun. It gives you confidence. Why else do you think short guys have overcompensating personalities? We become very obnoxious and boisterous, always picking fights, chasing after our lucky charms, starting massive wars in Europe, lifting X-wings, developing a mind-blowing sense of humor, fitting into your clothes, and learning sexual techniques that will bring you to your knees….

So we can give you a kiss on the cheek. 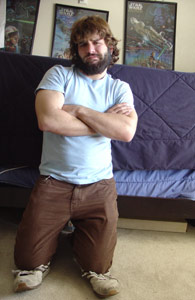 This joke went right above your head.

Any short kid worth his salt still has a bitter spot deep down inside that wishes that one day he’d go all Incredible Hulk and kick everyone’s ass. Everyone knows this too. People will try to cheer you up, but it only manages to sink you lower. “At least you can sneak into tighter places,” they’ll say, without realizing the truth of their words. That place is called your own personal hell; you have to do a lot of self-hate burrowing to get there. And don’t even get me started on puberty. One day someone finally comments on the fact that you’re not really that short anymore, more average height. They’ve successfully ripped the lid off your little pity box, and now you’re unjustfully unhappy. That’s the worst kind of unhappy.

No matter how long you’re average height, you’ll never forget your short days. I suppose you could look on the up side: find an average girl and an average job, have a few average friends who show up an average of once a week. Until that just plain average day where you buy an average gun and point it at your head with average accuracy. You’ll miss however, because you’re still aiming to be just a little bit taller. With any luck, the bullet will leave a hole in the wall where you’ve been charting your growth progress. Look at that, a new goal!

Just like the one you can’t slam dunk in.

No matter what angle you look at it, height makes things easier, like women. I’ll give you two-to-one odds that she’s not going to want to double down unless you’re a high roller. So take your stakes and stick them in the ground. The big guy at the office is making leaps and bounds but you’re having to fight for every inch. The boss loves him like he loves his own son, who’s 15 and still taller than you. How did everything get so bad? Your life is spiraling out of control down the toilet…the kid’s urinal to be exact…because you’re still able to use it.

So the lady situation is killing you. All your friends are making like bandits robbing the Lady Bank, bandits who the clerks note are over six feet as they exit the door with measuring tape. For once, you’d like to walk up to a lady at the bar and actually be able to see over it. For once you wish your date could wear heels. For once you’d like to ask “What’s cleavage?” without your friends laughing and patting your head. You’ll wonder if it’s ever possible for a woman other than your granny to find you handsome. You’ll then wonder just how socially unacceptable it is to date your granny. Then you’ll wonder what ever made you think you could take your grandfather; he’s got a good six inches on you. You scream out in frustration at the lonely night asking if size is all that matters to women. “Not at all,” will be the response from a lovely young thing making eyes right at you. “But height does.”

If you’re lucky, she might still stoop down to give you a kiss on the forehead.

Like the saying goes, life is short. Okay it’s not really a saying so much as a put down, but the point is, you got to get over these obstacles and move on. So you weren’t meant to reach for the stars. Doesn’t prevent you from planting a few seeds here on Earth. At some point you have to learn to stand up for yourself, pick yourself up off the ground and stand tall. Raise the bar for your expectations. Positive thinking will get you going. Find some areas where you naturally soar while others fall short. Don’t get your head up in the clouds though, always best to stay grounded. Come Hell or high water, you should always be able to keep your head up. Try some new things, see what floats; it’s all about your attitude. Get a little spring in your step, and watch your progress grow. You’re climbing high now, little guy. You’ve finally got the point. You’re glowing for all to see. Every morning you’re on the up and up, and nothing can bring you down. You’ve got determination in your veins, and you’re above it all. The ones who said you couldn’t come through, boy you’re sticking it to them. WHO’S THE BIG MAN NOW?

“Mike, who are you talking to in the shower?”