Now if my memory serves me correctly (which it usually doesn't at this age), it was about two weeks ago I went to the doctor complaining of "glaucoma-like pain."

My doctor, a handsome, young 53-year-old boy, listened intently to my symptoms (oh Gosh I go on sometimes!) and he suggested giving medical marijuana a try. 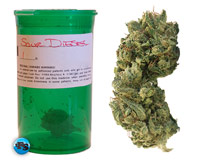 Sour diesel? I hope it's under $4/gallon, my Medicaid doesn't pay for much. Now, let me be the first to say, I always thought marijuana was for hooligans, whippersnappers, hippies, and negroes. But Dr. Jewstein told me that this marijuana has been researched and is safe and proven to temporarily provide relief for my glaucoma. Well, times are changin', I guess! (Negroes must have moved on to crack.)

He prescribed me a moderate amount of medical marijuana, showed me how to use it, and reassured me that this was safe and effective. He said I should try it for a month, and call for a check-up after it's gone, and we'll go over how it went.

Once again, I was cautious to do a drug, but I trust my doctor and also I'll do anything to help heal my glaucoma at this point. Plus at Scrabble, Agnes told me that she knows a guy who had glaucoma and he feels all better now because of medical marijuana. Then Betty pointed out that technically all my cholesterol and heart pills are drugs too! Then I got a Triple-Word Score.

So, after church on Sunday, I decided to start taking my medication. I had Ed light the "joint" for me (my fingers are too frail). Ed lit it with a match and I sucked in and inhaled like my doctor told me to do. I took a few more puffs, sat back in our couch, and turned on our TV set.

Have you ever noticed how Socialist the Price Is Right is, man? Think about it, dude. And who does this Sue Johanson SINNER think she is? I tell ya, there's a special place in Hell for that dirty-mouthed, dildo-toting, devil-worshipping, dominatrix-suggesting, dirty-Sanchez-enjoying dame. Holy shit, I just totally alliterated! Not even on purpose, either. Did you hear that shit, Ed? No? Goddamnit it was amazing.

Ed–hey ED–Ed. Ed. Hey Ed. Ededed. Do you wanna like go mallwalking today? Oh, I mean ‘cause I don't feel like going anymore, but if you're still going, you should totally pick me up some Arby's, bro. I'll pay you back. I know I still owe you for that Reader's Digest last week, but I told you man I'm waiting for my Social Security check; it's supposed to come on Tuesday and I'll pay you back then first thing I swear.

Who thought of "brushing your teeth"? Why don't we brush other body parts?

Hey, do you remember if I locked the Oldsmobile or not after we got back? Oh yeah, you were driving. Well, did you remember to turn the lights off? You sure?

I can't believe we lived during the Holocaust. Like we were straight up alive for that. Crazy stuff. What a story to tell the grandkids. Speaking of, I forgot to send Timmy five dollars for his birthday.

How does Alex Trebek know ALL these facts? What if he's pronouncing something wrong but he just acts like he knows what he's talking about? Hey, do you think…is Matlock on right now?

Make me some cheese.

In my day we had to walk a mile to school every day uphill through snow, and now kids are complaining because their iPod Touch isn't an iPhone? I tell you what, these kids deserve a good spank on the rear.

Oh man this hard candy is so good. Sooooo good. Whoever invented butterscotch is a GENIUS.

I think my Alzheimer's is getting worse, but my glaucoma's getting better. Hmm.

Why do they make these crossword puzzles so small? I can't read the fucking clues! Even with my reading glasses.

What's that noise? What? Nevermind. I thought I heard something. It might have just been me moving my leg.

I gotta crash, bro…. Pick me up some all-you-can-eat buffet from Perkin's or some shit…. Peace……

Hey Ed………there should be a coupon in my coupon pouch.