The Four Bridesmaids of the Apocalypse

When Gossip, Menstration, Promiscuity, and Marriage get together, it's trouble.

From the novel Jack's Inferno, by Mike Lamb

And behold, I saw a woman on a white unicorn,
And she was given a cell phone
That she might tell the world the affairs of others;
And all that she spoke was boring,
And she was called Gossip. 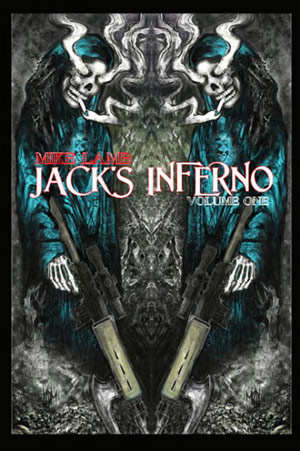 And then, behold!
I saw a pale unicorn,
And it rode out from the pit;
And on it was Marriage
And Hell followed with her.

I'm at the Widow's Chapel. There's a crowd gathered for the funeral. I mean wedding.

The scent of death is in the air.

Behind me is the hulking stuffed bear with the shotgun jammed in my ribcage. The tuxedo-clad enforcer. The Bride's hired muscle. And presumably my best man for the wedding. His face is stitched into a scowl. His button eyes glower at me.

Beside me stands the Bride. She clutches my hand, drawing blood. She's in a trance. Eyes glazed. Mechanical smile.

The bridesmaids surround me, watching like hawks. Gossip and Promiscuity trade whispered secrets as they stare at me.

A hunchback plays a twisted funeral march on the pipe organ in the back. The festivities are about to begin.

In front of me is a dead and bloated Elvis in a sparkling jumpsuit. He's crucified to a bejewelled golden cross. He has a conjoined twin growing from his torso. The deformed mutant wears a priest's collar and addresses the people gathered in the chapel.

The mutant twin is the only one of the two (if you want to classify them as being separate) that moves or speaks. His tiny malformed hands hold a book (probably not a bible). The bloated corpse-host is…well, dead weight.

The first attempt is interrupted by furious shouts from the louder and drunker members of the congregation ("get on with it!" "cut his head off!" "show us your tits!" and things of that nature).

Mutant Elvis stops for a moment, stares out at his overzealous flock, and begins again. "Dearly beloved…"

"We are gathered here today…"

One of the bridesmaids, Marriage, steps forward. She's a dust-caked skeletal hag. She pulls a large diamond from out of her eye socket.You know, I gotta be honest with you…I pretty much tuned out most of the speech. I was too busy staring at The Bride. In horror.

She was…changing. She looked more or less human when I first met her. Ah, those were the days. But now…part spider, part mantis…all demon. Hideous. Twisted. Hungry. Six legs under her dress. Preying insect arms through the sleeves. Chattering mandibles under her veil form a mouth of thorns. Eight eyes stare out at me. It's a full-blown Kafka-style metamorphosis.

It's not the same person anymore. It's not even the same species. She's fallen under the spell of something dark and unholy. I imagine a Cosmic Bitch Queen reaching out across the cold vast eons of time and space to possess her mind and control her every movement. Twisting her flesh. Sculpting her into a new and terrible form to strike fear into my icy black heart. Tapping into some greater lurking evil with a purpose unfathomable by the minds of men…

Suddenly I'm not looking forward to the honeymoon.

"To have and to hold, to enslave and to control, to torment and to abuse, to devour and to digest, in sickness and in death, as long as you both shall rot, forever and ever amen?"

"NO!!! HELL NO!!!" I scream, disregarding the shotgun resting against the back of my head.

"I wasn't asking you," the deformed priest calmly tells me. Then to the bride he says, "Click three times for I do."

"Click-click-click!" Oh God, she talks in tongue clicks. I think I'd like to be shot now.

"The ring, please," the half-priest continues.

One of the bridesmaids, Marriage, steps forward. She's a dust-caked skeletal hag. A grim reaper with wrinkled tits in a ragged white dress. She pulls a large diamond from out of her eye socket. She opens her mouth and pulls a rusty nail from her throat. She crushes the nail and the diamond into her hand. When she opens her palm again it holds a ring. The Bride looks at it covetously ("Click-click-click!"), then snatches it with her mouth and eats it.

"Then by the power vested in me by Hell, Graceland, and the Rock-n'-Roll Hall of Fame, I now pronounce you Man and Wife. Ashes to ashes, dust to dust."

Someone is ringing the church bell. The hunchback bangs out something loud and terrible on the organ. A raven perched in the rafters begins quoting Edgar Allen Poe. 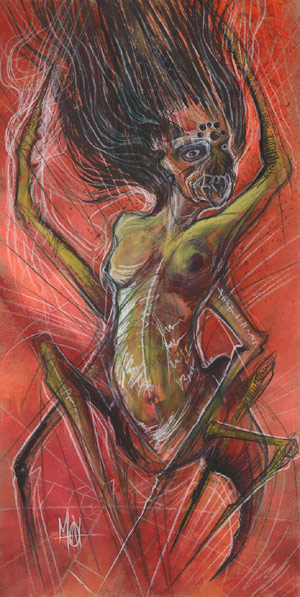 The bridesmaids erupt into a howling cacophony of celebratory cackling. Menstruation screams pointlessly. Then she slaps me. Promiscuity grabs my crotch and licks my face. She also slaps me. Gossip is describing the scene to someone on the phone.

They all jump back on their unicorns and gallop in circles around me and The Bride like a savage Indian raid. The drunken audience of strangers is jeering and firing gunshots into the air.

Tiny Mutant Elvis closes his tome and slips back inside the jumpsuit of Bloated Corpse Elvis like the head of a turtle withdrawing into its shell. A black velvet curtain is lowered and the crucified Elvis is hidden from sight. On the curtain is a painted portrait of—feel free to take a wild guess on this one—Elvis. The patron saint of short-term matrimony and all romantic gestures committed during blackouts.

The gun barrel remains against the back of my head. Just in case I was thinking about running. Which I was.

I drop down on one knee, and elbow the stuffed bear in the balls. I'm not sure that he has any sewn on, but it's worth a shot. The jolt of confusion goes straight to his trigger finger as he blindly fires off a round. The buckshot cleaves off half of Gossip's face, her cell phone, and the hand that was holding it to her ear.

I grab the double barrel and guide the bear's aim towards Menstruation. Before he can recover his wits I force his finger to pull on the second shell. We miss the intended target but manage to hit Promiscuity instead, knocking her off of her one-horned pony.

The bear wrestles the empty shotgun from my grip and slams the stock against my head. Bastard.

I sprint headlong at Marriage through the swarm of stinging wasps. I tackle the bitch. The audience is still roaring from the pews. The Bride splits her gown open and sheds it like dead skin. She stands naked before me. Her veil drops off and floats to the ground. She has the body of a spider from the waist down. But she still has the upper body of a woman, aside from the praying mantis arms and…well, whatever her face is now. Her skin is smooth and radiant in visceral red and tan hues. Her nipples are blood red thorns, sharp and stiff. Her nudity makes me rethink my definition of what is truly obscene.

I stand petrified before her. My erection betrays my fear. Damn you Libido! Why won't you die!?

She spits out a thick sticky strand of webbing from what I can only assume is her mouth. I roll out of the way at the last second. She launches a second strand to the ceiling and scurries up it, towards the rafters. My skin crawls.

Marriage is still standing back by the altar. She drops her jaw and spits out a plague of wasps.

Menstruation charges me on horseback. I dive out of the way, but the stuffed bear behind me is trampled. The hooves rip open his fabric skin and sawdust pours out with a certain illusion of gore. Mr. Teddy begins dying loudly and dramatically with shameless Hollywood grace. He clutches his war medals and looks around as if he's expecting another one for his current Oscar-winning performance.

As I look up I see my black widow bride weaving a web. Again I let out an uncontrollable shudder of terror and disgust.

Menstruation pulls a sharp 180 and prepares for another charge at me, screaming madly all the while. I whip the sheet off the catering table, flinging forks and glasses at her in a sad attempt to try and slow her down. Also, I manage to completely ruin the cake. She breaks into tears as it hits the floor. Sometimes the small diversions are the most effective.

I sprint headlong at Marriage through the swarm of stinging wasps. I tackle the bitch. The audience is still roaring from the pews.

And then I get an idea. I pull out my lighter. Let's see how flammable the old girl is.

Her dress is as dry and brittle as old parchment. It lights quickly. She's a fantastic inferno. I step back from her as she flails her burning limbs blindly towards me. She spreads her wings (that I never even knew she had) and flies around the chapel with all the spastic grace of a flaming moth (always trying to find God in candles and campfires). This action, of course, only serves in spreading the blaze. Pretty soon the entire building is an oven.

The chapel is on fire. The bridesmaids are on fire. Crucified Elvis, the drunks in the audience, the plague of wasps, the hunchback playing the organ…all on fire.

I pause for a moment as a ridiculous thought enters my head. I really wish I could say that Elvis erupted into song right now…maybe the one about "Burnin' Love." That would've seemed strangely appropriate in some morbid way. Just a bit of good-natured comic stupidity to lighten the mood. The hunchback could play the melody on the pipe organ. The drunks in the audience could dance and sing back-ups…

He's not singing, though. He's screaming his goddamn burning head off.

I run out the back. I'm on the dark cluttered streets of downtown Hell once again.

I think I just killed my wife today. I never even knew her name.

All artwork by Mike Lamb. See more at zazzle.com/dasempire.