“Where Cohesiveness and Validity Remain To Be Seen”

Let me begin by saying, “I love the smell of hate mail in the morning.” Opening hate mail in my inbox is like banging a dead slut: sure it’s cold and may contain viruses, but that’s just the way I like it. With all the recent columns regarding heated political powder-kegs like rising gas prices, immigration, and K-Fed’s latest music video, I’ve decided to do my part by contributing something worthy of pissing a few people off. Ah, satire, it’s the topical cream for the politically transmitted disease. Before adding my 3/5 on the issues, allow me to provide some information that may very well surprise you.

Outside of the dominant names in African-American politics like Jesse “The Rhyming Reverend” Jackson and Al “I’m Not Don King” Sharpton, people tend to wonder where black people fit in on the political spectrum—at least those who have discovered that we were capable of reading, writing, and voter fraudulence just like everyone else. This may come as a shocking development especially since the most vocal “political” opinions espoused by prominent black figures include Sean “The Artist Formerly Known as P. Diddy” Combs and Kanye “Some of My Best Friends are White People” West.

Now, since I’ve yet to drop an album since my middle school release entitled “Fuck the Hall Monitors,” one might say I’ve simply been out of the game too long to see the political significance of Diddy and Kanye. That simply isn’t true. For example, before Diddy was tapped to promote his 2004 youth-voter campaign, I helped create 50 Cent’s “Get Voting or Die Trying” initiative. 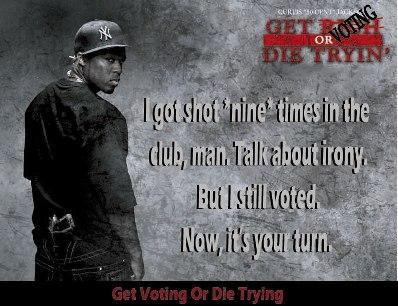 I may not be the first to say this, but if 50 got shot nine times to uphold his right to vote, the least Diddy could do is keep his promise and bust a cap in non-voters. However, as we all know, not every good idea makes the headlines. Sometimes the best contributions go unseen due to oversight or censorship. In fact, the line I originally wrote for Kanye after Katrina hit my hometown read, “George Bush does care about black people—he just doesn’t like them in that life-saving kind of way.” Again, here’s a clear sign of censorship in the face of what I felt was a bipartisan initiative.

Recently, the headlines have been filled with controversy over issues ranging from immigration to the energy crisis. Again, these issues aren’t any newer now than when someone first drew a map of where they thought the United States ended and the delicious borders of Taco Bell Headquarters…er…“Mexico” began. (Look everyone! It’s a black guy doing jokes about Mexicans! And I owe it all to Carlos Mencia’s School for Racial Stereotyping and Outmoded Humor.) So if you think for a moment that black people aren’t paying attention to hot-button issues… well… in many cases you’re right.

But for the purpose of this column, let’s just say we are. Hell, we should be watching. Considering most of our ancestors took an “all-expenses paid Atlantic cruise” here, it’s important to consider why other people risk their lives and face additional persecution merely for the banner we so proudly wave. Yes, part of that was a reference to slavery—but since I’m not getting a comedy special out of this, I’ll refrain from any more, despite my love of slavery jokes. Truly nothing is funnier than material read before a captive audience.

Here’s part of what gets me about proponents of tougher immigration penalties: some want people who aren’t actually citizens to face felony charges as if they were…only they still won’t grant them citizenship. Hey, at least we’re willing to share the American dream of becoming a fugitive in a foreign country. Granted, the government could then perform the deliciously evil act of granting citizenship followed by immediate imprisonment…but even that would be just…well, let’s just say I’m not the first to propose the plan.

Hell, if we kept locking immigrants up in prisons that grant them food, clothing, and shelter, we might as well change the entire country into a bed and breakfast. Maybe we could become an IHOP, in which case I’ll have the blueberry crepes, a churro, and some of whatever the Dutch contribute to international breakfast cuisine. I’d be okay with the plan as it would revitalize the pivotal post-binge drinking waffle house industry. God bless breakfast.

As far as the energy crisis is concerned, well…I’m surprised at how willing we are to take it up the ass. Sure, if we protested more and lubed often, we’d just be falling into the trap set by “Big (Anal) Oil” as they bend us over easy like a Sunday morning quickie. I’d like to thank Senator Frist (Asshole, TN) for his Congressional bill to aid Americans desperately in need of enough legal tender to wipe their asses with (hundred dollar bills now come in two-ply). Remember, Congress, if you’re going to fellate the oil companies, it’s only polite that you cup the balls.

But perhaps I’m not being fair, so I will offer some of my own recommendations for your critique. Let’s see…

1. Ladies and gentlemen, I’d like to consult the very best scientists to harness the energy potential of sucking. 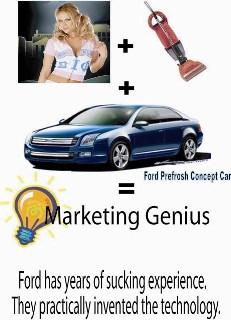 The Amish practically wrote the scroll on energy conservation. Who needs a car once we’ve brought back the horse-covered wagon? It’s like re-living the Oregon Trail only without the dysentery (optional). Let’s face it, going Amish is like going black: once you do, you’ll never look at a horse the same way ever again. I’ll ask a moment of silence for the imagery.

3. Lastly, I recommend that Congress pull their proverbial tongue out of the ass of the energy industry.

Rim jobs are reserved for interns and the occasional extramarital affair. Let’s get professional here, people. I can’t be the only person to stamp a co-worker’s ass “For Office Use Only” (I’m sure the ink is washable, Simonne).

Perhaps I don’t have the answers to our nation’s woes, but I’m sure President Bush would applaud my first initiative—that is, if he has his daughters’ futures in mind. It’s proof once again that I do this for the children.

Writer’s Note: I apologize in advance as I’ve been busy helping out in my hurricane-damaged neighborhood. I’ll make more with the funny next time. See you next week.