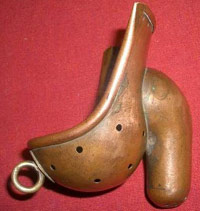 Day 7: The password seems impossible. I don't understand how computer hackers manage to break these things so easily. Also, I found out that it is illegal to get drunk and watch amateur fuck videos at your public library, and I also learned that librarians can throw powerful right hooks. My magazines have ripped and crumbled and now all I have is an issue of Good Housekeeping I stole from the library.

Desperation has set in. Yesterday I viciously masturbated to the cover of Better Homes and Gardens magazine.Day 10: After one week without visual stimulation, I have slipped into depression. All I can resort to is the lonely echo of my imagination, which is like trying to masturbate to flashbacks of your childhood. Granted, my third grade teacher was hot, but once I've mentally fucked her on her desk, the principal's desk, and the pitcher's mound in kickball, things get boring. The psychological stress of having to create my own cinema has resulted in migraines and fits of rage, the result of which required me to buy a new lava lamp.

Day 14: I have gone through every word in the dictionary in an attempt to break this code. I have calculated that since there are 26 letters in the alphabet and numbers 0-9, there are 1679616 possibilities for a four-letter word, 60466176 for a five-letter word, and 2176782336 possibilities for a six-letter word. At brute force, I should get the password within the next four months, or until carpel tunnel sets in. Meanwhile, I have reached the limits of my imagination and stopped wanking it altogether. Sort of like a hunger strike, only this time I take the risk of dying.

Day 20: Desperation has set in. Yesterday I viciously masturbated to the cover of Better Homes and Gardens magazine while rubbing it against the cover of Men's Health. It was the closest thing to sex I've seen in over 220 hours. I have forgotten the cry of a fake orgasm; I long for the sound of an over-exaggerated moan. I can feel insanity creeping up on my cold, untouched shaft.

Day 25: Yesterday I jacked it to the squirt of toothpaste on my toothbrush.

Day 35: I've replayed the fantasies in my head so many times they've become a maelstrom of tits, whipped cream, and lingerie. I've had mental threesomes with every cast member of The OC, along with the starting lineup of the L.A. Dodgers. My dick has become a wrinkled slab of flesh with the anatomical equivalence of an appendix.

Day 43: My testicles have swollen to the size of wiffle balls, and I now have the constant feeling that I'm about to erupt, but I never do. It's like being unable to sneeze, but out of your cock. I'm not even sure if I have a penis anymore; all God has blessed me with is a shriveled nub of tissue that occasionally lets me piss.

Day 45: After calling the neighbors and offering a trade, they have noted my desperation and decided to unlock their internet. Unfortunately, the exchange has cost me my Jimi Hendrix poster and ShamWow towels. We are going to mark this down as a victory though.