Now that Detroit is bankrupt, they can finally make Robocop a reality.

"Old Detroit has a cancer. That cancer is crime."
-The Old Man, from the totally awesome movie, Robocop

Robocop may soon be a real thing, you guys! The City of Detroit has decided they like Robocop so much they're making it a reality. The following bolded words are from The Detroit Free Press; the other words are from the most excited Robocop fan ever.

The City of Detroit is in final preparations to file for federal bankruptcy as early as Friday morning, several sources told the Free Press today.

If only Detroit had a few hundred Robocops then at least crime would go down and maybe some kind of people would come visit.If you never saw Robocop, you need to see Robocop. You know what? Don't even read the rest of this column until you've seen Robocop, which is a totally awesome movie about a nearly dead cop who is made into a robotic cop in the city of Detroit because in future dystopian Detroit no one wants to be a cop because crime is rampant and being a cop doesn't pay anything because the city went bankrupt and privatized all municipal functions like policing and when Bill Gates is in charge of policing you get robotic cops!

Of course, first Detroit has to go bankrupt.

The filing would begin a 30- to 90-day period that will determine whether the city is eligible for Chapter 9 protection and define how many claimants might compete for the limited settlement resources that Detroit has to offer. The bankruptcy petition would seek protection from creditors and unions who are renegotiating $18.5 billion in debt and other liabilities.

You see when assets get limited and a city can't afford to pay its bills then said city simply must do something to keep costs down and if that means turning policing into a private enterprise whereby they profit by developing weapons or stealing drug dealers' money or something then that's simply what must be done. But no cops are willing to risk their lives pension-free and if your cop pension is gone then you transfer out of Detroit and are replaced by a robotic cop. 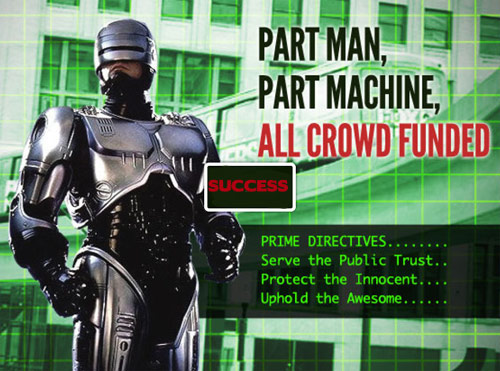 Detroit Emergency Manager Kevyn Orr, who in June released a plan to restructure the city's debt and obligations that would leave many creditors with much less than they are owed, has warned consistently that if negotiations hit an impasse, he would move quickly to seek bankruptcy protection.

Much like when Robocop moved quickly to kill Clarence Boddicker, who ended up being Eric's dad in That 70's Show but I digress because ROBOTIC COPS!

Orr's spokesman Bill Nowling would not confirm today that the filing is imminent. However, he said, "Pension boards, insurers, it's clear that if you're suing us, your response is ‘no.' We still have other creditors we continue to have meetings with, other stakeholders who are trying to find a solution here, because they recognize that, at the end of the day, we have to have a city that can provide basic services to its 700,000 residents."

Nowling then went on to add that if only Detroit had a few hundred Robocops then at least crime would go down and maybe he could get some kind of people to come visit this Godforsaken dystopian hell-scape he calls home.

Detroit's would be by far the largest municipal bankruptcy in U.S. history, in terms of the city's population of about 700,000 and the amount of its debts and liabilities, which Orr has said could be as high as $20 billion. Because of the stakes involved, and the impact on residents statewide, as well as 30,000 current and retired city workers and Detroit's ability to stay in business, the case could be precedent setting in the federal judiciary. It could also set an important trajectory for the way troubled cities nationwide settle their financial difficulties.

It's sad that Detroit suffers from such financial failures and it's a total shame that 30,000 city workers may have their pensions shredded to baco-bit sized bits but alas and unfortunately, this is just the price that we must pay to get a real life Robocop into the background of the story of our lives.

Bernstein noted that Orr has said repeatedly his office would "negotiate with creditors until and unless we find that the negotiations won't bear fruit, with the understanding that the city has a limited amount of time" for those talks.

Orr clearly has the prime directives to serve the public trust, protect the innocent, and uphold the law. And that's great but unfortunately for Orr he is just a human being and not a hybrid of human and robotic intelligence and capabilities.

We are so close to Robocop, you guys.

So close I can feel it.