I've been in the bartending business for about ten years. People ask me who the coolest people are, where the big tippers come from, and if I can tell if somebody is fun or not. The reality is, all people are different, even within their little groups. But the ultra-reality is that some people are fun and some aren't. Worst of all, some people think they're fun. After this tutorial though, if you're faced with the decision of hanging with either firemen, strippers, or Ultimate Fighters—you'll know who to choose.

So here goes, the uncool and cool folks to drink with in the bars, clubs, or pubs…

The sense of entitlement these snow urchins feel is beyond my cognitive capacity. Don't they get paid for doing something fun? Then quit being douches. Even most fratboys can't stand the obnoxious snowboarder attitude. Anti-Bonus Points: there is no grouping of guttural sounds more awful than snowboarder slang. "Braugh, let's nosh on some delis while we gaze at our pretties on our DVD."

By far the worst professional athletes to hang with. Not only do their tall, lanky bodies take up most of the space in the VIP booths that NBA stars simply MUST have, they're the loudest, most boisterous, and attention-hogging dipsticks I've ever seen. Most don't believe in tipping because they think us "lower people" feel honored to serve such brilliant athletic artists like the seventh man for the LA Clippers. The great thing is, most of them (especially Carmello Anthony) have about as much street cred as Hannah Montana, so you don't have to worry if you want to kick the crap out of them.

It's been written a million times: strippers are crazy. They feast on attention, drugs, and drama. Unless you want your night out to end up like a crazy cat-fight riot like "Melrose Place Meets Camp Crystal Lake," it's best to keep your relationship with strippers customer/consumer.

Every minute is like an episode of "What Not to Wear." Shut up already. 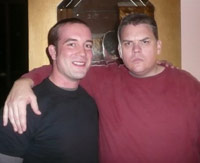 Now, I mean this as no disrespect to the Bravest. I'm incredibly glad there are people who like to fight backdrafts, mostly because I'm afraid of heights AND fire. I'd be a terrible firefighter because I think the world would be served well if most of humanity burnt to the ground. So I thank the men and women who charge into burning men, buildings, or forests. My problem with firefighters is that no matter what cool story you have, they have a cooler one. No matter how good looking you are, all they have to do is pull out a shirt with "FD" on the chest and women surround them. If you're not interested in chicks, firefighters are totally cool. Otherwise, you're night is going to be spent with their throwaway cooze.

No matter what level of government they run, whether it's Saint Mary's Central High School Student Council (my alma mater), or the mayor, or the presidency, all they talk about is work, policies, and the wacky stuff that goes on in the office (it's not really that wacky—more like excruciatingly boring). Even so, people in the bars run up to them asking them to insert or remove speed bumps in their area, outlaw black people, or write legislation that would put hand sanitizer stations on every public garbage can. Then there are the truly annoying politico groupies that want jobs…

These older men are looking for young tail. They think their few dance moves (resembling full-body Tourette's) are enough to pull in the ladies—and maybe a few gut bounces did pick up chicks back in the Mesozoic Era. Worst of all, a manther will advise you on all the things you should do to end up like him. You know, because everybody wants to be at a shitty nightclub in their late forties trying to find justification for existence.

You'd think with bands like Led Zeppelin, Jack Johnson, and Motley Crue that rock stars would be the coolest cats to booze with, but none of them are really as cool as they seem. Not even the Crue are as cool as the Crue. Most of the time they sit backstage updating their Facebook page. "Yay. We rocked in Boise. Off to West Doinker, Montana next." Either they're boring, or they've crossed the line from fun to pretty scary. Yeah, train wrecks are fun to watch, but not when they're jabbing syringes into veins hoping for death. Even more un-awesome are sober bands. "Heck yeah! What a great show! Now let's go backstage and pray!"

Since I worked as a police reporter and a bouncer I've hung out with cops more than most people my age—except for those of my friends dumb enough to go to prison. Most officers are regular hardworking joes, but here's a formula that should illustrate why off-duty cops are fun to hang with: Stories + Tasers = Good Times. Plus, most cops know when cops go on their shift change, so if you really want to start some havoc, they'll tell you when you can start Port-O-Potties on fire without being caught.

By far the most pleasant of all professional athletes (only if they shower and leave their pads at least a county away from you—few smells are as nasty as mildewy hockey pads). Mostly, these down-to-earth dudes just want to crack open some cheap beers and watch girls. They do all their fighting on the ice and leave all their bullshit on the team bus. On top of that, the Russian or Canadian babes adore them, so maybe you'll get some of the extras…

Contrary to popular belief, most UFC guys don't go around headbutting people and kicking the nuts of everybody not wearing an Affliction t-shirt. Most of them are really laidback, and usually because of their massive training and weight loss, their drinking tolerance is next to nothing. Best of all, chicks love them, and if you're hanging out with UFC guys, the girls assume you're a badass too. Which, you know, helps.

Who better to party with than a professional partier? Plus, they know everybody so they can score you great deals on drinks.

These older dames get only a few nights on the town to party, fuck young guys by the dozen, and party. They don't want to know your age, favorite color, or profession. They want a weiner in them as fast as possible. Since most dudes would rather bang somebody their age, a cougar will start buying drinks by the gallon for their young and stupid prey. If your buddy has a pound of ecstasy, cocaine, and weed along with a rented hot tub and a gaggle of strippers, and you know a cougar with a babysitter, rest assured the cougar is partying harder.

Access to the best drugs, and if you slip, trip, and break your neck, doctors know where to get the best drugs. Plus, after a few drinks they'll tell you which local celebrity's ass is covered in boils and needs to be lanced.

These dudes always know where to have the most fun and are always surrounded by beautiful people. Of course, if this is a particularly unpopular drug dealer, maybe you want to bring your Kevlar vest, because being shot isn't very cool.

They're in the same boat as firefighters and cops, but our country's military are in a completely different ocean. Every time I drink with my Armed Forces friends I end up in some crazy hijinx like trying to figure out what happens when you throw a flaming Jet Ski off the roof of a building, spraypainting a dog, or going whaling (hunting for fat chicks).

Sure they're self-loathing and foul, but they'll make you laugh. You have to put up with a lot of conversations like, "If you like comedy, never ever do stand-up" or, "Joining the cast of a sitcom is like putting your soul on an executioner's block." But who else will make you crack up about random things?

Alas, we're a dying breed, but you won't find a more wretched hive of scum and villainy than most newsrooms. Most of the editors and reporters I know are a blast to go out with, mostly because their jobs and paychecks suck so much, the only way they can live with themselves is by drowning their sorrows in a ton of booze.

Oh who am I kidding? Strippers rule to hang out with. It's like playing Russian Roulette. Will the exotic dancer put on a show? Or will she sell you to a Slovakian sex slave trader? Who knows?! It's an adventure!! If you wanted a safe night out, you'd play Scrabble with your mom. So keep the booze coming and find out if you wake up with both kidneys.

There you have it. Do you agree? Disagree? Did I miss a few groups? Leave a comment for the world to see (or ignore) your opinions.