Part 1 of 10 in a "Best Picture" dog/human conversational series.

Oscar season is here, and I thought I'd provide you with a little breakdown of the nominated films. In order to do so, I've enlisted the help of my roommate's dog, Luther Von HoldingHammer, an ornery German Shepherd who is just a bit outspoken. This was originally designed to be an "Ebert & Roeper" style television show, but we were unable to generate any interest in the pilot. The following is a transcript of the first part of the episode. 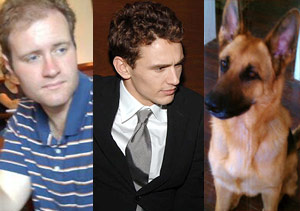 Charlie: The first film we're going to take a look at is Danny Boyle's 127 Hours, a haunting true story of a hiker literally trapped between a rock and a hard place, and the desperate measures he resorts to to survive.

Charlie: Erm, I believe my esteemed colleague is referring to Danny Masterson, who played Hyde in the popular television series. Rest assured he did NOT direct this film.

Luther: JAMES FRANCO IS AN ABSOLUTE DELIGHT! It almost made up for his hackneyed performance in Milk. Luther: Arrrooooo??!!! ("Really? Because that's not what it says here in my notes.")

(Leans over and shows Charlie his notes)

Charlie: Yeah, pretty sure that's just dirt and possibly some of your own feces smeared on a notecard. So if that says anything remotely relevant, I can't really tell.

Luther: Arrrooo?! ("Well, I know what I wrote, and that's what it says. My colleague and I may have to agree to disagree on who is actually responsible for the film, but what we CAN agree on is that it is a NON-STOP THRILL RIDE THAT WILL HAVE YOU ON THE EDGE OF YOUR SEAT! YOU'LL WANT TO SEE IT AGAIN, AND AGAIN, AND AGAIN!")

Charlie: I'm gonna have to stop you right there, buddy. While I will agree that the film was both a riveting and completely empathetic experience, the graphic, disturbing, and desperate nature of the film makes it kind of a one timer. It doesn't call for, nor necessitate, repeat viewings. 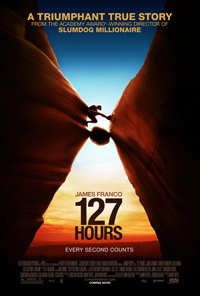 Luther: Arroo?! ("What about the part where he cuts his own arm off? Pretty hardcore. That alone was worth the price of admission.")

Charlie: Actually, in your own bizarre way, you've brought up an interesting criticism that calls the film's very existence into question: does the raw, visceral nature of that scene make the film a sort of "gimmick" picture? I mean, people are going to go into the theater knowing exactly what happens and spend most of the movie waiting for the part where they need to close their eyes. Did this film really need to be made, given that most people are aware of Aaron Ralston's harrowing ordeal and its gruesome outcome?

Luther: Arrrrooo???!!!! ("I don't know about any of that, but what I do know is that JAMES FRANCO IS AN ABSOLUTE DELIGHT! It almost made up for his hackneyed performance in Milk, a film that in and of itself was like watching a partial birth abortion unfold before your eyes.")

Charlie: Okay, that's both tasteless and disgusting, and literally makes almost no sense. Milk was an elegiac portrait of a bright, charismatic, genuine political figure whose life was cut short by another's self-loathing, and did a great deal to bring attention to the continued plight of the gay pride movement. What could possibly make you draw such a callous comparison?

Luther: Arrroooo???!! ("Look, whatever they want to do on their own time is their own business, just don't go rubbing it in my face with your Zimas and your Will and Grace‘s. I don't go around rubbing my heterosexuality in THEIR face, do I? It's such a double standard.")

Charlie: First of all, both of your references are horrendously outdated, and second, I also think you just DID rub your heterosexuality in their faces with your ignorant remarks. That's also exactly what the film was criticizing.

Luther: Arrooo?!!! ("Whatever, I'm edgy. ‘What's he gonna say next? I don't know, but better have the bleep button ready!' That's my shtick. And I guess we now know what side of the line you stand on, and now the rest of the world does, too.")

Charlie: (Sighs) I'm going to have to apologize for my partner here. His views are his and his alone, and not shared by myself or any other member of the staff. We're also woefully off topic. Getting back to the film, 127 Hours does manage to remain both engaging and powerful throughout its 90-minute runtime because of Boyle's skillful use of visual effects and distinctive, stylized direction, with lots of post-processing and genre-bending elements that allow the viewer to share Ralston's descent into delirium.

Luther: Arrrooo!!!!! ("I have to agree with you there, Charlie. The film truly shows you THE TRIUMPH OF THE HUMAN SPIRIT!")

Charlie: What are you doing there? Why do you keep doing that?

Luther: Arroooo?!! ("Movie studios watch for that shit. Say the right thing and they'll put it on the poster or the DVD or whatever. You gotta market yourself.")

Well, that's all the time we have for today, tune in next time for our review of Darren Aronofsky's mind-bender, Black Swan.

Luther: Aarrrooooo???!!! ("But you're not gonna let me show the lesbian scene…")

Charlie: That's not the point of the movie.

Charlie: I don't know how much longer I can do this.

Related
Let Me and the 10 Demons That Possess Me Host the Oscars
Desirae Smith
4 Glowing Reviews of My Grad School Basement Apartment
Jen Corrigan
Notes from the Underworld: Sisyphus’ Performance Review
Corey Pajka
Reviews of the Moonlight Bed and Breakfast and Its Owners’ Marital Implosion
Laura Chanoux
Resources

People asked me how I got my hands on my Grandma’s wealth when she passed away and I told them “where there’s a will, there’s a way.”