Plot lines and character development and not giant piles of shit, oh my!

Well, readers, if you don't live under a rock then I'm sure you have all read the 50 Shades sexcapades trilogy that has swept away not only our nation, but the entire fucking world. Or, if you're like me (someone who doesn't necessarily live under hard granite things but definitely doesn't partake in worldly news other than which famous exterminator is getting arrested for drug possession), then you probably know a guy named Andrei who sends you emails containing downloads of the 50 Shades of Retard-on-a-Stick and who also challenges you to a write-off over the entire debacle. 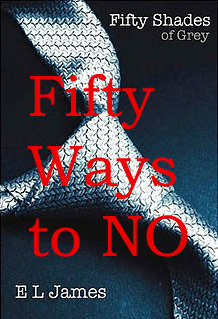 Now, because I think reading is important, and because I think the spread of knowledge is integral to a growing and thriving human race, I have decided to compile a list of 50 things you should read that are not 50 Shades of Grey and its sequels. If you love yourself in any way at all, readers, you will do this and you will do it now.

1. Everyone Poops by Taro Gomi

Despite my personal distaste for the word "poop," Gomi's book explains in less than 30 pages that because we all eat, we all poop, and that's totally cool. Some may argue that the book is plotless, but I will throw out my expert opinion and tell you that the universal act of defecation, in fact, brings the species of this planet together because you and I and that monkey flinging its feces at us are no more different from each other when it comes to shitting.

2. The Bible by A Bunch of Dudes Who Were Not God

Okay, so I may have not read the whole thing or its various incarnations, and I may have reshelved them, along with my equally devious sister, in the fiction section of Barnes and Noble, but at least The Bible has some action in it. Granted, maybe some people take some of those thrilling stories a little too seriously, but it has an apocalypse!

3. The Kama Sutra by Vatsyayana

50 Shades of Grey ain't got nothin' on The Kama Sutra. You kids all wanted erotica, right? Well, here you go – the original. Personally, I say invest in the fun, Americanized 1970s version with the hairy, bearded guy on every page. Talk about a hunk.

4. Eats, Shoots & Leaves: Why, Commas Really Do Make a Difference! by Lynne Truss and Bonnie Timmons

Now who doesn't love a title like that? Amiright? This wonderful book sits sandwiched between my "academic" collection, the books I chose not to return for some kind of profit after the semester was over, and my humor collection, the books that are super funny all the time. And everyone knows that hilarious grammatical errors belong in both those worlds.

Many of us were probably forced to read this in high school so we probably just read some of it and then called it good because we could cheat off that girl if we promised to be her best friend forever, but I say dive on in for a second try.

7. The Punch by John Feinstein

Remember in 1977 when Kermit Washington knocked out Rudy Tomjanovich during the Lakers v. Rockets game? John Feinstein is a great sports writer, and this book follows the lives of both Kermit and Rudy before the infamous punch and throughout the aftermath.

Just read anything by Sarah Vowell because she's fucking amazing. I love this collection because it involves a few of my favorite things: presidents, assassinations, american history, and road trips.

9. ACI Air Freight Directory by People You Should Know

Want to get a hold of a cartage agent in Louisville, KY? Curious about transit times from Boston to Los Angeles? Maybe you just want to school your n00b friends on airport codes? Then this is the book for you!

10. That's Blaxploitation!: Roots of the Baadasssss ‘Tude (Rated X by an All-Whyte Jury) by Darius James

I think the title speaks for itself.

11. The Naked Truth by Danielle Staub

My friend Vince is a gem especially after giving me this little masterpiece as a thoughtful birthday present. If you ever want to read a poorly written, highly narcissistic viewpoint sprinkled with daddy issues involving everything from clubbing to drug use to cooking with your daughters, then feel free to steal this from the Goodwill I donated it to.

You guys, it's about saving our environment! And there are pictures in it!

Because I want to die from clogged arteries, too.

Again, title speaks for itself.

I feel like I should just list a lot of this guy's books because they are funny, so here goes:

19. Warrior Wolf Women of the Wasteland

A very hip book from a very hip, hip man.

I am a lady who loves ridiculous challenges and A.J. Jacobs is my man. The dude read the Encyclopedia Britannica, okay?

24. Are You There God? It's Me, Margaret by Judy Blume

Some chick talks to god about her period and stuff.

Now, you could totally get the original, but I like to be prepared for the most extreme cases of disaster. Go big or go home, right? You know, if your home wasn't destroyed by a tornado or army of bears or something.

26. Any Emergency Flight Manuals on Any Flight by Fun Technical Writing People

It's good to always be prepared right? Personally, I'd rather practice bracing myself in the emergency water landing position than read another word by E.L. James.

Because it's Harry Fucking Potter.

28. Nsync: The Official Book by Nsync and K.M. Squires

"If you don't have this book yet, go get it!!" [email protected]

Who needs Rosetta Stone when you could have this?

Like Vowell and Mellick, read anything by Sedaris. In fact, gobble that shit up like it's Thanksgiving.

Political turmoil, a civil war, and some beautifully crafted sentences from one of the greatest essayists of our time? Yes please.

32. Goon: The True Story of an Unlikely Journey into Minor League Hockey by Adam Frattasio and Doug Smith

An outsider becomes one of the cool kids of minor league hockey and beats the crap out of people. I shouldn't have to convince you to read this.

34. The Zombie Survival Guide: Complete Protection from the Living Dead by Max Brooks

We all know the zombie apocalypse is going to happen. They don't make several movies about it for nothing.

Winnie Cooper wrote this book. Winnie. Cooper. Like the Spice Girls, she's empowering girls all over the world to stand up for themselves and face the world head on …through math!!

Quick AND dirty tips? What's not to love about a lady who knows her way around the English language?!

37. Understand Rap: Explanations of Confusing Rap Lyrics You and Your Grandma Can Understand by William Buckholz

Now you too can understand what it means when 50 Cent says he loves you like a fat kid loves cake.

In case you didn't know, now you do.

Okay, so maybe there are just a lot of muscle-y tan dudes posing with puppies, but at least the sentences that appear throughout this masterpiece are grammatically correct and don't have the phrase "inner goddess" anywhere.

Ever switch your language setting on Facebook to pirate mode and then were super confused by everything on your feed? Well now you don't have to be with the Pirate's Log!

41. The Bill Murray Handbook: Everything You Needed to Know About Bill Murray by Emily Smith

This should be on everyone's coffee table.

42. Death by Black Hole: And Other Cosmic Quandaries by Neil deGrasse Tyson

So, Tyson happens to be my fave astrophysicist. Have you ever seen this cat on the History channel? I could listen to him talk for hours (actually, I have) and his essays are awesome, too.

43. The Sparrow by Mary Doria Russell

Religion, politics, civil war, and aliens that rape humans. This was actually one of my favorite books in college, so thanks college!

Read anything by Hornby, but especially read this.

45. I Hope They Serve Beer in Hell by Tucker Max

This makes me giggle. A lot.

I think "Big Fucking Giant" has a better ring to it, but we can't have the kids walking around shouting "fucking" now can we, Roald?

48. Any Road Atlas by Atlas Makers

Personally, I enjoy being able to differentiate north from south and how to find my way back to an interstate if I decide to detour and drive past farms usually seen in horror movies where teens die.

49. I Like You: Hospitality Under the Influence by Amy Sedaris

I wish I could walk around with Amy Sedaris in my pocket.

Now, if you'd rather stay confined to your corn chip-riddled futon and read about how some twat can't get enough of some idiot's existence instead of reading about exotic, real places that are super awesome and you can do super awesome things in, then enjoy never fulfilling your unrealistic expectations, dying on that futon, and having cats eat your face.