The more things stay the same, the more politicians pretend to change them.

Another four years have passed. Years seem to move quicker over time but they don't. It only feels that way because the concept of time is an illusion designed to propagate the profit of the timepiece and calendar industries (lobbyists can get quite a bit done when everybody's crooked, and everybody's always crooked), and the more we expose ourselves to the illusion of time, the closer we get to understanding that we're already dead. 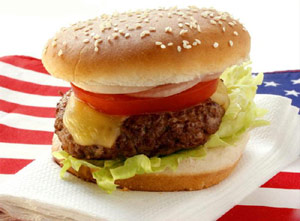 The more we understand about life, the faster years seem to go by, and the faster they seem to go by, the more we understand about life until, eventually, near what we fleetingly consider the ends of our lives, we understand completely and without a doubt that life has no starting or ending point, only restaurants that either do or do not allow rare hamburgers to be served. It's just one of those things, like a liability issue or a tax code. You get through it and you can't do much about it.

And that's kind of why we get a new president every four years. We, as a species that made up hours and days to provide ourselves with some kind of sense of order in an overcooked burger of a universe, want to believe that things change. And the people who want to make sure that their burgers are always perfect exploit our minds to make sure that we think said change occurs, when it really doesn't. Oh sure, the color of the skin of the guy in the White House may change, but skin color doesn't really eat a hamburger so it doesn't matter anyway.

But some things do matter every election year, no matter how little they ever change.

People respond to information the way girls respond to penises. They like a lot but give them too much and they run away screaming. In what we think was years ago but is really with us forever and also does not exist, a dude named Admiral Stockdale once shut off his hearing aid during an abortion debate because he didn't think fetus removal was a political issue. And regardless what you think about the subject, no government should ever have the power to tell people what families they can and cannot have. It's an inalienable thing and if we ever lose inalienable things then they cease to be inalienable and slopes get slippery and the next thing you know, not even presidents get to enjoy a good and tasty hamburger.

But still, abortion matters to people and it's very important to people to know where their leaders stand on an issue that literally should never be in the political arena of a country that founded its laws on individual rights. So we get to hear how candidates feel about abortion even though it doesn't matter how they feel about abortion. It's all meaningless but we as a nation have to pretend it isn't because babies are cute.

People don't like paying taxes so leaders try to convince people that they won't have to pay taxes. But people will always have to pay taxes as long as they allow themselves to be taxed. So everyone votes for no taxes after they drive their taxed car over taxed roads thanks to taxed gas to go to a taxed building to vote against ever being taxed for anything ever, which is stupid because governed people are always taxed. Heck, even their burgers are taxed.

But you see the government wasn't there to support them so they weren't supposed to be there another hundred years. So the dude named Barry didn't technically lie and the dude named Ryan wasn't technically wrong but fact checkers have to pick a side and actually conclude that there are such things as facts even though we all know better because the Brontosaurus doesn't exist anymore. Life is a big string of lies and the harder it gets to afford burgers, the more people have to lie to get beef. That's just the way the ketchup crumbles, after you forget to wash it off the table and it gets all hard and crusty.

4. Slogans Are a Thing

People respond to information the way girls respond to penises. They like a lot but give them too much and they run away screaming. That's why slogan makers make sure that no one gets information they can't handle. Which is why everyone is misinformed and most people are dupes. But hey, as the man says, "Sound bytes are our political right!" and "If it ain't easy to understand it sure better rhyme."

5. People Will Think They're Right

No one can be right about stuff that is not proven but this is a fast-paced world and being misinformed never stopped anyone from having an opinion. Heck, stuff being proven doesn't often stop said stuff from being considered wrong. For example, most people think that time is a real thing because they can't understand that living and dying might as well happen at once because every interval (regardless of its length) is determined to be over after it begins and therefore there really are no beginnings or ends. But even presented with that information, people will still complain about any restaurant that makes said people wait "too long" for their burgers. People are funny like that.

And so another bunch of lying liars will use someone else's money to try to get sucky people to put them in a position to pay back the companies that loaned said lying liars the money to get elected to said position and a whole bunch of sucky suckers will lie to themselves and call results progress because they all think that time is a thing when the truth is that everything has already happened to be over and that, when it's quality Grade A Beef, food poisoning from rare hamburgers almost never happens.

(Seriously, you can look it up.)

And so, on Election Day, when you go into that voter's booth to decide the fate of a politician whose fate has already been decided because time isn't real, I want you to remember the one thing that allowed this country to spend thirty years as the greatest country on Planet Earth: