Today in the News

Watering down the news so you don't have to.

The City of Chicago recently decided that their awful teachers can begin teaching their watered down lessons to stupid students who do a lousy job at everything.  Parents are reportedly just happy that they don't have to actively figure out what to do with their little snot rags who they worry may end up on drugs if not in school.  Clearly drugs and gangs never make an appearance in Chicago city schools. 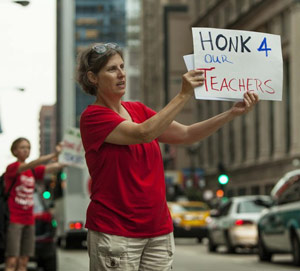 City of St. Louis police are trying to figure out who on the south side is murdering rabbits.  They're also trying to get Sgt. Scherzer to stop it with his Elmer Fudd impression.  They are having no luck either way but still feel better off than your average South City rabbit.

Mitt Romney said some more stuff that may have further alienated him from poor and working class Americans, which is pretty impressive when you consider where he started on that front.

France is closing its schools and embassies because one of its artists depicted Mohammed negatively in a cartoon and French people are wussies.

A chef slow cooked his wife.  Now, a lot of people have marital issues and I'm not here to say the best way to resolve them because everyone is different but I think I can say this without really walking into a moral gray area: "It is not nice to cook your wife, no matter how slow you do it."

The NHL decided that letting its players play hockey would be stupid for all involved and chose instead to hang out at Applebee's and like, flirt with the waitresses and stuff.  The NHL went on to say that hockey will always be there a couple years from now and anyway, it kind of wants to try Lacrosse.  Eventually, the NHL will have to grow up and take responsibility for playing hockey but there's no reason to rush anything in this day and age.  The NHL needs its time to grow.

A United States Navy Commander faked his own death to end an extramarital affair.  Now, a lot of people have marital issues and I'm not here to say the best way to resolve them because everyone is different but I think I can say this without really walking into a moral gray area: "Faking your death only works if you fake the whole world.  You can't just like, fake your death to your mistress and then be alive for your friend Stan.  Death doesn't work like that.  And frankly, neither does Stan."

Dude, how many times are Kelso and Jackie gonna try this?  It never works, guys.

Toronto Blue Jays shortstop Yunel Escobar was suspended three games for writing a slur against gays in Spanish on his eye black.  You know, not to get all old fashioned on you, but I miss the days when shortstops were suspended for writing gay slurs on their eye black in English.  This is, after all, America.  Even when it's Canada.

Some dude lied about having a genetic disease to get out of forty or so years of parenting.  As someone who once lied about a back problem simply to get out of helping an acquaintance move, I gotta say, "That's really getting the bang for your buck right there."

Arctic ice melted to an all-time low.  And I don't care how low it is, if you're in the arctic and you can't find ice, you're an idiot.

Have a news story, you'd like Today in the News to cover, please email it to [email protected].

And have an excellent day.