The lovable Winnie the Pooh is growing sharp fangs to open that honey jar next summer. In a recent interview, Tim Burton announced he will bring in his skills to direct a darker vision of the Hundred Acre Wood. Burton has updated many different children's stories such as Charlie and the Chocolate Factory, Sleepy Hollow, James and the Giant Peach and most recently Alice in Wonderland. 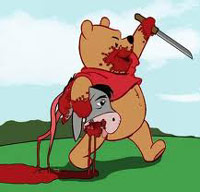 A studio exec who wishes not to be named stated, "We realized that the Winnie the Pooh franchise was a little dated. Where's the sex? The drugs? The violence? The creepy weird motherfucking crackheads that give kids nightmares? Then we called up a focus group, utilized some lunch time and got down to Hollywooding the fuck out of this faggy little kid's story. All of us agreed on one person: Tim Burton. This fucking guy, he's batting a thousand. I mean, he redid Planet of the Fucking Apes man. And it ruled! Honestly, Winnie the Pooh is fucking due for some changes."

And changes will abound. Rumors are that Winnie will be a rag doll looking bear, but black with a choke collar instead of his yellowish-coloring and trademark red t-shirt.

Burton fueled some of those rumors. "I was thinking the other day while I was in my castle, ‘Young girls just aren't locking themselves in the bathroom and cutting themselves to Winnie the Pooh.' Well, I want to change that. I believe A.A. Milne, the original author didn't want some Disney-fied bullshit story about a gay little bear. I think his vision was much darker and creepier. Kind of like watching a combination of a Marilyn Manson video and eye surgery." 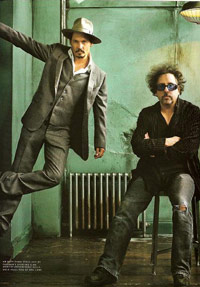 Per usual, Johnny Depp will star as Christopher Robin, the little boy who plays with Winnie The Pooh. When asked if he was too old for the role, Depp said, "You have to remember, this is Tim Burton's vision. He's never wrong about anything. And we've worked on so many great movies together. But honestly, not to sound like a dick or anything, but I'm pretty much the greatest actor in the world. If there was a movie about a blue whale who dreams of fucking the Statue of Liberty, I could play any part in that movie."

The story will center around Christopher Robin, a hard-drinking, tattooed, foppish private detective in Hundred Acre Wood Forest with nothing to lose, but a brand new case about missing honey pots and the theft of Rabbit's vegetables. Everything gets even crazier when a motorcycle-riding Siberian tiger rolls into town.

"I still need to find a spot for Helena Bonham Carter. She's like, the greatest actress in history," says Burton. "It doesn't matter that I'm married to her. She rocks. She was so good in that one movie one time." 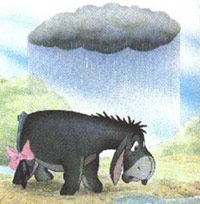 When asked if Burton will ever make another movie off an original idea, the famous director screamed, "Original?! I made an original movie off an original idea once. Did you see Alice in Wonderland?" Check out all the original special effects shit I did. That's fucking original. So guess what? Fuck you! Do you know how much my fucking movies make? Billions! It's all about the retarded little girls in love with goth shit and Jimmy Depp or whatever his fucking name is. I'm a fucking bajillionaire. Go ahead and watch your faggoty arthouse films if you like. But you won't. Because everybody loves my movies."

The new "Winnie the Pooh" is expected to have a budget of $750 million dollars. Mass suicide clubs are protesting the movie in Pittsburgh, London, and Tokyo.