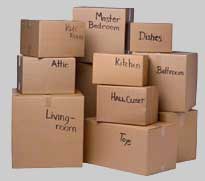 I am moving tomorrow morning. The movers are coming at 10am. If you are one of the 5 friends I've already talked to today, congratulations, you're right: I haven't started packing yet.
" />

I am moving tomorrow morning. The movers are coming at 10am. If you are one of the 5 friends I've already talked to today, congratulations, you're right: I haven't started packing yet.

So, because I'm feeling sort of giddy, and in order to fulfill my quota of irony for the day, you will now embark upon my packing experience WITH me tonight. Hey, listen, if Nate can run off and get a girlfriend, I can be giddy and verbose, okay? Hell, it could freeze over and I wouldn't even be surprised anymore.

6:15pm
After about 3 hours of regular work, it's time to put the keyboard down and get to business. Wait, I'm still typing. Shutup, this doesn't count. Are you really gonna talk to yourself like this all night? Probably, it's a diary kinda thing. I am an OCD organizational person, and the model of efficiency, so I don't anticipate hitting any major snags in my quest to box up my life tonight. Here we go, seeya in 30 minutes or so.

7:10pm
I can't figure out how to fold up the simplest chair in the world. It's from Target, and I'm pretty sure they only make things one level up in simplicity from Wal-Mart, which makes even the least intellectual of trailer trash feel somewhat empowered.

So far my loft is now starting to look more like a warehouse or even the department store it once was, with furniture and objects placed in categorized sections of the space. My friend Liz thinks I have too many tables, but I only count 4 so far. Is a desk a table?

7:30pm
I feel kind of guilty about this, but I'm using two big red tubs that have previously held both iced-down kegs and cans of beer during different parties, to pile a bunch of my clothes in. I should really find another use for these tubs. But now, if I smell like beer next time we go out, you'll know why. We probably won't go out though.

8:16pm
My mind is starting to go into an organizational frenzy, so it's time for a joke timeout.

What did the empty box say to the full box?
“I'm board. Wanna play cards?”
*Intense poker hand commences*
“AHHHH SHIT, I FOLD.”

I should buy stock in boxes. I hear there are a lot of movers and shakers out there.

8:36pm
I've just come to the realization that I need some additional packing supplies. Good thing this realization wasn't an hour and 10 minutes later. Now the question is, should I wear my Home Depot hat TO Home Depot? I think I will. Backwards. Coupled with the raggediest clothes I can find, so as to appear like an extremely sloppy employee. Let's hope I don't run into anyone I know. 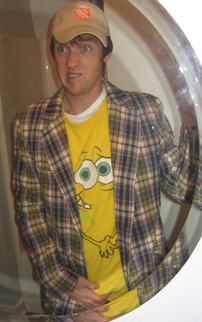 10:10pm
I'm back from Home Depot and Moe's (home of the greatest burritos invented in America). Fortunately, it was pouring rain outside, perfect conditions for loading cardboard boxes into my car. Because of the rain I'm assuming, there also weren't many people at Home Depot. So when I walked in it was about an 8:1 employee to customer ratio. Unfortunately, the old adage “quality over quantity” still seems to hold true. I went to the middle of the store and turned up the first aisle I saw employees in. They were cutting open and stocking supplies.

“Hi, can you tell me where the moving and packing supplies are?”

“Umm, well, they're right here.” The guy and girl turn to each other briefly and go back to work.

I realize I'm standing right next to all the packaging supplies: tape, drop cloths, other assortments of ALMOST what I needed. I felt sort of stupid for standing in the middle of the answer to my question. I looked around for boxes and bubble wrap. I only found bubble wrap pre-packaged with two rolls of tape. Clearly, variety packs are in the interest of the new-age consumer.

“Hmm, ok, where are the boxes? And do you have any bubble wrap just by itself?”

After a quick glance around she replies, “Well, this looks like the only bubble wrap we have. Jeff, do we have any boxes? For moving? ….No? …Yeah, I didn't think so. Umm, no, we don't carry any moving boxes.”

To which I immediately shot her a look that clearly said, “You are trying to pull the wool over my eyes. And it itches.” She just told me Home Depot has NO BOXES. Next thing you know McDonald's will tell me they've stopped carrying buns, and my stylist will attempt to cut my hair with safety scissors.

And that was that. I adjusted my Home Depot hat (which several employees had already given me baffled looks over, along with my outfit), and decided to walk around the store some more, just so I'd have a story when I came back to you here.

Good thing I did. Across the store, I stumbled upon a giant wall of moving boxes, in the middle of which sat a 10-foot deep shelf of bubble wrap–non-variety pack style. I pondered the odds of the previous 15 minutes, and figured them at 343,000:1. I should play the lottery more often.

Then I went to Moe's, ate my burrito, and purged in the bathroom. God my arms look fat.

12:59am
You didn't think this was going to be an early night did you? Good, because it's not. I plan on being up til at least 6am packing more shit. That's what you get for being an incredible procrastinator…and a vampire. So far I have 8 boxes packed. And that's most of the delicate shit like electronics that had to be bubble wrapped first. This is the point in the night equivalent to having fleshed out your entire outline and written the entire introduction to your research paper, grounded by a solid thesis. Everything from here is just manual labor following a set pattern. Kind of like how as your mom and I continue our affair, she knows exactly how to get to the hotel, what type of outfit to have on when I walk in the door, and how to pay for the room after I leave.

I'm starting to get annoyed with Yahoo Launchca–wait, nevermind, Stevie Wonder's “Part-Time Lover” just came on. DAMN MY STATION KNOWS ME WELL. This is my jam from 1st grade, around the time some red-headed slut bit my finger so hard I had to get stitches. Ever since then I've been partial to brunettes, though I did go through a pretty long blonde phase.

Random note: I'm going to NYC (yes, again) on Thursday and my good friend Tushar is hosting a party for me and Francisco called the Bro Back Mountain Party. I guess puns run in the circle. Should be a pretty gay time.

1:31am
Questionable things I've thrown away so far in the process of elimination:

2:42am
My progress is somehow slowing down as my mind goes into late-night abstract thought mode, causing me to look over items like photo albums before actually putting them into boxes. Is it sad that I fit all the books I own into one medium size box? More pathetic, I'm including all 4 phonebooks, and an oversized dictionary. But you already know I don't read.

3:07am
Trying to stack as many small boxes as possible inside a very large box is like playing a real-life game of Tetris. I'm waiting for the bottom row to disappear…

-A really loud and annoyingly awesome toy saxphone of regular sax size that makes different beat-box type jazz tunes at the touch of any of 10 buttons. Originally purchased at a half-price thrift store sale for $4 – $2 = $2.
-Two caricatures, one of me and one of Tushar, drawn in NYC by the shittiest Asian stencilist ever. Tushar made me carry both home on the plane. Thanks asshole. Worst $10 I've ever spent.
-Two pairs of tennis shoes I wore holes in the toes through playing tennis. I think this is a no-no for our building garbage chute, but will Salvation Army want them?
-Myself. 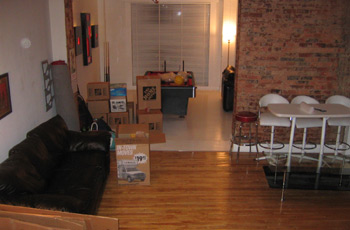 5:42am
I'm getting brain-tired, so it's coming down to visuals, folks. Sort of like the Hocus-Pocus in the Sunday comics.

In the picture below is one of the red keg tubs I mentioned earlier (not yet filled–maybe I'll put a keg in it and tell them to move it for no reason). You can also see the broken bar stool, which is just a seat now. I found it like that the morning after a party, so I guess I'll always wonder whether someone fell off of it when it happened. The candy cane column in the background is courtesy of Mikey before the PIC Prohibition Party. Not only can he write comedy, HE CAN HANG STREAMERS!! Unheard of skillset. And finally, take a close look at my computer screen: you're now looking at a blog within a blog within a blog. Creepy. 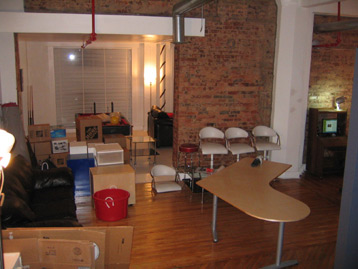 6:33am
That's it. Just over 12 hours of packing, writing about packing, and writing on the packing, it's time to get things moving. But first, I'm going to bed (alas, for only 3.5 hours). But hey, now you can say you know someone who pulled an all-nighter for packing. Ironically, I call it, thinking inside the box.

I try to be a good house guest, but I never know if I should leave the toilet seat up or down after I finish rummaging through the medicine cabinet.