Like most people who die young, Taveras died tragically, and it sucks. 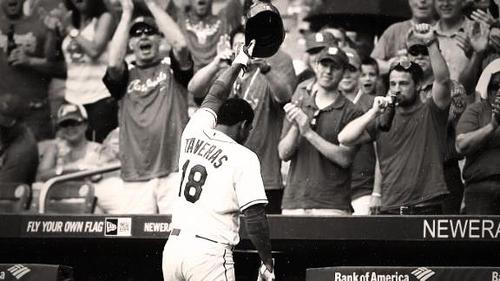 Like Nick Adenhart and Len Bias before him he was a stud prospect, the kind of ballplayer that gets you excited for his arrival before he arrives. In baseball, this is not all that common. Most professionals are not heralded from their teenage years. The competition is just too fierce, the changes in the game from high school to professional just too daunting. No one is a sure thing in baseball. Oscar Taveras was about as sure as it could come though. He was going to hit major league pitching. The only question was when.

His first hit was a homerun. In his last series, he tied an NLCS game with a homerun.

He went 3 for 7 with a homerun in the last post season, his only post season. He will never see another game again, post season or otherwise. He won't see another sunset, won't drink another beer, won't fall in love again, won't try the two for one dinner special at Fuzzy's fucking Tacos, won't… won't… won't.

Like former Cardinals pitcher Josh Hancock, he died in a car accident. Like most people who die young, he died tragically.

From what little I could tell from the comfort of my couch or in the seats at Busch Stadium, he was an exuberant young man who openly shared in the joys of his teammates. From what little I know, he was a loving son and good friend.

I was supposed to know much more.

I was fresh out of college when Albert Pujols came up. I'm watching Albert have an amazing career. I'm hoping he has an amazing life.

It was a few months ago when Oscar came up. I was prepared to watch Oscar have an amazing career. I didn't even think about what kind of life he would have.

Athletes' lives don't mean more than any other person's life, not in the literal sense. But when a young life dies, a long life gets cut short and everything that could have happened ceases to be. And when that young life is a promising prospect of your favorite baseball team, it hurts. Not because the team may not be as good without him and not because you need a dose of perspective. It hurts because you were prepared—you were prepared to take interest, to take part in the developing life of a total stranger.

And now you won't.

Spring will roll around again. Baseball will be played. New winners will arrive and thrive. And I will enjoy more than just watching them play. I will enjoy watching them grow up. I will enjoy them becoming a part of my life and with any luck I will live long enough to say goodbye to them as well. Like I did with Willie. Like I may one day do with Albert. And like I never got to do with Oscar.

Rejected Fighter Pilot Names for the New Pilots in “Top Gun: Maverick”
Gary Almeter
I Am Stepping Up to Run Garden Club Despite My Complete Lack of Gardening Knowledge
Sarah Totton
The Abyss Stared Back, and It Likes What It Saw
Miles-Erik Bell
Sir, I Am Not Pleasuring Myself to the Pin-up Girls Painted on the Side of the Warplanes, Sir
Robert Criss