My toenails are getting super long!

I haven't cut them in ages.  My cat came into my bedroom the other day, looked at my toenails and freaked out.  First, she hissed at them.  Then her ears went back and she hissed some more.  She started making these weird cat noises…looked like she was about to attack.  I was lying on my bed and didn't want to deal so I just shoved my feet under the covers to hide them.  My spooked cat finally calmed down but for the next two days after she wouldn't eat.  She just found a dark corner and stayed there.  Never moved and eventually died.

I wish I could do that to my brother Dwayne.  His girlfriend is Jamey.  She is supposed to be with me.  I have no idea what she see's in his dumb body.  Sometimes, I think maybe it's because she likes older guys.  Afterall, she's 17 and he's 28.  I hear them all the time in Dwayne's bedroom.  At first they always start off giggling.  Then it turns into Dwayne whispering "Come on baby…I can't wait forever" and she always replies with "I'm scared!".  She really sounds scared too.  Like someone has shown her a dead body and they tell her to touch it.  i wonder if Dwayne's penis looks like a dead body?  I'm going to find out and post about it later.  I will compare it to mine.

Jamey needs to know the truth.

Today, I shaved some hair off my dead cat's body and used the hair to make a fake moustache.  I've been trying to grow one for so long to impress Jamey but I just can't seem to grow facial hair.  I'm not sure if Dwayne is coming home today with her…but if they come home, I'll be ready with it glued on.  I have to be careful though, my brother can get extremely jealous.  He might want to fight me just to impress Jamey if he feels I'm looking way more mature then him.

We've only fought once because of her.  They came home one day and went straight to Dwayne's bedroom.  They hung out for hours up there and I was hiding under the bed the whole time!  They never found out!!  it was only later that night once Jamey had left, Dwayne and I were watching TV with mom and I still couldn't believe I didn't get busted.  I just had to tell Dwayne.  I was too excited to keep it a secret.  He got mad and we fought.  He kicked my ass.  Thank god Mom farted because that ended the fight – Dwayne and I just couldn't stop laughing.  Then my Mom flipped the channel over to ‘Blue Heaven', a movie of the week starring Molly Ringwald and the bad guy from Robocop:  It's about Molly Ringwald learning how to swim in the ocean taking lessons from the guy in robocop…they're having a good time but then he rapes her.

Below is a picture of my mom and my cat…who is now I guess is starring in a movie of the week called ‘Cat Heaven'!! 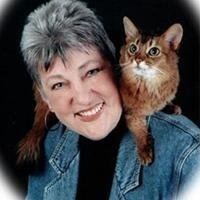 I want to write a novel about Schrödinger’s Cat, but I don’t know if there’s a story there or not.