I'm With You PETA 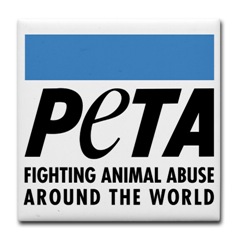 This morning I accidentally made myself throw up. I was brushing my teeth and tongue, getting a little carried away and enjoying it a little too much, when I accidentally forced the toothbrush head into the back of my throat, which caused me to throw up in the sink, which meant I had to clean the sink and brush my teeth again.

Fortunately, years of living with me have reinforced upon me the fact that I am an idiot (especially in the mornings) and I always allow a few minutes screw up time before work. As a result, I was not late.

I even had time to turn on the ESPN while I brushed a second time.

While I was enjoying my second round of teethe scrubbing that morning, ESPN revealed to me that Michael Vick had been indicted on charges of dog fighting. Apparently, a whole bunch of dead dog bodies were found on one of his properties. The indictment further stated the brutal ways in which many of these dogs were killed.

As a result of this news, racists everywhere are having a field day (in case you didn't know, Michael Vick is a black quarterback). And minorities are screaming conspiracy. And everyone in between is worried about the dogs.

I've never trusted a person that didn't like dogs. Dogs are loyal, loveable and gullible. They are the Gomer Pyles of the animal kingdom. And anyone who thinks that they should train dogs to be vicious killers deserves to be covered in frosting and thrown in a pit with Rosie O'Donnell, Rosanne Barr and a whole bunch of other aggressive fat chicks. Dogs are that cool.

Ordinarily, I don't really like PETA. It's not that I am not all for the ethical treatment of animals; it's just that, well, in this crazy world where people murder each other for reasons that even they don't understand, worrying about whether or not a hunk of veal or a stuffed goose once had a good life is (in my humble opinion) the practice of people with too much time on their hands. In short, you can't worry about every damn thing on the planet or you'll end up a very miserable person.

But dogs? well man, you don't mess with dogs.

So I'm glad PETA can stop worrying about whether or not my fried chicken deserved an entire range of grazing land before the greasy counter lady dropped it in a deep fryer. And maybe they can get a few of those paint-throwing crazies to lay off the fur-coated elite bitches of America for a few minutes. Because dogs are more important.

Now, maybe I'm biased. But the thing is, I've never met a chicken or a mink.

But I've been friends with every dog I've ever known.

Go get the bastards, PETA. For once, I got your back.