You Should Hear This Song

This Song robs me of breath. I grit my teeth without realizing I'm gritting them and find myself frantically searching for an inhaler. Even if I did have a few puffs to spare, they'd be gone before I made it past the 1-minute mark. This Song makes me dizzy, it's so awesome. Demi Moore would divorce Ashton and remarry him again, just to have This Song played at the wedding.

The word "feel" is This Song's job. People consider it a chiropractor to their lyrical backbone—a doctor of sorts, who couldn't tell you how to spell "PhD" to save its life.My play count column has reached 35 for This Song within an hour of downloading it. And it's 4+ minutes in length. (This Song makes impossible shit possible.) I wish I could create my own genre in iTunes; I would put This Song under an independent label better known to music fans as "ABSOLUTELY FUCKING AMAZING." It would be the only song in its genre. People would buy billions. The music business would undergo a sort of Avatar-like boost in popularity, but eventually get so big that the entire movie industry would be considered "just a fad." All thanks to This Song.

If This Song were a fashion model, she'd be the skinniest, most attractive model in show-biz. A healthy skinny though, as in "sexy skinny" and not "part of a tree branch skinny." This Song's strides would be one with her stilettos. Her legs would extend and collapse at perfect angles when on the runway. Cameramen who gathered in mobs beneath her feet would drop to their knees, surrendering helplessly to her soft, yet difficult outer beauty. "Maybe she was born with it" would be the joke of the century.

I think my imagination and This Song just fell in love. It puts me in a world of blurry trance, a fantasy land with side-effects consisting of constant movement and rapid heartbeat. This Song holds me hostage to its positive vibes. The bass on it could re-invent water. The treble holds enough power to turn Obama Republican and Michael black again. AC/DC would be lucky to have This Song even consider touring the world with them, because worldwide tours are against This Song's religion. That, along with the whole concept of subscribing to a religion in general. 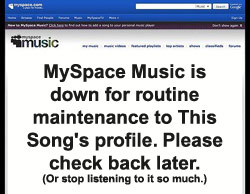 This Song's MySpace page would be set to private due to the amount of followers it would receive on a daily basis. It would probably freeze the Internet on a global level if it did end up switching to public. In fact, This Song puts Google to death simply by profile views. You couldn't count how many hits it had in the first hour of live streaming if you combined all the hands in America and multiplied that number by twenty. ("Shit that's a lot, maaaan.") You bet yer ass that's a lot.

This Song is so incredibly hard to stop listening to. Just thinking about it gives me a nosebleed and causes me to forget how to spell my own name. I start to fade out from reality but come back again, solely to hear the rest of it. I'm fascinated by how many high and low parts This Song consists of. Techno music has a few here and there, but This Song is a high and lows pimp. It's so well-written, my five senses are having a tea party inside my head, but instead of tea, they've got Starbursts and Red Bull. My tastebuds are moving with the backbone of This Song's chorus. Like bundles of tiny red Pop Rocks, they bounce in beelines on the surface of my tongue. This Song always laughs with me when my mouth goes numb. A manly laugh too—the laugh you never seem to hear anymore; the loud and hearty chuckle uttered by a confident man who could give a rip less what people think of his cackle, sometimes even making fun of himself.

This Song could randomly walk through a fancy night club in downtown L. A. and be asked to DJ within thirty seconds of entering the place. The disc jockey would stop his music and the dance floor would go silent. "No, no, I liked what you were spinnin'. I wanna hear you spin." This Song would go on a marathon of modesty and excuses before crossing the finish line of temptation. It couldn't help it, music was in its blood. (Ahhh, the irony.) This Song would always end up spinning the best shit, too, never settling for a boring show. Its fingertips would caress the record in such an exotic way, it'd make you believe there was a zoo of instruments inside the vinyl itself. You just couldn't see them. You had to feel. 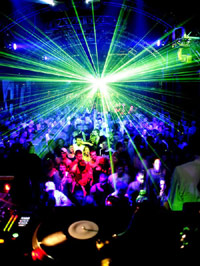 This Song spins itself, but it also spins everything you loved before it came along, because This Song is way too modest.The word "feel" is This Song's job. People consider it a chiropractor to their lyrical backbone—a doctor of sorts, who couldn't tell you how to spell "PhD" to save its life, but could lay down a throwback track so hardcore that a sad old deaf man would drop his cane and start dancing the Funky Chicken to it. Then This Song would turn Grandpa's little walking stick into a cluster of speakers and turntables and Grandpa into a damn good DJ. The old man would mix for hours, hypnotized by the way the black record brushed gently against the soles of his skin. He would be alive again, revived by the therapy of sound. This Song would even coin a name for its treatment: "stimulation of the music muscles." Music memory. The art of finding one's self between the crosshairs of a good beat and an even better baseline. Getting lost in tempos, but refusing the map. The Lewis and Clark of creativity. And boy does This Song like to be creative.

This Song's lyrics are so intense they would force Santa into anorexia. (Pssst, it doesn't have any lyrics.) He would fire all his little elves and replace them with bald midgets who whistle portions of Beatles' songs when they worked. This Song would be their Christmas theme song, even though it had absolutely nothing to do with the holidays. It didn't have to. The pure brilliance of its inner beauty and outer details were enough for it to replace the national anthem. The "Star Spangled Banner" would be a thing of the past, completely unrecognizable to younger generations.

If This Song decided to move to South Africa, its entire fanbase would move with it. Later on in life, it would write a book about the adaptation to African culture. The book would be titled "Caucasian Invasion" and would put Mark Twain to shame. It would be considered "too controversial" to be sold in Walmart. When This Song heard about the boycott from Wally World, it was so frustrated that it bought the entire Walmart franchise, shut it down, fired all the workers, and opened it back up again. Only this time Wally World was a massive chain of Rollerblading rinks with free admission.

People would travel from all over the world to bask in This Song's success. Little kids consider This Song to be their idol. They want to be just like it. Parents would even name their children after cities This Song's Rollerblading rinks were in. It always has a way of making people smile, too. No one can understand how outstanding it makes them feel, it just does. (There's that "feel" word again.) The addiction to emotion is way too incredible to pass up. Every emotion is stimulated when listening to This Song. Sad, happy, mad, funny. You name it, This Song stimulates it. I'm not even sure if it should be called a song. The offspring of Wonder Woman and God himself would be more in the ballpark. (Or maybe Matt Bouldin; that guy's a stud. A very attractive, tan stud.)

It's almost intangible how talented This Song is. When it was born, it came out wearing bright green aviators and had a Puerto Rican cigar perched between its perfect apple-red lips. It weighed fifteen pounds and spoke seven different languages, primarily Italian. Over the years, This Song would lose its accent, but never its pride. Cooking up killer spaghetti and lasagna dishes for hungry rollerskaters would be its specialty. Right behind being the best tune in the history of the world. "No big deal" it would say, confidence and poise behind every word. "I can't explain it. I guess it just runs in my blood."

Related
Welcome to Our World Cup Party Where We Know Very Much About This Sport
Lucy Huber
Thank You for Rescuing Me From This Trash Can I’ve Stuffed Myself Into to Write a Novel
Lauren Tousignant
I Think I’m Going to Start Working Out Again, Just as Soon as Someone Pries Me Out of This Tube Slide
Ram Ray
Resources