Why 80's Rom-Coms are the Greatest Film Genre

Make your next Netflix watch a sure thing (starring John Cusack).

If you've never seen The Sure Thing starring John Cusack, you're missing out on what I consider to be the preeminent 1980's, college-aged, sex-driven rom-com. I finally watched this breathtaking piece of cinema this Sunday night. I expected to feel comfortable, giddy, and somewhat nostalgic for the decade of my birth but very little actual emotional and psychological development. Well, people, I got slightly more than that.

I can say I certainly found a bit more respect for JC (that's John Cusack, not Jesus Christ—not that I do or do not have respect for Jesus Christ, it's just that I don't see how this particular film would in any way alter my perception of, or level of respect for, Jesus Christ), and I can say that I have just begun to tap quite possibly the greatest film genre there is.

Let's take a few notes on why the late-teen/college-aged, sex romp, 1980's rom-com is the epitome of excellence. (I base this solely on my recent viewing of The Sure Thing, along with my random preconceptions of what other films in this genre might be like.)

1. The protagonist is always quirky and witty, but generally unromantic.

The guy can hold a conversation and make fantastic observations, but when it comes to making out with this dude, women shy away. He's got a lot to say, a great deal of insight, and he's quite funny, but he can't seem to get the obvious female lead…until… 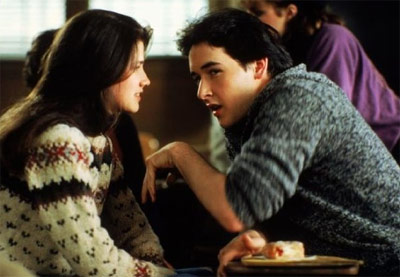 2. The protagonist always gets the girl you assume he should.

This genre doesn't pull any punches. Filmmakers back in the 80's knew that when the audience bought tickets to a film (they were a nickel back then), they expected to see what they paid for. The guy that you root for gets with the girl you root for. There were no attempts at trying to surprise people, because people are lazy and really love a happy ending. Surprising films challenge us, and in this economy, who wants more challenges? Let me see John Cusack make-out with that hot nerd from English class. Don't make the journey too easy, but make sure I don't ever feel too uncomfortable.

This is my favorite cliché of the genre; so much so that I wish it would make a comeback with the same magnitude of boyfriend lameness. These days, filmmakers try to add depth to their lame boyfriend characters by providing background into why they might behave a certain way (overly aggressive, ridiculously conservative, obnoxiously douchey). In the 80's, the lame boyfriend sucked so bad for no apparent reason that there was no way the female lead would even consider being with him. In The Sure Thing, the boyfriend is so lamely conservative one might find it hard to believe he is anywhere near college-aged. That's perfect. I don't want to sympathize with that lame boyfriend. My money's on Cusack, because he's on the cover, he's the guy I've been following for the whole movie, and he's more than one-dimensional. I like the odds largely skewed in my favor. 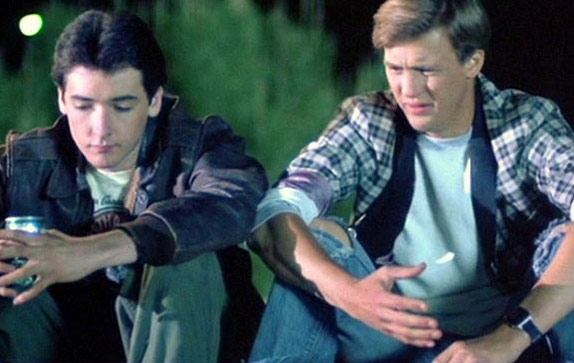 "Like, high school girls, ya know bro? What's up with that? And why do I always get holes in my jeans and have to buy new ones?"

4. The Super Cool and Gregarious Best Friend always breathes some life into things.

The super cool best friend is a great character. He could never be the protagonist because things are too easy for him. Whenever he meets girls he knows he kisses their cheeks and sexually harasses them casually ("Hey Tiffany, you sexy piece, how have I not taken you to bed!"). This is the attitude I like in a super cool friend. He'll high-five the protagonist, throw him a beer, and get straight in to talking about getting his friend some sweet 80's sex (a very notable cool best friend is "Styles" from Teen Wolf, perhaps the quintessential cool friend). You aren't quite sure why the super cool best friend enjoys hanging out with the protagonist over other people, because he has no problem making much cooler friends, but this is part of why he's so lovable. This dude is also possibly an alcoholic.

These days, male leads better look like Ryan Reynolds if they want to bag a leading lady. Even I'm jaded in that sense. If the dude on screen isn't ripped to shreds, I don't care much for the casting. However, in the 80's, the "Michael Cera" body type was clearly the norm. Even the "hot dudes" in 80's rom-coms weren't training too hard to maintain their physiques. At most they probably jogged or did aerobics in high socks and headbands (or was that women who did that?), but they weren't spending 16 weeks with a personal trainer and nutritionist to play some random dude who happens to make-out with a hot chick.

In The Sure Thing, a girl makes note of John Cusack's character's "cute butt." First of all, what a classic 80's thing to say, "cute butt." We barely have that tact anymore, and it actually feels awkward typing the phrase "cute butt." Anyway, this line was followed up by a closer look in Cusack's direction, which pretty much revealed no ass whatsoever. I doubt the statement was meant as some primitive form of irony, because modern irony wasn't invented until 1993, so this was an actual display of Cusack's ass, in an attempt to highlight its "cuteness." Well, I don't know much about dude butt, but I can assure you that very little about this could be deemed "cute," or anything for that matter besides lame. I like that. 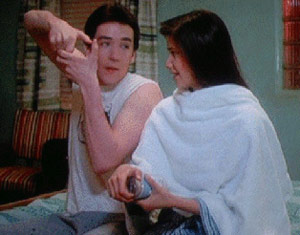 "It's kinda shaped like this, but trust me, that whole ‘square peg in a round hole' thing works a LOT better than you think."

The 1980's are certainly not my favorite decade, but for me there is a goldmine of an untapped cinematic genre. I will be slowly perusing through the classics (hopefully more Cusack) in search of more elements. As with any film genre, this too is not without its outliers I'm sure. The five key points detailed here are merely observations I've made from a lifetime (if by lifetime I mean one Sunday night, ever: which I do) of watching 80's college-aged rom-coms, and there are plenty of other points I'm sure I've missed. Next time you sit down to an 80's movie, make sure it's as cliché and easily digested as The Sure Thing. What's the point in watching a movie that tests you in any profound way?

More Like This
The Trolley Problem, Interpreted by Notable Film Directors
Brian Boone
Other Movies Based on Hyper-Literal Interpretations of ’80s Pop Songs
Scotty Goldberg
A Slate of Upcoming Films From the Producers Who Brought You “Long Shot”
Megan McMurtry
Resources