It's a near certainty you're guilty of at least one annoying habit.

In my growing collection of Internet-based woes, I have made the unfortunate mistake of accepting friend requests from people that I went to high school with and with whom I hardly talked. I had little reason to believe them to be interesting at school so, accordingly, their Facebook pages and news alerts are of equally little interest to me. I'm not talking about Farmville and crap like that. Everybody needs a pastime, I get it. But the actual words that people cobble together to represent themselves have begun to drive me nuts.

I have actually begun hiding people entirely from my news feed due to the following habits, all of which are both real and recent sightings on my homepage. See which one you are… 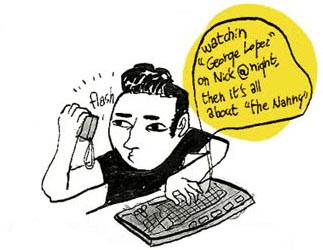 The most common and well-known, this person documents the details of their life as though they're in the middle of a scientific experiment that promises to save the world from certain destruction and every detail counts. Take the guy above for example. No need to embellish on this person; we all know someone like this, and if you don't, it's you.

This person constantly posts little aphorisms about the unrelenting love of Christ and how we're all selfish bastards for not acknowledging it. I know too many of these people and I have begun to steadily block them at every turn so that I'm not faced by the constant nagging they keep up. If it's not a direct quote from the Bible it's something like, “Write your plans in pencil and let God have the eraser,” or, “We were created to glorify God.” Oh give me a break and proselytize somewhere else, please. I'd like to go to Hell in peace, if you don't mind.

Akin to the Jesus Freak in that the main content of the updates tend to be aphorisms and quotes of some sort, however, this one is so full of him/herself that they can't make any room for baby Jesus, the Virgin Mary or footprints in the sand. They have to take clever or important statements and belittle them by adding personal comments. Of all the status update sins, this I have committed the most, but even I get tired of my douchiness after a while and write something Twitter-worthy based on the current product I'm consuming in order to cancel out the smug. 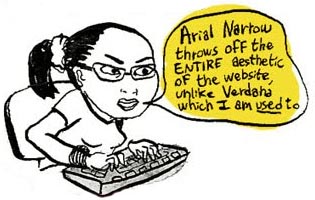 This is the person who FREAKS THE FUCK OUT if Facebook changes the default font of the website, complaining that Arial Narrow throws off the entire aesthetic of the website, unlike Verdana, which is what they're used to and—FUCK OFF! They are constantly joining groups that allow you to “Change your profile's color” even though I have yet to see a neon yellow profile, and they always, without fail, demand that Facebook change its homepage back to the one they were bitching about five months ago. Fuck. Shut up, get off the fucking computer, open the door: EXPLORE. There's a whole wide customizable world outside where you don't have to bitch about pixels on a screen any more.

This person's updates all have to do with the 8 pages he/she became a fan of and the 10 groups he/she joined and the 12 events he/she is attending. There's a person on my front page who became a fan of 22 different pages in one sitting. On Valentine's Day. In that case, I couldn't be mad. I allowed the notifications to remain unhidden in order to stand witness to the suicide-prevention capabilities of Facebook. But still… 22. I didn't even know there were that many things to be fans OF on Facebook. 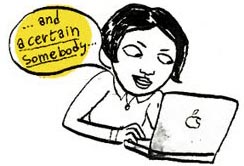 This person always mentions “a certain somebody” in their status JUST LIKE THAT. With snide and widely thrown comments splayed all over the front page just for the attention, these people make me realize that for all the good it's done for the world, maybe someone should just turn off the Internet anyway. 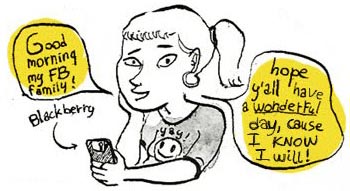 This person inevitably wakes up and updates their status from their Blackberry* greeting everyone and saying what a lovely morning it is. Normally they also mention who or what isn't going to get them down and how they feel that the stars are aligning for them this day, week, month or—in December and January—year. Here we usually have some overlap into the Jesus Freak category as well. For example: ” Good morning, my FB family.. Hope all is well.. Have a BLESS DAY I know I will…” And from the same person on another day we see this: “Good Morning…… My FB, hope yall had a WONDERFUL weekend cause I know I did…..” which indicates that they “know” a lot about the things that did or will happen to them and are pretty certain about their occurrence and that, you know, it happened…

What allows these Affirmation Addicts to get away with their antics is the over-powering scent of Low Self-Esteem that clouds their every utterance. But really, when you lean a little bit closer, just like Outkast's roses you'll see that they're really full of poo, poo, poo (hehe, I had to, sorry). It's all just thinly-veiled narcissism packaged in an acceptable format reminiscent of the “Don't I look horrible in this color?” or the famous “Does this make me look fat?” questions that not only elicit discomfort but also pleasing responses of “Of course not… you look great!” And if you don't think these people are self-involved, the next time you see a self-affirming status update, look at who “Likes” it. It's them, isn't it? They liked their own status, didn't they? It's okay. No “I told you so's” necessary. We all lose in this situation.

Everything he/she feels needs to be on display for the world to “Like” and “Comment” on because how the fuck else is one supposed to deal with emotions? Actually sit and think? FUCK NO! Emotions are there for us to bottle into shallow, semi-witty phrases and then publish.

Oh boy. And it's always so terrible…

So, Internet readers, which one are you?

A friend told me he was about to come into a large sum of money, and I asked, “What ever happened to socks?”