The existential apathy of hypothetical pointlessness.

What if you could be anyone in the world starting now other than your cool self? Who would you want to be? Would it someone you are jealousy of? Desirous of? Confused by? Fixated on? What if you wanted to be me? That would be weird. What if I wanted to be you?

What if you could climb Mount Everest this afternoon with your bare hands? Would you do it? Would you want to? Why or why not? Would you attempt this knowing you were probably going to fall and die, freeze and die, or starve and die? Would any of this matter to anyone anywhere? What if the answer is no? Go do it anyway, I say.

How similar is Points in Case to McDonald's? What if McDonald's stopped serving French fries? In any case, what's your point?What if you asked yourself a multitude of "what if" questions right now? How would you feel about that? What if "what if" questions did not exist? Would the words and "what" and "if" cease to exist or just the question "what if"? What if semantics died? Would anyone attend the funeral?

What if instead of a human heart you had a nectarine's heart? Would this concern you? Would you have open heart surgery to replace your nectarine heart with a human heart? Is there a doctor who knows how to do this? Is that doctor a quack job? How good are his hands?

What if you took the SAT right now? Would you feel nervous? Would you refuse? Would you do better on the math or verbal section? Would anyone care how you scored? How much money would you pay your psychiatrist to make you feel better for scoring lower than the national average? Would the psychiatrist tell you he scored higher than you? Would it bother you or your mother if he did? What if you mother dated your psychiatrist and they made fun of your SAT score when you weren't around?

What if you are a woman and, an hour from now, you became a man? Would you want to punch somebody for no reason? Would you be more belligerent? Would you be less concerned with social etiquette? Would you read books about manhood? Would your girlfriend hate you? 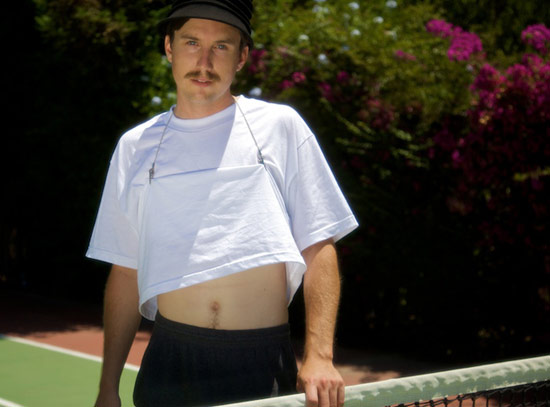 What if you're just somewhere in between a man and a woman? Would you hedge your bets or fully commit to one?

What if time stood still for 2 hours and 45 minutes starting now? Ready, go. Would time look like a Macy's mannequin? Would time become less of an abstraction and take on more human qualities such as bad posture and dispassionate acceptance of excessive traffic laws?

What if John Smith was mad because he had such a common name? What if besides him there were 689 million other John Smiths, 92% of which lived in the United States, 6% in Ireland, and 2% in the rest of the world? Would John care as much as you do about this? If you cared more than him, would that bother you? Would you bother asking yourself this? What if John Smith was the most average of all the John Smiths? What if on the SAT his score placed him precisely at the national average. Would John have answered the question on the test about the law of averages correctly? How average is average on average? Is average relative or precise? Does John have any idea how average he really is or is he oblivious? What if Joe was not average? How wild would that be? Take an average and divide by John.

What if Germans and Russian and Italians were actually Lithuanians and Peruvians and Jordanians? Would anyone be confused? Assume a few people would be. Would Wikipedia.org provide a simple explanation and would it be truthful? If you Googled Germans, would you get nothing but Peruvian ballads? Does this mean a bear never goes in the woods?

What if tomorrow you woke up and were a bear?

Would you go in the woods? If you did, what if nobody was happy about it?

What if you didn't care?

Related
What Did You Do This Summer?
Reese Cassard
Quiz: What Have You Done With My Amulet, Boy?
Cody Ziler
All Hail Aegeus II, the New Vermin Overlord of What Used to Be My Apartment
Nick Brigis
Resources