Trump vs. America: The Boxing Match of the Century

Tonight, the most anticipated boxing match of the past century; for the thousands in attendance and the millions, indeed billions watching from around the world, from the capital city of America, Washington DC, let's get ready to rumble! 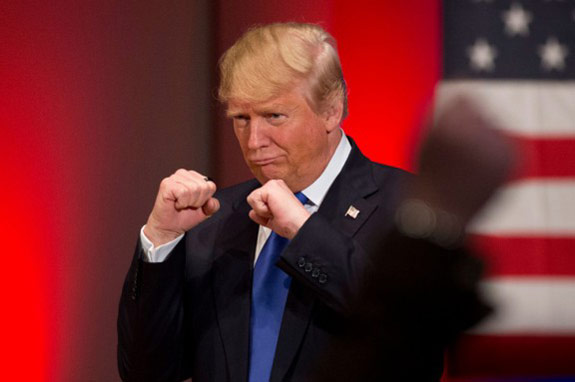 In the left corner, weighing in at 225 pounds, the real estate tycoon, the guy who bankrupted three businesses, the star of The Apprentice, the con man who convinced the Republican Party and half the nation he gives a damn about them, the new P.T. Barnum, folks, let's hear it for Donald J. Trump!

And in the right corner, weighing in at 50 trillion, the native land, from sea to shining sea, all fifty states, from the Rocky Mountains to the Gulf Coast, from the Pacific Northwest to New York City, our great home, our heritage, the land our ancestors died to defend; the land, true, we stole from the Native Americans, but a land that, regardless, at least in theory, is democratic; give it up, for the one, the only, United States of America.

Referee: "All right you two. I know you don't like each other. In fact, I know your values are nearly oppositional. But let's have a clean fight okay. Keep it above the belt."

Donald Trump is ducking and jiving; he's moving left, darting right; he looks remarkably nimble; the media doesn't know what to make of him; the country is dumbfounded, a left jab, a right uppercut, Trump is hurting the US; he's making it bleed, this could be a TKO; America is stunned; it's against the ropes; it's bleeding out both eyes; but Trump keeps working the US into the corner.

The US is down! The US has been knocked out!

The US is back up.

And down it goes again! Luckily, it was saved by the bell.

The US lands a couple of jabs; Trump is a racist—jab; Trump is a misogynist—jab; Trump thinks Mexicans are rapists—jab; Trump said McCain is not a war hero because he was captured—jab—jab—jab; but what's this?—Trump is using all this to his advantage; it's been a ruse; America is up against the ropes and Trump is punishing her; he lands the body blows; the jabs to the face; uppercut; uppercut again.

The US is hurt, she goes down; blinding white light; Trump is celebrating; his team is reattaching his toupee to his head as we speak.

Trump asks for America's birth certificate and she goes down again.

Saved by the bell once again. Amazing! What are the odds?

The US is getting pissed. SuperPacs have been injected into her biceps. She is tired of being played for a fool. Trump, meanwhile, is being coached in his corner by Sarah Palin, and, what's this—a new addition—his old opponent Chris Christie.

The contenders are sparring now at the center, each studying the other, and—look out—America trips Trump up; she questions his judgment—jab; she says he's not a real conservative—jab; she catches him in a dozen lies (with the help of Politico)—body blow; he's stunned; a left, a right, he's against the ropes; she's not gonna let him bludgeon her anymore; justice will prevail; equality will prevail; America will remain a safe, reasonable place.

This is intense; he's backed America against the ropes and now, in a stunning turn of events, America is down; America is down again. But, amazingly, she is saved by the bell a third time.

Chants of "USSR" ring through the crowd! America is crying and whimpering and pleading with the powers in her corner, the working-class denizens, heads of the school system, and our war veterans to give up; but her trainers refuse; instead they demand the refs disqualify Trump for fighting dirty. They even talk of a "contested convention." But it's to no avail.

The battle continues, Trump, now, punching way below the belt. Moveon.org protesters rush into the ring, Trump shouts "get them out," and, like that, security drags these supporters away, the crowd cursing and spitting on the infiltrators.

The fight continues, and, now, propelled by the atmospheric fervor, Trump seems unstoppable: left right left right…POW.  America is down. This is an unprecedented assault!

Trump is gloating. His team is putting his toupee into its typical combover.

He seems to feel he's "a winner" and he lets the crowd know it. Paparazzi cover every word.

More hoots and hollers, signs waving unanimously. The crowd salutes him. They pledge their will to him. Swear to follow him to hell if necessary. He is their demagogue.

Announcer: "The winner and new leader of the free world, Donald J. Trump!"

The crowd erupts into a fury.

Slowly, shamefully, with lowered heads, the few sane audience member looks at each other as if to say "huh?" Then nervously, begrudgingly, these few outliers file out nervously, for the world they once knew has been brought to its knees.

The Super Bowl has become so commercialized, its religious meaning is in danger of being lost completely.