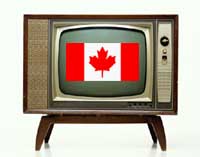 There is a good reason that Canadians have developed a comically stereotypical inferiority complex, and it can be summarized in two words: Superbowl Ads. You see, while the rest of the world is enjoying commercials for various “light” beers, which cost upwards of 2 million dollars (the commercials, not the beers) (except at this one bar I go to where the beer is really expensive), we Canadians get a totally different set of crappy Canadian commercials.

The reason for the poorly alliterated ending to that last paragraph is a concept called “simulcasting”, which is the CRTC's (the Canadian version of the FCC) way of forcing Canadian Content (or ‘can-con') down our throats until we just want to scream out expletives in the general direction of our television sets. But we don't, because that wouldn't be Canadian.

Simulcasting, despite it's fancy-sounding name that kind of sounds like a combination of the words ‘simulating' and ‘masticating', is actually a really simple concept: Hijack an American station's satellite, play the American station's show on your own channel, and then remove all of the commercials the advertisers actually paid for and replace them with commercials of your own. It's like something a James Bond villain would do, but here it's done all the time.

Let me give you a Superbowl-oriented example: Over here, we get CBS on channel 21. We also get a trashy little Canadian channel called Global on channel 8. So what Global decided to do, because they're asses, was to hijack the Superbowl feed and play it on channel 8 AND 21, and both channels showed Canadian commercials. Every night, hundreds of American shows get played here on 2, 3, or even 5 different channels, each showing Canadian commercials. It makes our TV Guide about as reliable as Janet Jackson's halter top.

This brings me to my latest point of contrition: We Canadians may have our fair share of problems, mostly as a direct result of not being able to see Superbowl ads wherein attractive females wax monkey hair off of monkeys, but at least we don't FREAK OUT when there's a nipple on television for a few seconds. Over the last 48 hours, I have read at least a dozen reports from actual journalists demanding an IMMEDIATE INVESTIGATION into this HORRIBLE ATROCITY that has been inflicted upon the YOUTH OF AMERICA. I use the caps lock key only to demonstrate the cataclysmic consequences of this world-changing event.

[We interrupt this update to cross the Canadian 50 yard line.]

[Thank you for your patience, we are working hard to make Canada smaller.]

True story: Back east, there is a French channel that, every night at about 10pm, has a show called “Bleu Nuit” (French for ‘Blue Night' or some such nonsense). In this program, they show various pornographic movies conveniently interspliced with ‘can-con' commercials. Now, you may be thinking, “Oh, sure, those Frenchies may like the boobies, but that's just because they come from some crazy European country like France or Lichtenstein.” Well, the ratings for Bleu Nuit were so good that other (English) channels began copying the format.

A different crappy Canadian network, CityTV, introduced the ‘Baby Blue' films, mostly starring the delectable Shannon Tweed. They also have a show called ‘SexTV' and one called ‘Kink', wherein hideously fat naked people share their love for bondage and domination with the unsuspecting public. And this isn't going on in the middle of the night. These shows are on as early as 6pm, right when I'm trying to eat. (“Oh look, she's tying his penis to a tree like a tire swing. Pass the nachos.”)

My point is, and I'm not trying to sound like a bleeding-hearted liberal here, Janet Jackson's stunt is not a big deal. I don't care if it was intentional, or a total accident, or a stunt that ‘went too far'. I don't care, and neither should you. It's not corrupting the youth of America. That's what the internet is for. If you don't believe me, just check your kid's/little brother's history log. Chances are, if he's over the age of 6, you'll find some reference to the Bangbus. And compared to that, the Janet Jackson thing is like an episode of ‘Leave it to Beaver'.

Not that I ever got to see Leave it to Beaver. But I hear it was a showcase for some great Canadian commercials. Now I have to go. ‘Kink' is on.

More Like This
Quiz: Should You Pretend to Care About the Super Bowl?
Lauren Morris
Resources

The dentist wanted to know if my teeth hurt, so I bit him.