Sports That Make No Sense: Soccer and Hockey

No offense world (and Canada), but your favorite sports puck balls.

I must be the only Mexican who doesn't give a flying shit about soccer. I would rather watch underwater basket weaving as a competitive event than soccer. Don't get me wrong, I commend the players, they are tremendous athletes. That field they play on is enormous and I would not want to run up and down it getting kicked in the face for as long as they do. I also would not want to be forced to ice fist fight a dude with razor blades on his feet to win a hockey game. Having said that, soccer and hockey need to go the way of the dodo. You didn't ask, but I'm about to tell you why these sports are vastly inferior to others.

Do you know what else is popular in the rest of the world? Hating America. Are you a Communazi terrorist who doesn't support the troops? First, let's break down the basics of a sporting event. Assume you're someone who knows nothing about sports, any of them. You're someone who's been sequestered from life and everyday knowledge. Pretend you're Jaycee Dugard… you know, minus the rape. If someone sat you down in front of an NBA game as it started, you could see that it was the first quarter and the clock started at twelve minutes and was counting down to zero. One could easily deduce that the quarter ends when the clock hits zero and that they would play three more quarters in the same fashion. Since they are called quarters it's obvious that there are four of them. This is the basic structure of the game. You'd figure out the scoring and other ancillary aspects as it went on, but that basic premise would be fairly remedial and simple for anyone to catch on to without anyone having to fill them in. Same thing with NFL, except their quarters are fifteen minutes long and NCAA basketball has two halves, each twenty minutes long. It's formatted for ease of use and understanding. Even baseball isn't that hard. You can view the scoreboard and see that there are nine innings on the board, with one team up each inning as you watch and you'll catch on to the balls, strikes and scoring as it happens. It's all quite simple.

Then there's soccer. If you plop someone into a soccer game and they have no clue how it works, they will see a clock at zero start counting up. To where? Who knows! It seems so daunting! That's my goddamn point. I know that it goes to 90 minutes but we're talking about someone who would have no clue how it works. Why not start at 90 and count down? At least then we know how much time is left and it makes sense to new people watching. 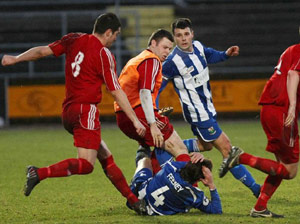 Oh the ball? Well that's not always relevant. Also, I just don't get the rules of soccer. You can jump kick someone in the head but certain players can't go past certain lines on the field? It seems like they're not concentrating on the things that should be important, like not taking a spike to the cerebellum. And I hate the asshole who tries to explain it to me. Every time I say how I hate soccer and don't get the rules, this dick always starts with, "Well it is the most popular sport in the world and…" Hey, let me tell you a few things…

First, fuck you. I live in America and don't give a shit what is popular in Bolivia. If I was a refugee living in an AIDS internment camp I may play soccer too, because hell, what else am I gonna do with the last five months of my life? But I have real sports here in America and I don't need your shitty ones, thank you. Do you know what else is popular in the rest of the world? Hating America. Are you a Communazi terrorist who doesn't support the troops? Get a Yankees hat that coordinates with your V-neck shirt like the rest of the poser douchebags and support an American sport.

Second, I don't give a fuck what the rules are so don't try and tell me. I'm nearly 30 years old, do you think I haven't had sufficient time to figure it out? I'm not too stupid to learn, I'm just too smart to give a shit. Clearly it's not high up on my to-do list so let's just call it good and don't bore me with your diatribe on soccer. I would rather be raped in the ear by a herpes-infested, drunken hobo during an outbreak than listen to one more word about your precious soccer. Ditch the beret and scarf and find that thing you used to call a cock that shriveled up into your belly long ago, and then go fuck yourself with it. Any sport that can end at 1-0 and declare a winner is a waste of time.

Now on to our northern neighbors' retarded ice dance: hockey. This is a sport where they play three periods. What the hell? Are we playing in the damn metric system? Either go to four quarters or two halves, but don't be dicks about it, Canada. Hockey is just as bad as soccer when it comes to the endings, because this fuck bag sport can also end in a tie. Why the hell are we even playing then? You just skated around and got checked in the face with a stick for three periods for a tie? Then there's the fighting. They get to fight but for how long? It's indiscriminate. Just a little while and then we'll stop them. They let them kick each other's asses and then they call it good. Don't get me wrong, I like watching a Canadian get punched in the face as much as the next American but what kind of sport is this? It's like in baseball if on a close tag when running from first to second base the players had to Greco Roman wrestle to determine if he gets the base or not; it makes no sense. So they can punch the crap out of each other but, as in soccer, this player can't go past a certain line before the puck. You can smash someone's face but don't go faster than the puck. 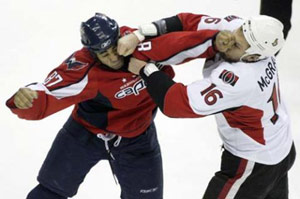 Boxing: gloves and no pads. Hockey: pads and no gloves. Really, the fact that any sport that allows fighting is able to end in a tie blows my mind. If regulation ends and it's a tie then I think it should be a mandatory Royal Rumble-style fight and the last man standing, his team wins. Also, no masks? All these players are missing teeth and have black eyes and they know masks exist… the damn goalie is wearing one, so why not everyone?

Now I'm going to throw you a bone in regard to my favorite sports: basketball and football. I'm a basketball nut and I love me some football but there are a few things that have gotten out of hand. In hoops every time a guy takes a free throw every other member of the team gives him five. He takes a step forward to get a hand slap from the three teammates on the key, and then instinctively extends his arms behind him to get a high five from the point guard too. Really? How goddamn insecure are these players that they need the constant reinforcement and soft caress of a man's touch just to go on with their next shot? Just take the fucking shot and move on. Even when he misses the shot they still come up and give him five. It's become the standard. One would argue that the gesture has become so obligatory that it is completely hollow and empty now. Stop with the stupid high fives at the free throw line already! Look, your entire team wants you to make the basket. No one on your team is muttering under their breath after you nail a free throw that you're an asshole for doing so. You don't need to run down the sideline and pound it with every team member on the bench and the water boy, and then dive into the stands for some crowd surfing because you hit a free throw. You're a professional basketball player and you get paid millions of dollars to put the ball in the basket. Shoot it and let's move on. Spend less time high fiving like you were Maverick and Goose rocking pink, short-short dolphin beach shorts and playing volleyball.

Football is just as bad with their excessive celebration. Every time someone makes a menial tackle in the open field they get up and beat their chests and do the Superman, pantomiming the tearing open of their shirts. All you do is tackle people, we don't need a celebration every time you manage to do your job. You don't see the kid behind the counter at McDonald's Tebowing every time he makes a Big Mac do you? One could even argue that jack-off kid has more right to celebrate anyway, since it's probably harder for him to remember which order the lettuce, pickles, and special sauce goes in than it is for Troy Polamalu to make a tackle.

To bring it back full circle, soccer is still the worst offender. You don't see anyone in any other sport do a rock ‘n roll power slide on their knees when they score a goal. But to be fair, no one ever scores in soccer, so I guess I'd be pretty damn excited too. Of course I'd be smart enough to play a real sport in the first place. And let's find a way to not make NHL and NBA playoffs coincide. Put that garbage head to head with the WNBA and call it a day.

Related
Make Gotham Great Again!
Bashar Salame
Unwritten Laws That Are Laws Nevertheless, and the Advice of Counsel Is Not to Flout Them
Margo Bartlett
What to Make of America’s 2018 Olympic Men’s Curling Gold?
Tim Gregg
An Open Letter to Filmmakers from a Critic
Alex von Sternberg
Resources