You made returning my wedding ring a heartwarming experience.

When I spied your "Frederick Asmus" nametag I nearly dropped my Auntie Anne's Roasted Garlic & Parmesan pretzel out of joy. I knew you would want to hear my story.

Only an Asmus would inquisitively inquire why I was returning my Tacori 18K White Gold Diamond Engagement Ring With A ¼ Cttw Setting. Usually I repeatedly lament, "Have you been betrayed before, sir?" until the automaton jewelry store kiosk worker feels morally obligated to interrogate me. 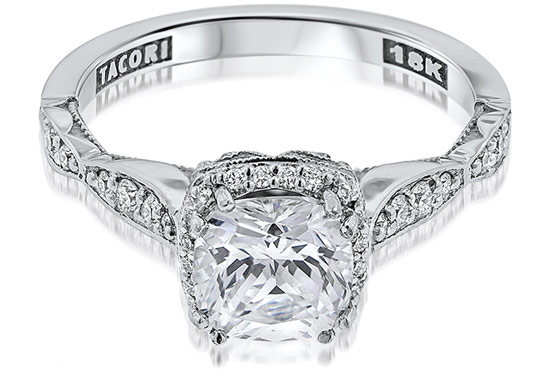 Only an Asmus would allow my soft whimpering about Ursula's infidelity with the paper boy, Jake. Only an Asmus would attentively listen while I detailed Ursula's simultaneous tryst with Mr. Hill, Jake's American History teacher. You even understood how I was okay with the second infidelity since Mr. Hill passed along interesting neo-colonial views during their passionate affair. A Humboldt or Cooper or Johnson could never sympathize so honestly.

Be honest, that commission would have bought penny stocks and a Bosch Tassimo T47 Single Cup Home Brewing System. I WOULD DO THE SAME!

A Stephenson might have stopped me from shouting obscenities so loudly the Zumiez employees gathered outside their storefront to spectate.

But not an Asmus.

Again, I'm sorry for not purchasing any jewelry. But if I know one thing, it's to never trust an Asmus.

Listening to your "Extended 90 Day Jewelry Tarnish Warranty" schpiel was like watching Grandma Elvina convince her kept man Norbert that the dining room chandelier was previously owned by Rutherford B. Hayes.

You certainly inherited our Bohemian ancestors' proclivity for fraud and chicanery!

I'd love to discuss your memories of Grandma Elvina and Aunt Susan more. Why don't you come over next week for some grilled portabellas? Every Asmus loves a succulent portabella over talk of dead relatives and Keynesian economics.

Perhaps you are still bitter though. Next time I promise I'll buy jewelry. I know jewelry kiosk workers live and die by sales commissions. Chatting for an hour and a half about Ursula's penchant for screaming whenever I touched her probably set you back a month's rent. But catching up with a third cousin twice removed is priceless. Family is our true home.

But I also understand the need for real shelter.

So how about you move in? Ursula never let me have a son. I have enough money to take you out of the jewelry kiosk business. You can attend a locksmithing academy or start a pyramid scheme like a real Asmus.

Let's start this family again. Our Great-Great-Grandpa Joseph sailed to America after telling his six Wendel-Schaefer children he was going out to check the temperature.

Do not fret about your previous life Frederick. I looked you up, you only have 382 Facebook friends—that's not much to leave behind.

But maybe you still hate me for pinching pennies on the jewelry front. To be honest, I had my sights set on your Levian Chocolate Diamonds Necklace 14K Strawberry Gold as a parting gift to Ursula. But right when I saw "Frederick Asmus," I knew you would waste the money.

Be honest, that commission would have bought penny stocks and a Bosch Tassimo T47 Single Cup Home Brewing System. I WOULD DO THE SAME!

But I refuse to continue supporting our family's self-destructive habits.

Please set aside your anger and come over for portabellas. I'll even bake some of Grandma Elvina's famous "Pride of Iowa" cookies? The ones with the coconutty crunch!

We can talk about what thread-count bedsheets you will sleep on.

Please don't try to sell me anything though!

More Like This
Open Up and Say “Ariana Grande”
Howard Finkelstein
Yes, I’m Cheating on You with the Ghost of My High School Boyfriend, But Hear Me Out
Lane Koivu
This Fearless Cover Letter Almost Got Me Hired By Bill Gates
Stephen Johnson
Comedy Courses