The National Powder Puff League, Formerly Known as the NFL

Now, I know what you're thinking ladies: Tom Brady is a dime, and you want to screw his brains out, which I believe, is a legitimate view for his hunky self. However, the next motherfucking time I see him whine, and fake his own roughing-the-passer call, I'm going to call up the girl in Precious to sit on his white ass! If you're reading this, Tom, first and foremost, FUCK YOU, and secondly, you're a bonafide pussy who deserves to drown in the abyss along with Dane Cook.

Switching gears here, Dane Cook, you also piss me off, Yeah, that's right, you—Dane Cook—piss me the fuck off in the following, unoriginal ways:

Those were my main three grievances, and as the title suggests, this is a piece on the NPL, not on Dane Cook's piece of shit existence, so I'll move on. 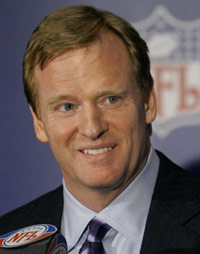 This is Roger Goodell… gone BAD.From what I can tell, Roger Goodell (commissioner of the NFL) is by all accounts, the faggot Satan from South Park. I mean really, look at him for a second….

Okay, times up you fucking retards. As I was saying, Roger Goodell has to be the faggot Satan. I mean, look at the striking resemblance for one. On top of that, they both act all hard in front of their protégé, but behind closed doors, they get butt-fucked by Saddam Hussein. Hey, I mean, that's cool, you like to see homos naked, I understand man (LOL Joe Dirt), but in all seriousness, Roger Goodell is the faggot Satan for the following homosexual ways: 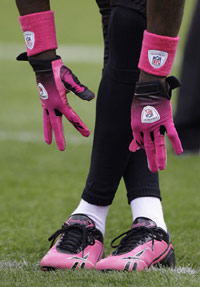 The NFL now supports breast cancer in men.With those points in mind, it's easy to see the simple truth, and in exposing that truth, I have come to the conclusion that the NFL is no longer worthy of the title "National Football League;" it is now downgraded to "National Powder Puff League." Roger Goodell is the cause for this, and I think it is fair to conclude that in the upcoming years we are in store for a lot more pussy shit from him.

What's next on his gay-ass agenda? I believe that the following ideas are not out of the question:

This is my theory on the evolution of the NFL to the NPL. Special thanks to Roger Goodell for being such a pussy ass bitch.