My Week with Carolyn

Disclaimer: Not inspired by the feature film "My Week With Marilyn."

Monday starts like any other Monday for Carolyn: a dead antelope carcass in the bookcase, a vinyl Ludacris album skipping on the stereo, and a Rabbi reciting a fake Torah portion on The Jewish Channel. I nibble on some cold tomato soup as Carolyn emerges from her lair in the laundry room. She mutters something about a Beatles concert she went to in 2002 and then heads to the lavatory.

I ask Carolyn if she likes apples and she says she is more of a plum person. I don't think she understands the joke so I take eleven Benadryl and fall asleep.She comes out eight hours later claiming she has a catastrophic iron deficiency and needs a fresh, organic banana from Whole Foods. Instead, I book two tickets on a flight departing from Hartford, Connecticut and arriving in Tokyo, Japan that leaves in three hours.

We get on the plane and go to Japan.

We touch down in Japan at around 16:00 Army time. I spend two hours converting that to regular time. But I end up converting it into Celsius.

We are staying at a hotel on the outskirts of Tokyo. Carolyn complains about the meerkat infestation because they are not indigenous to this part of Tokyo. However she doesn't have a problem with the possums. We spend the first day in Tokyo sitting in our room reading online about the Mormonism surge in Japan.

Zach Galifianakis comes in to freshen the linens and replace the toilet paper but she doesn't notice. She then jumps out of bed and starts yelling about how she wants to see the Great Wall of Japan. I lasciviously remind her that the Wall is in China. She has PMS about this for the rest of the night. 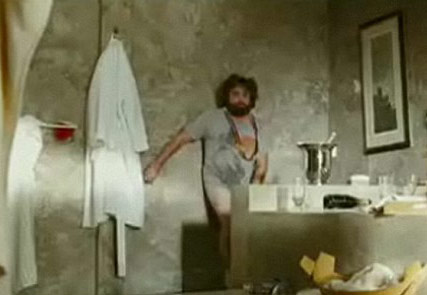 In the morning she makes me oatmeal with chopped up carrots, quinoa, and cinnamon. It is bodacious. We spend the first nine hours of the day in a heated debate regarding the difference between breakfast cereals and dinner cereals. I'm under the impression that they are interchangeable but Carolyn disagrees—respectfully of course. She believes that Honey Nut Cheerios are to be enjoyed at dinner and complemented by a light white wine like Pinot Grigio, but Apple Jacks are to be consumed during breakfast hours complemented by 2% milk or fresh squeezed papaya juice.

We collapse at the table from a combination of exhaustion, dehydration, and hallucinations. I dream of the East Siberian Brown Bear for no reason.

I arise at 37 degrees Celsius and turn on the TV. There is a documentary about the East Siberian Brown Bear on Al Jazeera International. Carolyn gets up and wants to go to a theater production. She forces me to go down and ask the people at the front desk about good local theater. There are productions of Cabaret, Hairspray, Death of a Salesman, Oedipus the King, Spiderman: Turn Off The Dark, and Chelsea Handler's one-woman show Poignancy in the Optometry Business and Other Musings being performed by a Japanese actress named Fran.

Carolyn wants to go to them all so I buy two tickets to a lecture at the Bunkyo Civic Center in Tokyo on legendary screenwriter Richard Linklater given by a controversial professor with alopecia. I enjoy it because I took two years of Japanese at Bellarmine University and have a basic understanding of the language. But Carolyn took Hungarian at Central Arizona College so she gets mad and storms out of the lecture hall yelling about a Bee Gees concert she saw in Seoul in 2005.

We get back to the hotel and she falls asleep on my lap and I wonder if she thinks I'm cute.

We both have to do laundry all day. I make sure to not mix my whites with my darks even though I think that is racist. While our laundry is turning, we play Japanese Boggle, which is basically American Boggle but with Japanese characters.

We spend the rest of the day discussing the Civil Rights Movement and how it relates to Good Will Hunting. I asked her if she likes apples and she says she is more of a plum person even though plums are more of a seasonal fruit and harder to get fresh in the winter. I don't think she understands the joke so I take eleven Benadryl and fall asleep.

I wake up in the Tokyo emergency room with a dislocated meniscus. They let me go eventually. I decide it would be romantic to take a one-day ferry ride to Springfield, Massachusetts from Tokyo, so I get tickets for that on the Megabus website, which is kind of weird. I then take ten Benadryl and fall asleep.

As our ferry arrives in the harbor near Springfield, Massachusetts, I see in the distance that there is construction and I let out a disgruntled sigh. The gentleman standing next to me shoots me a disapproving glance and murmurs something about going to a Van Halen concert in Springfield in 2013. Carolyn is upset because the ferry is late getting in and she wants to see the new episode of Cheers that she claims is on tonight. I regret to inform her that Cheers ended in 1993. She says that she made a mistake and that she meant Alias. I don't have the heart or guts to tell her that Alias ended in 2006.

Carolyn has beef chili on the ferry ride and really needs to poop so I lean in and kiss her. She resists at first but then succumbs to my sexual advance. We make love on the ship and fall into the ocean, landing on a striped dolphin. It brings us to shore. Our luggage is delivered as well.

It was a good week. But Carolyn moved to Toledo, Ohio and we never spoke again.

Related
A Tale of Two Sisters with the Same Damn Taste in Men
Holyn Thigpen
The Lord Has Tempted Me with Tons of Gay Sex, But I’ve Overcome
Evan Purcell
I’d Like to Add 50 More Weeks to My Two Week’s Notice
Jake Mattera
Dear Lady With the Bad Attitude in My 6AM Aerial Class: I Love You
Renata Camara
Resources