Dear High School Class of 2015: Raptors Will Take Your Jobs

The only way to stave off the corporate raptor threat is by networking.

You're probably scared right now. I don't blame you. We live in an utterly horrific world. Every day, people are killed right in the middle of the street, their heads cut off and stuck on javelin poles. It's disgusting and it seems like Congress is just going to keep letting it happen because they're too concerned about Obamacare or transsexual people or Uber or whatever.

But those are all distractions, and that's the first thing you should learn: the government likes to distract you. They put all kinds of pretty buzzwords in the way to trick you into forgetting the things that you should be utterly terrified of. 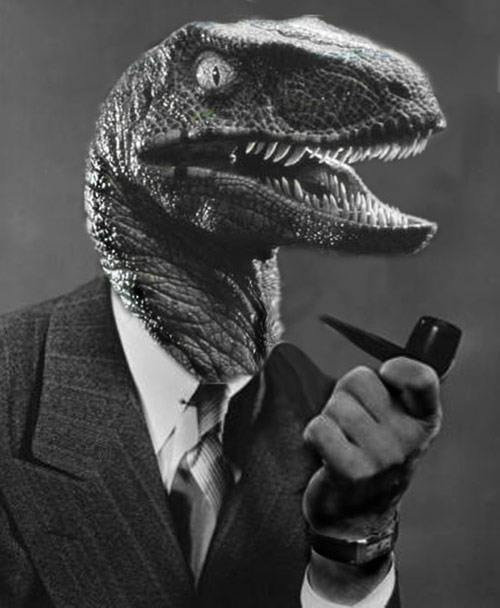 For example, last night I sat in the kitchen wondering if I should eat a Snickers bar I'd been saving since last Friday. It was in my personal storage box under lock and key, to keep my wife from stealing my Snickers and Mountain Dew supply. Why? Because these are the things I consume to keep me awake while I watch YouTube clips of The Dark Knight Rises. This is my right as an American and as a human being, but she thinks it's her prerogative to throw them away because of a numero uno governmental distraction called "diabetes."

There's no such thing as "diabetes" or "gout," graduates. My wife is confused and hateful.

But stealing your Snickers bars and 24-ounce bottles of Mountain Dew is only the tipping point. There are a lot sneaky things out there just beneath the surface of so-called "reality" that you need to be aware of as you go job searching. Things waiting to pop out and cut off your head in the middle of the street.

Last week I saw Jurassic World. Now, you may think this is an admirable yet moot point. "I'm glad you saw such an incredible movie, but what does that have to do with my future, with my safety?" That's a very focused and informed question. Unfortunately, the carelessness with which you have called Jurassic World a "movie" shines a big Coleman 600-watt high-beam lantern on your ignorance.

All I could think about as I watched this movie was, "We live in a very dangerous world." That kept running through my head, over and over and over. Now, some of you may say, "Perhaps that had to do with the 3-liter mix of Mountain Dew and NOS Energy Drink you consumed prior to going into the theater." That's effing ridiculous, graduates.

Listen, now is not the time to argue anyway. Why? Because I've become privy to some serious hazards in our world and I want to lay it on you straight: you're not safe.

Around every turn could be a velociraptor waiting to tear your intestines out with a strikingly bird-like claw. Could they be the antecedents to birds? Let's not argue, okay? Instead, take notes, because this is the first survival instinct you need to internalize: raptor awareness.

Raptors are not just dim-witted lizards anymore. They can open doors, hack your phone. They could steal your car. They're taking your jobs, in fact. Raptors are highly trained in lawn mowing, computer programming, telemarketing skills, etc. They do voices. And while they're exercising those skills and taking your job, they'll figure they might as well rip your intestines out, too.

Weapons won't work. Numero uno mistake number one. That's the biggest mistake people make when they're assembling instincts for the future: accumulating weapons. It never works. If you try to buy a gun at Walmart, for example, then they'll ask you about a DUI you had back in Kansas City in 1986. That was a LONG time ago, but they don't care. They just want the raptor to keep ripping out your intestines.

SO, you can't rely on guns.

And you don't know who or where the raptors are. They could be your friends, your family. Nobody can be sure.

Who are your biggest allies in life? Celebrities. How do you meet them? Networking. Networking is all about knowing people. If you don't know people, anything could happen to you. You could be hit by a car, or someone could beat you up in the alley and take your wallet. If they take your wallet, how will you buy energy drinks?

It's a good thing to think about.

Therefore, networking is absolutely essential. Now, if you're like me, then you don't know that many celebrities. But celebrities are effing important. It's actually very trendy to be a celebrity or to be associated with celebrities. Take advantage of this. For example, make sure that you have lots of celebrity friends so they can teach you the latest cool thing to do or say. This is an important point because, in the future, celebrities will be in charge of everything, and they might not give you and I things if we aren't cool.

Make sure your Facebook profile has celebrities in it. If you don't have any, then you have to find at least one immediately. For example, this past weekend, I befriended Omar Gooding. 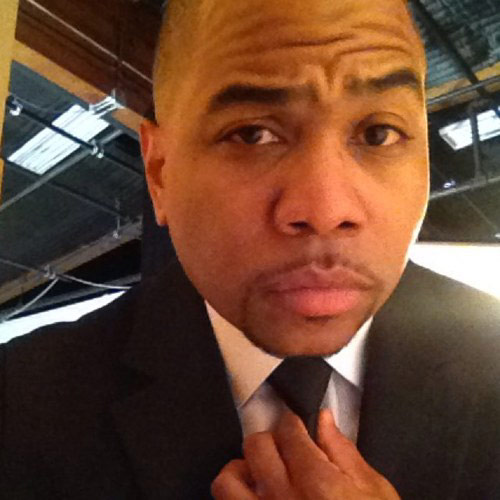 Yes, that's right. THE Omar Gooding. Here's the 411: I was writing an insanely funny list of Glade Air Freshener scents for McSweeney's (effing bomb ass funny) and imagine my surprise when I received a notice on my LG G4 phone that Omar had accepted my request! I immediately stopped work on the list and began including him in my minute-by-minute status updates, making them seem intimate and informal so that people (maybe even Omar) would think we're close. Subtle stuff like: "Omar, how's your car handling?" or "Omar, remember that ice cream?" or "Your new shoes look really comfortable. Did you get them at a store?"

He hasn't deleted me, so it looks pretty promising.

Now, it is possible that Omar could show up at my door. If this happens, then the last thing I would do is panic. It simply means that Omar Gooding has accidentally crossed the fourth wall. But he can easily be placated with a plastic cup full of beautiful blue liquid and asked to perform several "wild" and "crazy" tasks (for example, riding a rollercoaster while holding the cup) without spilling any of the liquid.

EXPECT THE UNEXPECTED: Celebrity Could Be Raptor

Before you say anything, I get it: the numero uno problem with my plan is that the celebrity I've befriended is actually a raptor in disguise. This seems absurd, but, graduates, this is something you have to seriously consider. The horrid truth of the world is that many of the people you meet could be raptors waiting to do something to your car stereo, or change the settings on your LG G4 smartphone, or even post weird liberal messages on your Facebook to further alienate your family and friends, who have already distanced themselves from you because of your "eccentric beliefs."

Last week I decided to fight back.

Background: Three months ago, my wife took it upon herself to both hide my driver's license and the car keys in a location known only to her. She now drives the car to work and the grocery store, and I am forced to go to the library by bike to do research on the world-wide raptor conspiracy. But using only my bike and Meetup.com, I have established a watchdog group to keep tabs on potential raptors in the area. Now, as we all know (at least those of us who have seen Jurassic World), raptors can be trained and converted to reptilian-humanoid servants of the human race. As of late, I have not found any, but I am enlisting you, Class of 2015, to join my Meetup.com group and assist in the hunt and conversion of these creatures.

We have a small coterie of hard-working, 100% human beings. I have assured them, and will do so to you now, that Omar Gooding is a 150% Facebook friend and 250% red-blooded human being. Our club has open membership and if you join now then you will not have to pay the $20 membership fee. Also, you will receive a free Wild & Crazy Kids t-shirt that can be worn in public to help other like-minded, in-the-know citizens identify a fellow of the fold.

Currently, we are looking for graduates with computer typing skills and a driver's license. If you have a suit or suits we can borrow for job interviews, that would be helpful too.

Looking forward to seeing you at the next meeting!

Related
Preparing Your Obituary
Mike Morris
5 Ways to Forget Your Ex by Redecorating
Jeff Shermack
Your Therapist Here, Addressing Your Concerns: Yes, I Hate You
Derek Mari
Hi! It’s Me, the Girl Who Bullied You Relentlessly in High School and I’ll Be Your Coronavirus Nurse!
Ellie Poole
Resources

Forget Punxsutawney Phil: Other Woodland Creatures and the Predictions They Make
Jason Garramone
Moo Moo, Your Childhood Stuffed Animal, Is Filing for Emancipation
Alex Jhamb Burns
As Your Primary Care Doctor, I Will Be Happy to See You in Three Weeks When Your Symptoms Have Passed
Brad Snyder
This Aesthetic Subway Ad Is Here to Tell You That You Are Going Bald as Shit
Chris Logan